England women’s football star Eni Aluko is subjected to a torrent of abuse after suggesting some furloughed Britons are enjoying a culture of ‘do-nothing entitlement’.

Top lawyer Aluko said on Twitter that people currently on 80 per cent of their wages thanks to a Government bailout during the coronavirus crisis are enjoying not working.

In a tweet she has since deleted, Aston Villa’s Women’s Sporting Director wrote: ‘As expected, the same people baffled about what returning to work means are crystal clear and tweeting with joy about the extension of furlough to October. Furlough is needed but has perpetuated a culture of do-nothing entitlement.’ 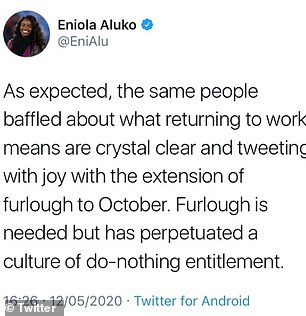 Her remarks came as Chancellor Rishi Sunak today confirmed that people living off the furlough scheme will be able to do so until October. He also quashed fears that the amount would be reduced to 60 per cent.

Match of the Day pundit Aluko faced an outpouring of rage on social media, with Twitter user Freddie Shires writing: ‘Eni Aluko proving herself once again to be a proper wrong’un.’

And @mufcdan_87 mocked her for deleting the post, saying: ‘I see Eni Aluko has been deleting tweets again. Daft as they come, her.’ Social media user Tom Vigo called the ex-Chelsea women’s player a ‘t***’.

But the former Juventus player hit back at criticism, responding directly when Twitter user Graham Hackney asked why she’d deleted the original tweet.

‘Couldn’t be bothered with all the sensitive negative people on Twitter,’ she wrote. ‘Should have tweeted how incredible furlough is, that would’ve elicited a lovely response.’

Aluko became a poster girl for women’s football who made Match of the Day history by becoming the first female pundit to appear on the show back in 2017. It came after she sensationally left the squad, blaming staff who would ‘undermine and belittle’ players and accusing manager Mark Sampson of racism. 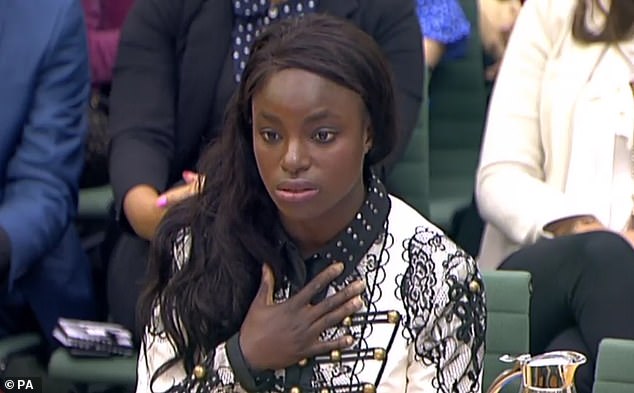 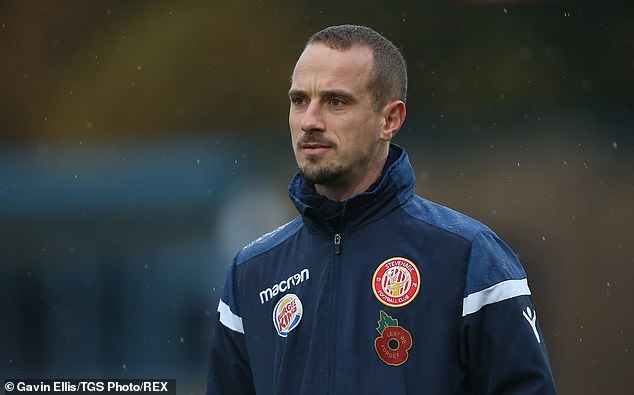 The FA conducted an internal review and an independent investigation into the allegations which found no wrong-doing by England manager Mark Sampson or his staff.

However, after the investigation was concluded in March this year, the FA still gave the 30-year-old forward a new £20,000 contract, despite her saying she was not available to play ‘under his [Sampson’s] management’.

On top of that she was given an extra £40,000 and asked to sign a confidentiality agreement – though the FA claims that was to ‘avoid disruption to the [2017 European Championship] tournament,’ not to ‘prevent disclosure’.

It was alleged that while talking about signing a new player on September 2, 2019, Sampson said: ‘…a black Nigerian centre back, you can’t rely on them.’

But a later hearing found the charge not proven and it was dismissed. The findings of the hearing also found that Sampson was branded as a ‘snake and spineless c***’ by former Stevenage boss Dino Maamria.