A feral cat about three times the size of a domestic animal has been spotted in Australia’s Simpson desert carrying a huge sand goanna it had just killed.

Researchers captured the cat on film at the Ethabuka Reserve near the Queensland-Northern Territory border on wildlife cameras they’d set up to study decomposing animals in the desert.

The photograph shows the stark reality of Australia’s feral cat problem, with the pests responsible for killing three billion native animals each year.

Scientists believe feral cats have been directly responsible for the extinction of 34 mammal species since they arrived in Australia 200 years ago. They have also decimated the populations of other species, with at least 123 now threatened with extinction because of feral cats.

University of Sydney researcher Emma Spencer told ABC News feral cats usually feed off mice and birds, but they have been known to scavenge larger animals.

‘This goanna could weigh up to six kilograms, that’s quite large prey for a cat,’ she said.

‘But I definitely say that a cat that size would be very capable of taking out a sand goanna,’ she said.

She told the North West Star while they don’t have the kill on camera, the cat didn’t  just happen upon a dead goanna, but had killed it for food.

‘Sand goannas are very strong creatures and very fast so they are difficult to kill,’ she said.

‘There’s no doubt the cat killed this goanna.’

However, biosecurity officials said ferals eating animals the size of the goanna was not unusual. 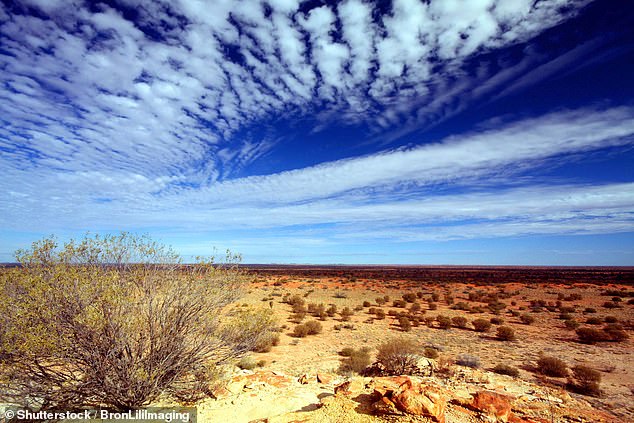 There are an estimated 5.6million feral cats which cover just about every corner of Australia, Biosecurity Queensland said.

They eat everything from fish, frogs and insects to birds and marsupial, insects, fish and amphibians.

‘We’ve seen similar photos through our research of cats dragging back killed wallabies … to feed offspring,’ he said. 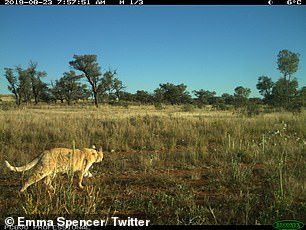 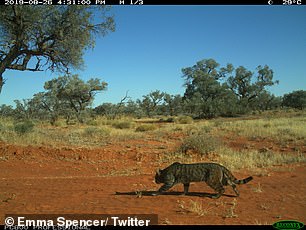 The photo was taken back in 2018, but only discovered two years later.

Researchers uncovered the image while trawling through footage off the wildlife cameras earlier this month.

Social media platform Reddit blew up over the image, with many astounded by the cat’s size.

One suggested feral cats would ‘evolve to be the size of tigers’ in 30 generations, while others shared their own stories of encounters with the wild animals.

Many took it as an opportunity to call for better management of cat species, because of their impact on Australia’s native wildlife.

‘It’s time to seriously consider a ban on all feline pets. They are destroying local wildlife, soon they’ll have an impact on the environment,’ one wrote.

WHAT DO FERAL CATS NORMALLY EAT?

Feral cats help themselves to a phenomenal number of species in Australia – 400 different vertebrates. This includes:

Feral cats also eat many threatened species in Australia, and have been implicated in the decline of many species including the bilby, numbat, and western ground parrot.