An electronic nose could spare thousands of lung cancer patients from enduring brutal side effects of immunotherapy, scientists say.

A trial of the gadget found it could sniff out whether patients will have an adverse reaction to the pioneering drugs with 85 per cent accuracy.

Patients breathe into the device, which then uses AI and takes just one minute and to identify whether or not the patient is likely to respond to immunotherapy.

Lung cancer kills 36,000 Britons every year and around 50,000 are diagnosed with the disease annually.

Sufferers can be treated with immunotherapy drugs, which utilise patients’ own immune system to fight back and destroy cancer cells.

While the medicines tend to have fewer side effects than chemotherapy, they can sometimes cause the immune system attacking healthy cells.

This can cause muscle aches, shortness of breath, headaches, diarrhoea and flu-like symptoms.

In very rare cases the drugs cause the immune system to go into overdrive and attack vital organs.

Dutch researchers say the ‘eNose’ can smell volatile organic compounds (VOCs), chemicals which make up about one per cent of our exhaled breath.

By detecting how many different VOCs are in the lungs, the device is able to predict whether the patients will respond to the drugs.

Immunotherapy drugs attack a protein that is called programmed death ligand 1 (PD-L1) – but they are only effective on 20 per cent of patients.

The protein is thought to dampen and weaken the immune system when non-small cell lung cancer – the most common lung cancer – strikes.

Immunohistochemistry is the only test available to predict who will benefit from the treatment but it requires medics looking at lung tissue to spot the protein.

Michel van den Heuvel, who led the research at Radboud University Medical Centre, warned it is invasive and takes too long to obtain results.

The researchers thought the eNose technology could be a non-invasive and rapid alternative to the current standard. 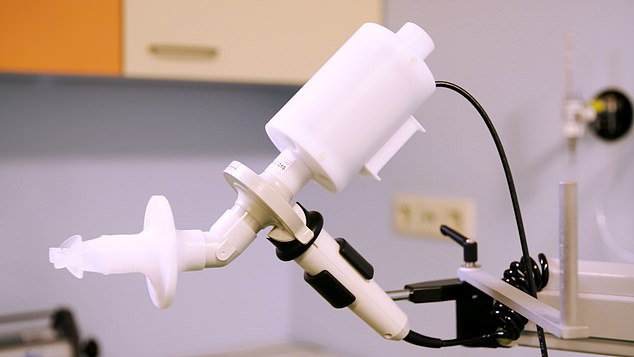 WHAT IS NON-SMALL CELL LUNG CANCER?

Non-small cell lung cancer (NSCLC) is the most common form of the disease (80 per cent of cases) and includes three specific types of tumours.

It includes adenocarcinomas, squamous cell carcinomas, and not otherwise specified types of NSCLC.

Adenocarcinoma is cancer which develops from mucus-producing cells in the airways.

This is the most common form of NSCLC and accounts for around 30 per cent of all lung cancers.

Squamous cell carcinoma develops in the flat cells which line the airways.

Not otherwise specified types of the cancer are when doctors cannot be certain what type of lung cancer the patient has, but this is uncommon.

Co-author Rianne de Vries, a PhD student at Amsterdam University Medical Centres, added that it may allow doctors to ‘avoid treating patients with an immunotherapy to which they would not respond.

‘When using the eNose, the patient takes a deep breath, holds it for five seconds and then slowly exhales into the device.

‘The eNose sensors respond to the complete mixture of VOCs in the exhaled breath; each sensor has its highest sensitivity to a different group of molecules.

‘The sensor readings are sent directly to and stored at an online server for real-time processing of the data and for ambient air correction because the air that you exhale is influenced by the air that you inhale.

‘The measurement takes less than a minute, and the results are compared to an online database where machine-learning algorithms immediately identify whether or not the patient is likely to respond to anti-PD1 therapy.’

Between March 2016 and February 2018, the researchers at The Netherlands Cancer Institute, Amsterdam, recruited 143 patients with advanced lung cancer.

They used the eNose to take the breath profiles of the patients two weeks before they started treatment with immunotherapy drugs nivolumab or pembrolizumab.

After three months they assessed whether the patients were responding to the treatment or not.

Co-author Dr Mirte Muller, a PhD student in the department of thoracic oncology at The Netherlands Cancer Institute, said: ‘We found that before the start of treatment with immunotherapy, the eNose analysis of exhaled breath from the patients with non-small cell lung cancer could distinguish between responders and non-responders with an accuracy of 85 per cent.

‘Our findings show that breath analysis by eNose can potentially avoid application of ineffective treatment to patients that are identified by eNose as being non-responders to immunotherapy, which in our study was 24 per cent of the patients.

‘This means that in 24 per cent of lung cancer patients this treatment could be avoided, without denying anyone effective treatment.’

Professor Charles Swanton, Cancer Research UK’s chief clinician, said: ‘This small study adds to increasing evidence that looking for telltale signs of cancer in people’s breath could one day be useful for doctors deciding on the best treatments for their patients.

‘Immunotherapies are already transforming the way we treat some people with lung cancer, and research like this is helping us understand who is more likely to benefit.

‘Larger studies are needed to understand the potential of this innovative technology, where researchers can compare the cost and effectiveness of eNose to existing indicators of immunotherapy response.’

The findings were published in the cancer journal Annals of Oncology.

IS LUNG CANCER ROUTINELY SCREENED FOR IN THE UK?

There is no national screening programme for lung cancer in the UK.

Unlike smear tests for cervical cancer and mammograms for breast tumours, lung cancer is not routinely tested for.

The NHS claims there is no screening that has been proven to save the lives of people with lung cancer.

Low-dose CT scans have been investigated, however, these carry risks.

The lungs are reportedly very sensitive to radiation and frequent scans may actually cause damage.

And screening may lead to overdiagnoses.

Some lung cancers that are picked up via scans may never become life-threatening, the NHS claims.

These patients may then have unnecessary treatments that cause side effects and anxiety.

Research is underway to find an accurate lung-screening method.

One possibility is a spiral CT scan, which uses lower does of radiation than standard CT scans.

The National Lung Screening Trial found this reduced the number of at-risk patients who died from lung cancer.

But it also led to overdiagnoses.

Another option is fluorescence bronchoscopy, which uses blue and white light to examine the airway’s linings.

One study found this picks up on changes that may become cancerous.

However, the NHS adds more research is required before this approach can be considered for a lung-screening programme.

Another approach is to look for chemical changes in the body.

And a study called MEDLUNG is analysing whether changes to cells in high-risk people’s mucus could indicate cancer.

In the US, the American Cancer Society recommends current or former smokers, who are at a higher risk, undergo a low-dose CT scan once a year.