Enough to make you cry! The prong up your nose that helps to dry eyes

An electric probe stuck up the nose could be an unlikely new treatment for dry eyes.

The gadget works by zapping a nerve in the bridge of the nose with a mild electric current to stimulate the production of tears — easing the dryness that causes eyes to become sore, red and inflamed.

At the press of a button, the hand-held device, called TrueTear, triggers the release of tears, coating the eye surface and soothing irritation.

The rechargeable zapper is not a cure for dry eyes, but research suggests that, used twice a day, it can significantly improve symptoms.

Result: The rechargeable zapper is not a cure for dry eyes, but research suggests that, used twice a day, it can significantly improve symptoms

In trials, it more than doubled the volume of the water, mucus and oil that make up the tears that coat the eyeball to keep it healthy.

Dry eye syndrome develops when the eyes don’t make enough tears, or the tears they do produce evaporate too rapidly. Symptoms include gritty, sore and red eyes, which tend to worsen as the day goes on.

Current treatments include over-the-counter drops designed to mimic the effects of tears, or an ointment to lubricate the eyes.

But many sufferers dislike using drops because of the discomfort of putting them in, or they lack the co-ordination to administer them without spilling the liquid down their face.

The TrueTear, which has already been approved by the U.S. Food and Drug Administration, could be a more popular alternative.

It stimulates the trigeminal nerve, located at the top of each nostril near the bridge of the nose. This is one of the largest nerves in the skull, and stimulating it activates a process called nasolacrimal reflex — the automatic generation of tears to lubricate the eye. 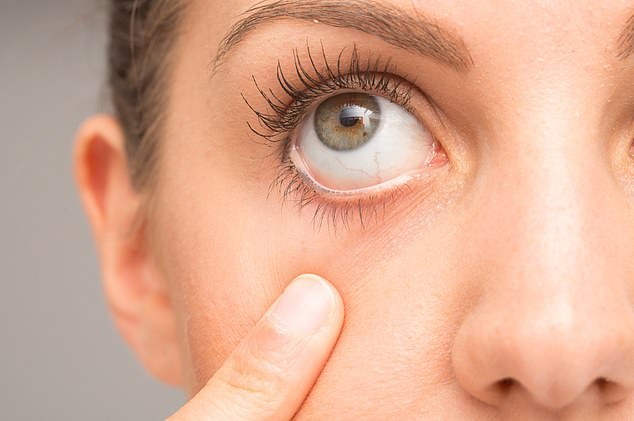 Game-changer? Current treatments include over-the-counter drops designed to mimic the effects of tears, or an ointment to lubricate the eyes

To use the TrueTear, the patient must unwrap a sterile, two-pronged ‘tip’ from a sealed pack and plug it on to two tiny sockets on the top of the hand-held unit.

The matchstick-size prongs, made of metal and covered in silicone, are inserted deep into the nose, one in each nostril, so the tips are as close as possible to the top of the nostril. This means inserting the prongs as far as possible and then tilting them towards the front of the nose, so they press on the tissue where the trigeminal nerve is located.

The patient then presses the button and a mild, painless electric current then passes through the prongs and stimulates the trigeminal nerve. The device should be held in place until tears start to form.

The tip must be replaced after two days of use because a gel coating on the prongs, which helps to transmit the current into the nerve, starts to dry up.

The manufacturer, Allergan Inc, claims regular stimulation gradually encourages the production of tears even between treatments. Tests on 97 patients over a six-month period at Virginia Medical School in the U.S. showed the nose zapper on average doubled tear volume — easing dryness.

But one in ten experienced nasal pain and 5 per cent had a nose bleed after inserting the device.

Melanie Hingorani, a consultant ophthalmologist at Moorfields Eye Hospital, London, said the nose probe might help some patients, but ‘there is no certainty that the effects are prolonged or maintained, or proof the health of the eye is helped by it’.