The moment a four-wheel-drive motorist side-swipes a cyclist in the bike lane and sends him flying into the footpath has been captured on dashcam.

In what is seemingly a shocking case of road rage, the enraged driver then jumps out of the car and yells at the visibly shaken cyclist before throwing his bike into the bushes.

After his tirade against the cyclist, he jumps back into his car and continues his journey.

The footage of the apparent road-rage attack has been shared online by a cyclist’s group, which claims the driver was charged with reckless driving causing injury and fined $1000.

The SUV driver was driving alongside a cyclist, who was riding inside the bike lane, down a two way street when he sharply swerved his car

The footage comes after a spate of road rage incidents targeting cyclists.

Cyclists were urged earlier in the year to fit cameras to their bikes to record any incidents of dangerous driving. 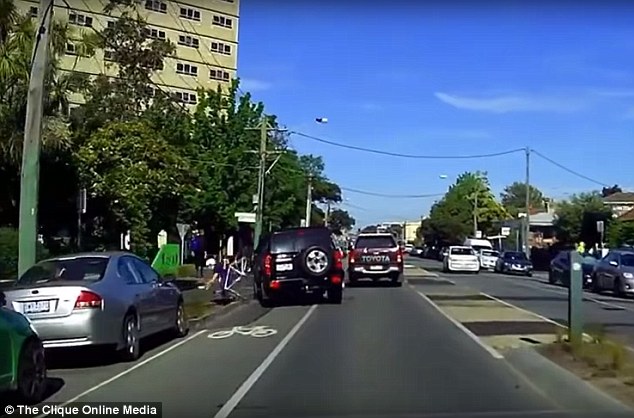 A car must remain at least a metre away from any bikes on the road, or risk a $400 fine and four demerit points.

While lobbyists argue the laws have had little effect to deter drivers, at least 65 people have been fined in New South Wales since they were implemented.

While reported incidents far exceed this number, it is often hard to prove any wrongdoing without footage of the incident. 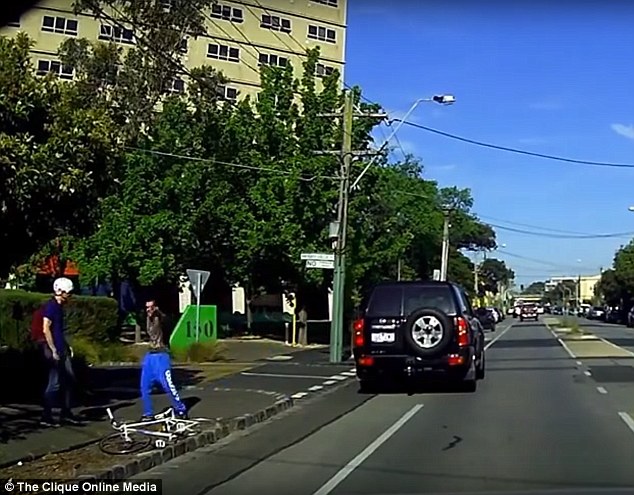 But before he even had a chance to make sure he wasn’t injured in the accident, the driver had parked his car, blocking off a side street’s access to the main road