Boris Johnson took personal control of a Chinese situation today – hosting colourful dragons in Downing Street while ministers were nearby discussing the deadly coronavirus outbreak in the Far East.

He hosted figures from the British-Chinese community in the heart of Westminster ahead of the lunar new year on Saturday.

But the festivities to herald in the Year of the Rat in 2020 came as the Government held a Cobra crisis meeting to discuss the coronavirus outbreak.

The meeting in Whitehall was chaired by Health Secretary Matt Hancock, after 14 people in the UK were tested for the virus, with five given the all-clear.

Cases have been confirmed in China, the US, Japan, South Korea, Thailand, Singapore, Macao, Taiwan and Vietnam.

He hosted figures from the British-Chinese community in the heart of Westminster ahead of the lunar new year on Saturday. 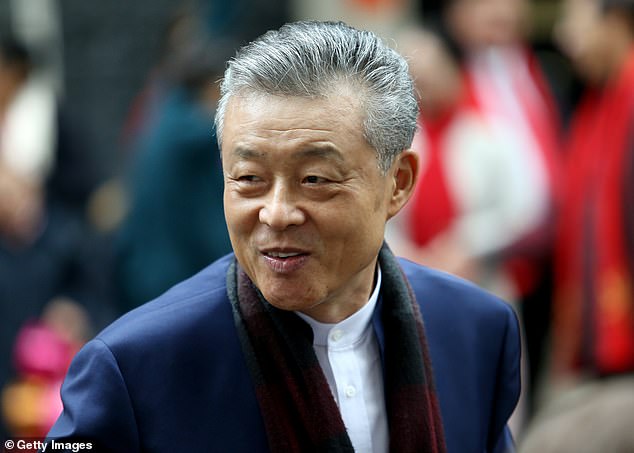 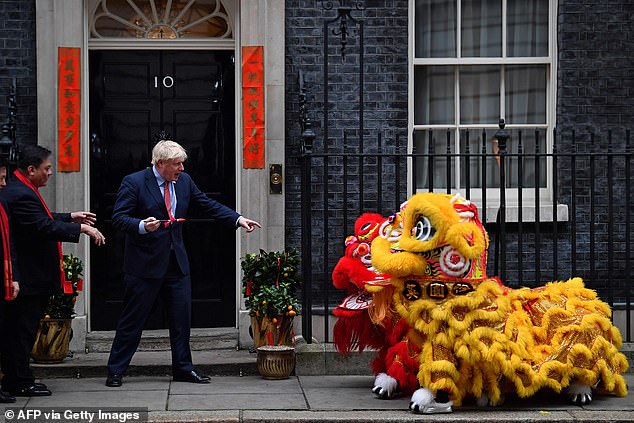 Mr Hancock said the risk to the UK public ‘remains low’ as he left the Cabinet Office.

‘We have just held a Cobra meeting on the coronavirus concerns,’ he said.

‘As I made clear to the House yesterday, the clinical advice is that the risk to the public remains low and the chief medical officer will be making a full statement later today.’

The Scottish Government confirmed on Thursday that five people were being tested after presenting with symptoms of the illness, while it was understood that another patient was tested at Belfast’s Royal Victoria Hospital.

Two of those being tested in Scotland had been diagnosed with flu after travelling to Wuhan in China – the origin of the global outbreak.

Meanwhile, the official death toll in China has risen to 26 with more than 830 confirmed cases. 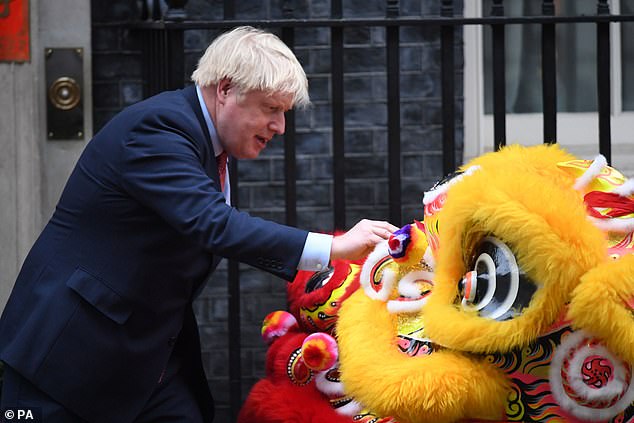 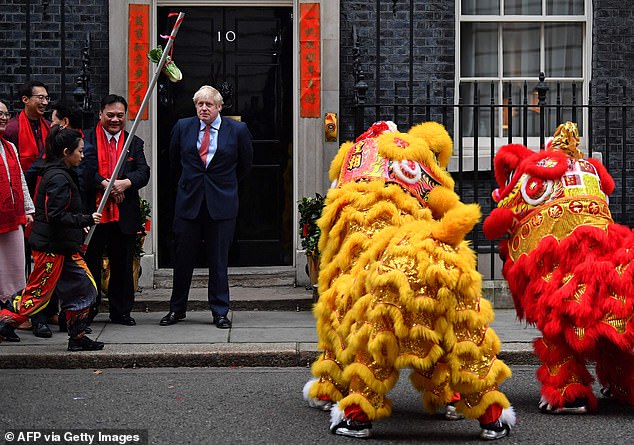 The Chinese city of Wuhan is rapidly building a new 1,000-bed hospital to treat victims of a new coronavirus, while Disneyland Shanghai and parts of the Great Wall of China have been closed to visitors.

Reuters reported that hospitals in Wuhan are struggling to cope due to medical shortages.

Speaking on the BBC Radio 4 Today programme, Professor Paul Cosford, emeritus medical director at Public Health England (PHE) said: ‘I think it’s highly likely that we will have cases in the UK.’

Speaking on BBC Breakfast, he said anyone who has travelled to Wuhan in the last two weeks and returned to the UK, and who has symptoms, must get in touch with the NHS.

Symptoms of coronavirus include fever, sneezing and coughing.

Prof Cosford said: ‘We will not be surprised if people return from China to the UK with the infection, the important thing is that if you are one of those people and you develop symptoms you get in touch quickly.

‘We are testing anybody who meets the criteria. The numbers aren’t the important thing, the important thing is that anybody who has been to Wuhan in the last 14 days and has symptoms, respiratory symptoms that could represent this virus … that we ask them to phone NHS 111 and then we can arrange any appropriate testing.’ 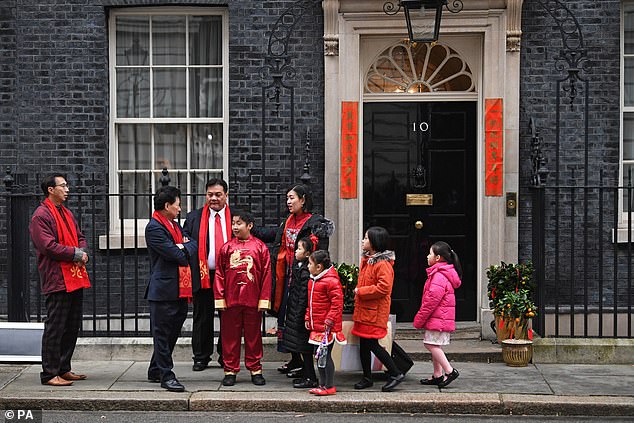 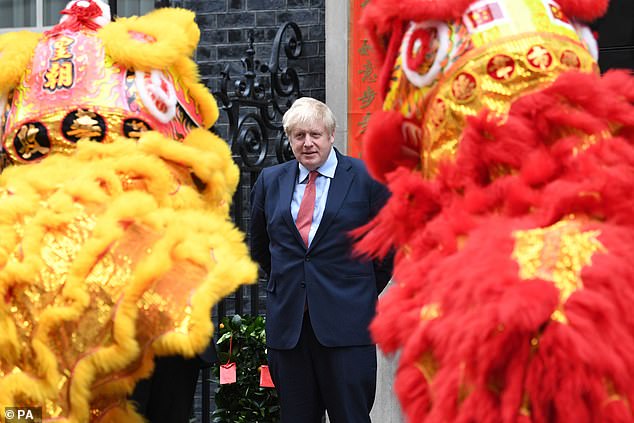 He said there was no precise figure for how many people have been in contact with the NHS who may have symptoms.

‘All our GPs and hospitals across the country have had a letter from the Chief Medical Officer and the medical director at NHS England and us at Public Health England, so that if somebody does present and they are worried, if they do meet our criteria, that they will be put somewhere where they won’t infect other people while they’re assessed and while we can get them tested.’ 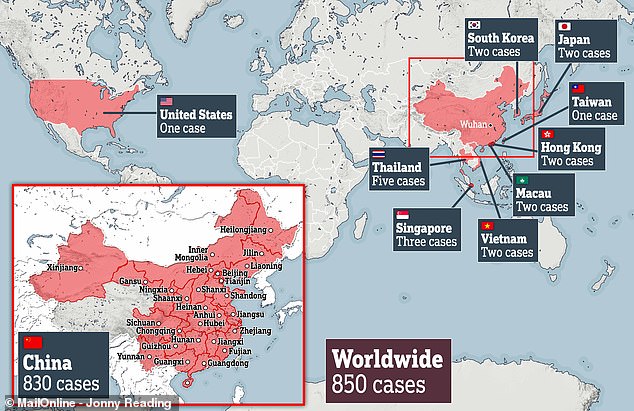 Chinese authorities say 26 people have died and now more than 800 people have been infected across the world, with cases cropping up in the US, Vietnam and Singapore 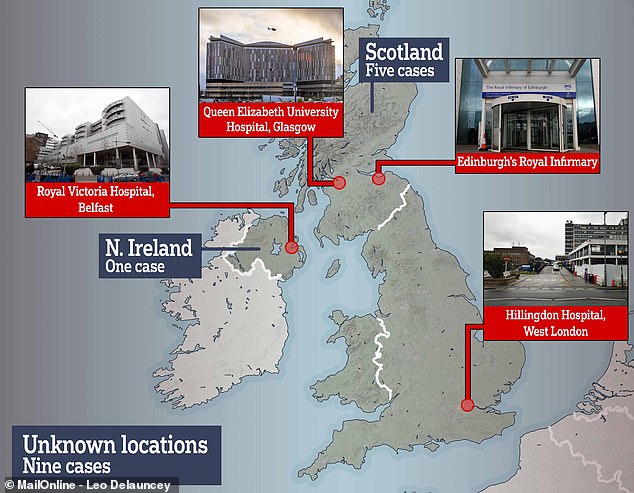 Scottish officials yesterday confirmed they were testing five cases in Edinburgh and Glasgow ‘as a precaution’. Another man was being tested in isolation at the Royal Victoria Hospital, Belfast, and there was a suspected case in Hillingdon, west London. Public Health England has still not revealed where the other cases are. Many are thought to be Chinese tourists

Asked if face masks could provide protection, Prof Cosford said PHE was not advising people to use face masks at the moment, but is monitoring developments carefully.

If a GP suspects a patient has coronavirus, they should be placed in a room away from other patients and staff with the door closed, the PHE guidance states.

They should not be allowed to use communal toilet facilities or be physically examined, it adds.

A letter from the Chief Medical Officer to clinical staff said anyone who is confirmed as having the virus will be transferred to an Airborne High Consequences Infectious Disease centre (HCID).

According to Public Health England, there are four interim Airborne HCID centres in England – two in London, one in Liverpool and one in Newcastle.