Enthusiasts come together for sport known as ‘skijoring’

Enthusiasts come together to celebrate teh spectacle of as ‘skijoring’- a winter sport where a skier is pulled along by a horse, dog or even a vehicle

It’s an unusual past-time many will not have heard of before.

But ‘skijoring’ – a partnership bringing together cowboy and ski culture – is attracting many followers in the American heartland.

Skijoring is a distinctly Western tradition that brings together cowboy and ski culture into an entertaining spectacle that requires coordination between a horse, rider and skier.

The Big Sky Skijoring Association recently held a two-day competition on February 9 to 10. It was the fourth of eight races on the Skijoring America circuit which includes stops in Colorado, Wyoming, Idaho and Montana.

The event had 91 teams competing in junior, women, novice, sport and open categories. Each team was allowed one run a day.

However each run had different combinations of horse, rider and skier allowed individuals more than one run per category.

A horse and rider tow a downhill skier on a 33-foot rope through a course fraught with jumps, gates, banked turns and sometimes rings for skiers to collect on their arms.

It is thought that the origins of the so-called sport are in Scandinavia where it was used a mode of winter transport that involved a rider directing a horse via long reins from a set of skis behind the steed.

Justa Adams, the Big Sky Skijoring association board member who organized the race, told Explore Big Sky: ‘I’m absolutely thrilled from the feedback from all the competitors, skiers and riders.

‘It was a very fun and safe event. I could not be happier with how it turned out.’

Dozens of spectators stood on snowbanks piled high along a track encircled with orange plastic fencing, while inside the track, skiers were being pulled by rider-guided horses.

Skijoring started back in the early 1900s and was an exhibition sport at the 1928 Olympics. The term is Norwegian and can be loosely translated as ‘ski driving.’ Not only have horses been used to tow skiers but also dogs, snowmobiles and cars can be used.

Tim Evans, (pictured) from Casper, Wyoming, competes in the skijoring event during the Sundance Winter Festival in Wyoming on Saturday and is pulled along by a horse and rider 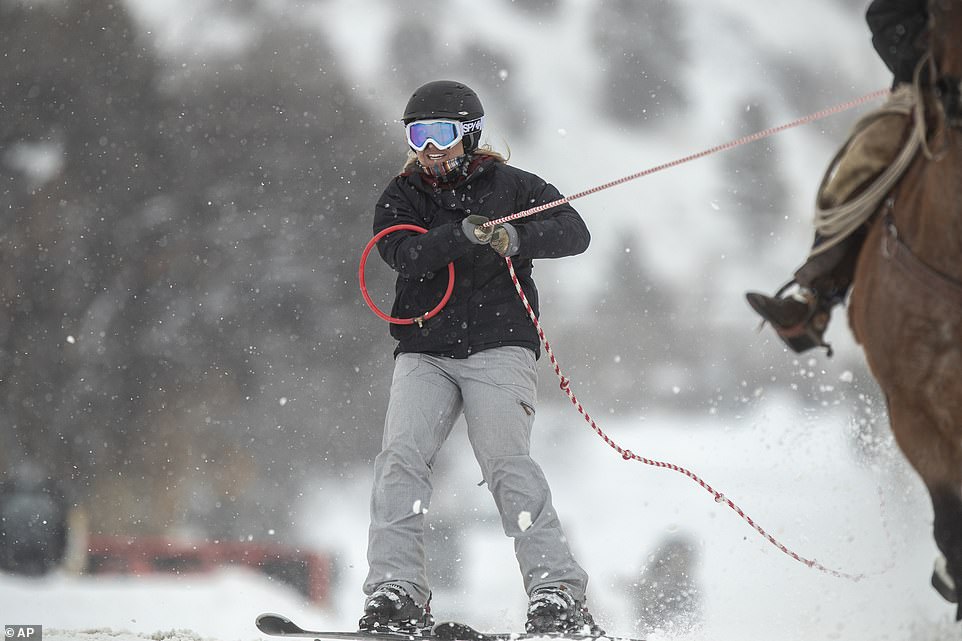 Shannon Gaylord , (pictured), looks like she is enjoying herself in a skijoring event during the Sundance Winter Festival 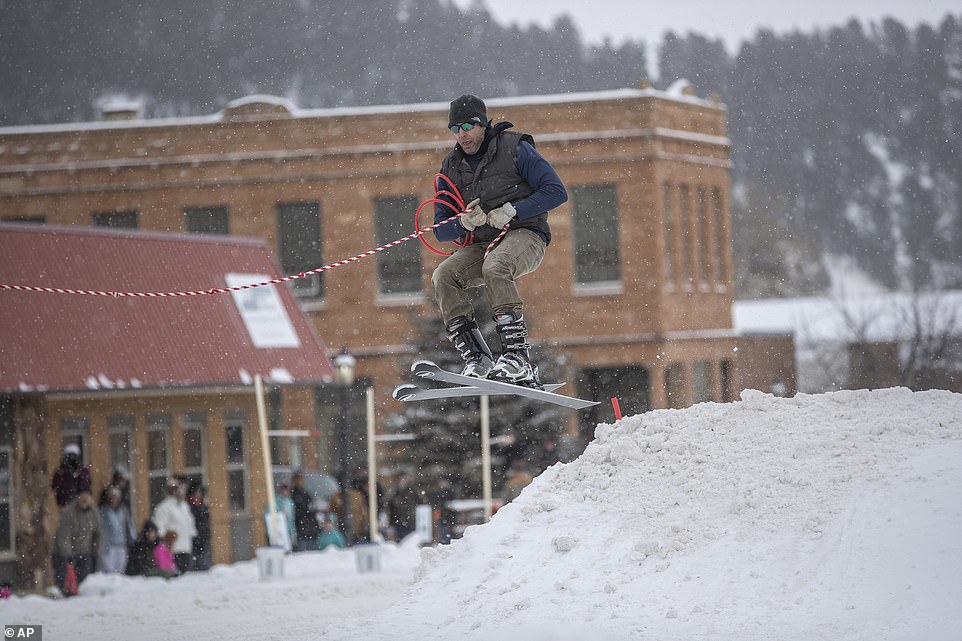 Kevin Wilson, (pictured), is riding how as he competes in a skijoring show during the Sundance Winter Festival 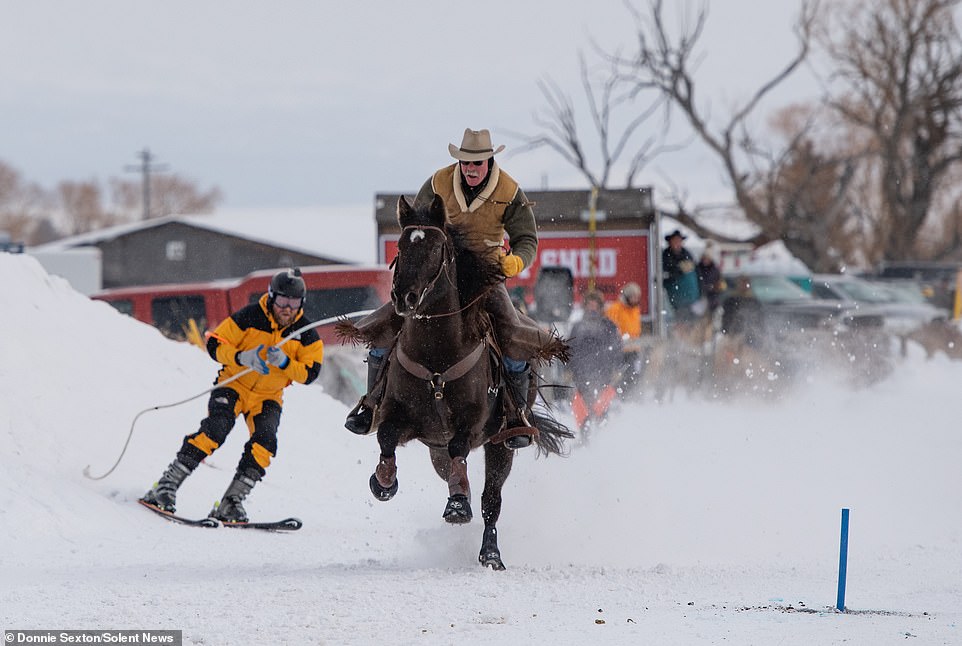 A skier is (pictured)attached to 78-stone horses as they thunder down a snowy race track compete in a bizarre sport known as skijoring. Horses and riders are specially trained to pull the skiers who are attached to the animals by a tow rope. The competitors are seen here tackling jumps and obstacles as they race down a street in Helena, Montana 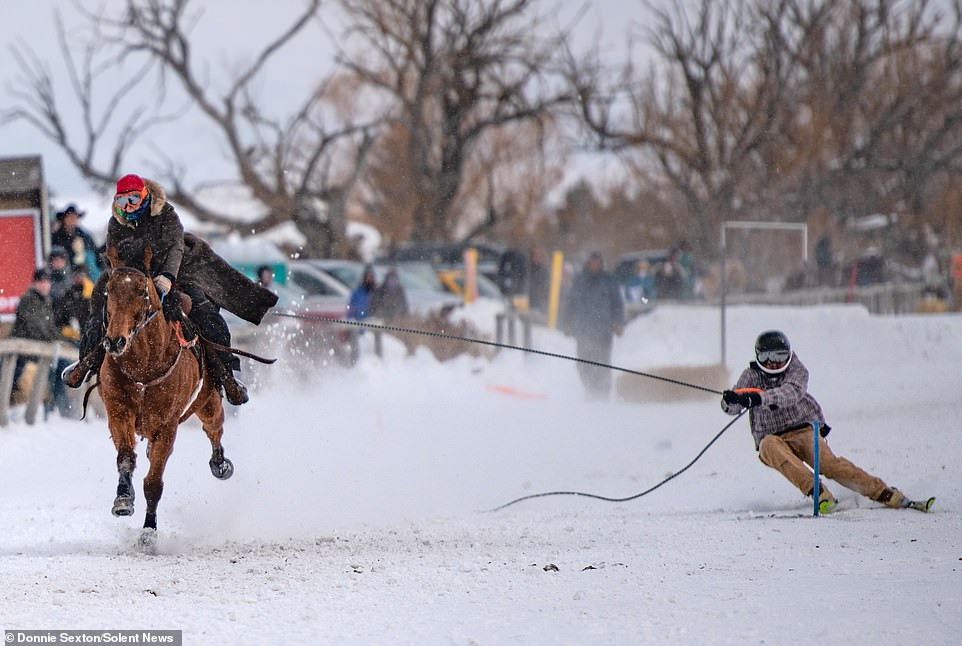 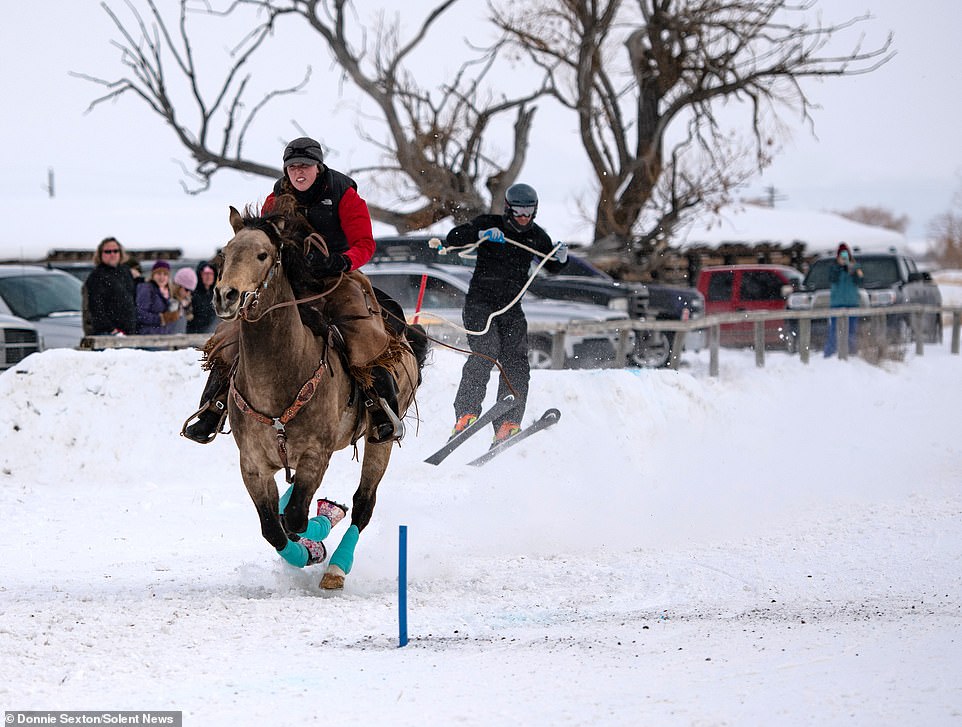 Dozens of spectators stood on snowbanks piled high along a track encircled with orange plastic fencing, while inside the track, skiers were being pulled by rider-guided horses 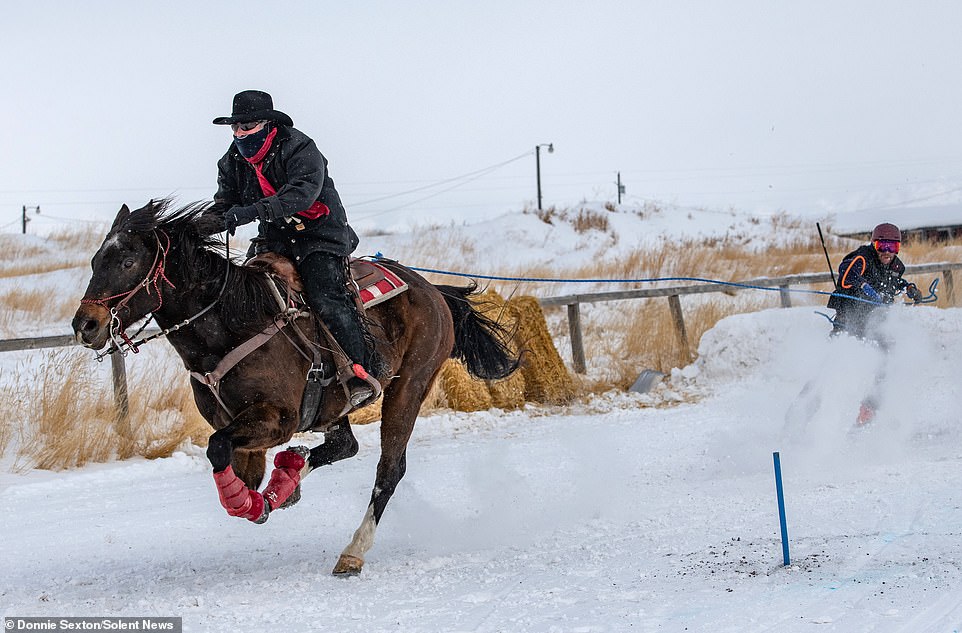 The Big Sky Skijoring Association recently held a two-day competition on February 9 to 10. It was the fourth of eight races on the Skijoring America circuit which includes stops in Colorado, Wyoming, Idaho and Montana 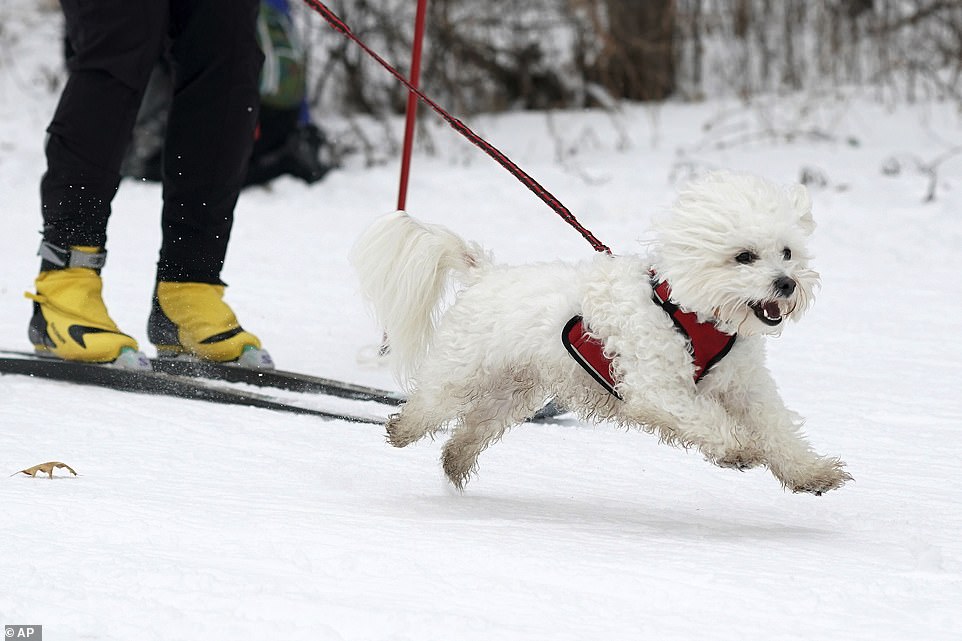 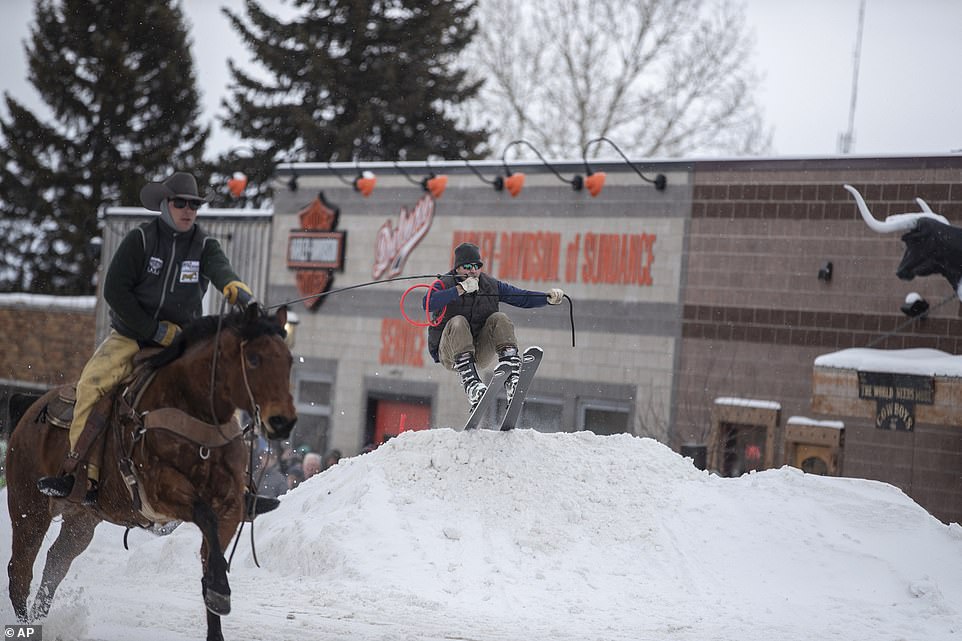 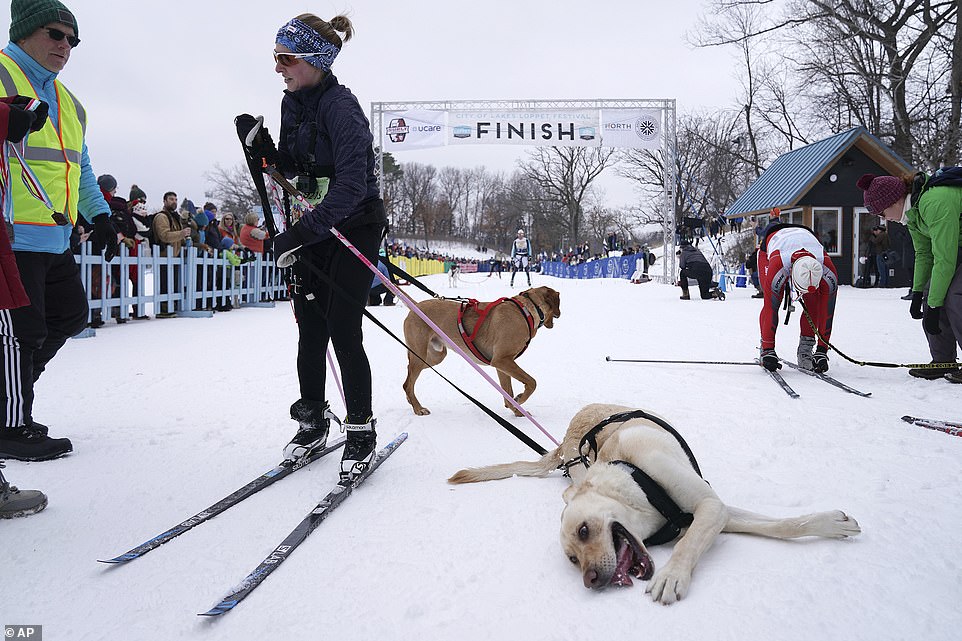 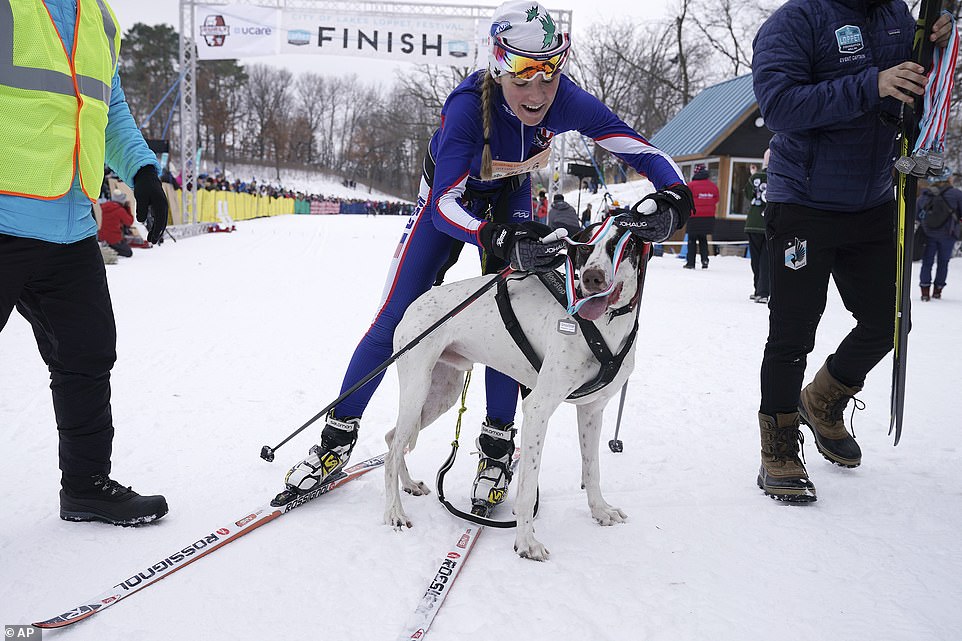 Jessica Pulliam puts her medal on her dog Boyzen, a 3-year-old greyster, after completing the Skijoring Loppet on Saturday