Not one of the squadron’s four gunboats was in the Channel when the ‘scallop war’ broke out.

One was in dock, another was at a festival in Norway and a third was 8,000 miles away, the Mail can reveal. A fourth warship that came into service earlier this year had been sent back to base plagued by faults.

Fishermen involved in the battle off the coast of Normandy said the lack of support was shocking. Ashley Wilkes, 27, who was on board the Joanna C, said: ‘So the Royal Navy was absolutely nowhere near us – that’s just great, isn’t it?

‘Some protection would have been a help, and that’s what they are supposed to be there for. We were scared for our lives. It was absolutely dreadful.

‘They were chucking rocks, shooting flares and trying to ram us into the path of an oil tanker. In the darkness it was completely terrifying. It’s lucky no one was killed.’

Tuesday morning’s clash saw vessels ramming each other after a 40-strong flotilla sailed from three Normandy ports to intercept British boats. Rocks, shackles and burning hot flares were hurled as the two sides fought over the lucrative scallop fishing grounds in the Bay of the Seine.

The British trawlermen were legally entitled to fish there but their French counterparts are restricted by their own government until October 1, to enable scallop stocks to replenish. The French claim the British were ‘looting’ the bay.

The Royal Navy force, whose mission is to ‘Protect the British fishing industry’, was nowhere to be seen.

HMS Tyne, manned by 20 troops, was chained up in dock 800 miles away in Scotland at the Clyde naval base.

HMS Mersey was 1,100 miles away attending a festival in the port of Stavanger.

On the day of the Channel clash, the ship’s crew tweeted it was ‘great to be in Norway’.

Armed with a 20mm cannon and two machine guns, HMS Mersey was there to ‘fly the flag’ for Britain at an energy conference. The festival is billed as ‘three nights of wonderful culinary experiences, music and entertainment’.

It is not known whether any British sailors went ashore to enjoy the fun. The British ambassador to Norway and his staff, attending the conference, were given a tour of the warship.

The squadron’s third gunboat, HMS Clyde, is on deployment to the Falklands, 8,000 miles away.

A fourth gunboat, HMS Forth, was delivered for service earlier this year to replace HMS Tyne.

The latter was reprieved when naval chiefs discovered ‘more than 100 defects’ in HMS Forth, the UK Defence Journal reported in June. 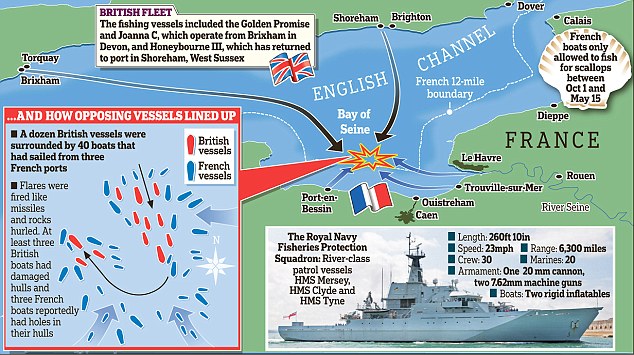 Derek Meredith, 50, owner of two boats from Brixham, Devon, damaged by the French, said: ‘It’s terrible to think the Navy were all elsewhere and so far away. Many of the lads think they should be there to protect them.’

A petition started in Brixham had been signed by more than 1,000 people calling for ‘naval protection against the French’ and warning: ‘Fishermen’s lives and livelihoods are in danger.’

Admiral Lord West, a former First Sea Lord, says the decline of the Fisheries Protection Squadron – once commanded by Horatio Nelson – is a disgrace. He said: ‘I have long been concerned that there are not enough ships available and as well as getting new ships we need to keep the ones we have got. Otherwise they simply cannot cover the area sufficiently.’

But he cautioned against sending the Navy to tackle French fishermen, saying: ‘We are not at war with France.’ 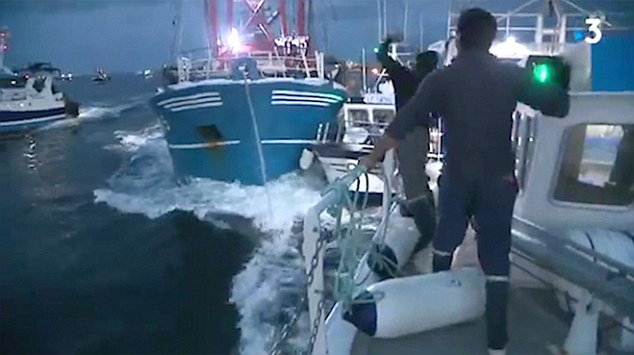 Whitehall sources said it was unrealistic to expect the Navy to intervene because the area is the responsibility of the French authorities. The Ministry of Defence made no comment.

Trawler captain Andrew Mcleod, 49, of Brixham, said the incident would not deter him, adding: ‘I’d like to see the Government take a firmer stance.’

But Normandy fishing chief Dimitri Rogoff vowed: ‘We will go out to see the English again soon. We do not want to prevent them from working, it is not a war, but they have to move away from territorial waters.’