The entire board of Britain’s largest Muslim charity are to resign today after anti-semitic posts by one of its directors – who had been brought in to replace a disgraced trustee – were uncovered.

Islamic Relief Worldwide (IRW), based in Birmingham, acknowledged last night that the Facebook posts were ‘inappropriate and unacceptable’, and its board of trustees would stand down and not seek election to a new board today.

The charity had already been rocked by scandal after director Heshmat Khalifa was found to have called Israelis the ‘grandchildren of monkeys and pigs’ and Egypt’s president a ‘pimp son of the Jews’.

When Mr Khalifa’s Facebook posts were revealed by The Times in July, IRW said it was ‘appalled by the hateful comments’, and confirmed he had resigned.

The international aid agency also pledged that it was ‘reviewing our processes for screening trustees’ and senior executives’ social media posts to ensure that this will not happen again’.

His board seat was taken by another IRW trustee and director, Almoutaz Tayara, who is also the chairman of Islamic Relief Germany.

But it has now been revealed that Dr Tayara, in posts on his own Facebook account, called leaders of militant Palestinian group Hamas as ‘great men’ who responded to the ‘divine and holy call of the Muslim Brotherhood’.

In another, he posted an image of former President Barack Obama wearing a tie branded with the Star of David, with Ayatollah Ali Khamenei and President Assad of Syria on his lap with quote marks saying ‘Death to America!’ and ‘Death… death’. 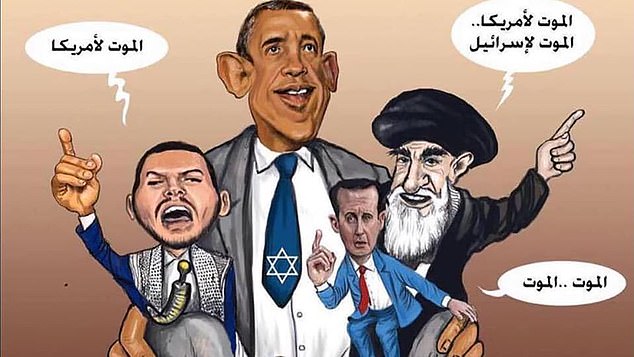 Tayara posted an image of former President Barack Obama wearing a tie branded with the Star of David, with Ayatollah Ali Khamenei and President Assad of Syria on his lap with quote marks saying ‘Death to America!’ and ‘Death… death’

His posts were written in 2014 and 2015, when President Obama was supporting Syrian rebels in the country’s civil war.

They were initially discovered by a German researcher, Sigrid Herrmann-Marschall, who published them in a 2017 blog post.

Islamic Relief Germany admitted that it had known of Dr Tayara’s posts since 2017 but allowed him to continue as its chairman after he apologised, deleted the posts and closed his Facebook account.

It is believed Islamic Relief Worldwide did not know of the post until they were approached by The Times earlier this week.

The charity said yesterday that Dr Tayara’s posts also contravened its values. He would step down and “play no further part in the governance of IRW”. It is understood that IRW did not know of the posts until it was contacted this week by The Times.

IRW works to relieve poverty and hunger in more than 40 countries.