The young entrepreneur behind popular wearable blanket ‘The Oodie’ has revealed how he failed six other businesses before coming up with his multi-million dollar idea.

Davie Fogarty, 26, is on track to make $200million this year after launching the hoodie-meets-blanket in 2018.

But before stumbling upon overnight success, the Adelaide entrepreneur tried his luck in a series of fruitless ventures – flogging everything from headphones and cookies to Vietnamese rolls.

‘I was baking cookies and going next door to my school and trying to sell them to the teachers, I was selling pencils at one stage and that flowed to trying to sell on eBay,’ Mr Fogarty told 9News of his young business attempts.

‘I had a couple of businesses in school and then after I left I tried all sorts of things from headphones to iPhone cases. I launched a Vietnamese roll shop which failed.

Mr Fogarty’s first brush with success came with the 2018 launch of his Calming Blanket franchise, which is touted as a tool to ease anxiety.

He then developed the idea to create a wearable blanket, using prolific social media marketing to give the Oodie traction.

The Oodie, which comes in an array of colours and prints, features a Sherpa fleece interior, a flannel exterior, a hood and pockets.

They sell for $109, which is discounted if several are purchased in a bundle.

The Oodie (pictured) is a wearable blanket, which features a Sherpa fleece interior and flannel exterior

The cosy garment has quickly become a winter-must have, accruing more than 149,000 followers online.

Mr Forgarty described the success as ‘pretty instant’, which he attributed to a combination of having a popular product, the right timing, and good digital marketing.

Although his business journey started off rocky, Mr Fogarty credits his hardship with providing the tools needed to kick start his multi-million group of brands.

‘In all I failed about six businesses and that pushed me to this journey of learning new skills, of learning digital marketing and giving me the tools for better businesses,’ he said. 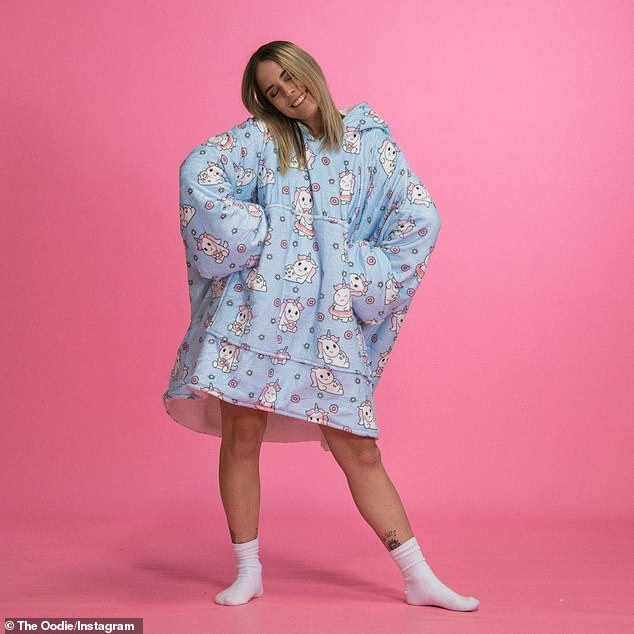 The wearable blanket, which comes in an array of patterns, has rapidly attracted tens of thousands of followers online