The Government department responsible for the environment has just two electric cars in its fleet of 4,000 – mainly diesel – vehicles.

Despite urging councils to crack down on diesel drivers, 98 per cent of Michael Gove’s department Department for Environment Food and Rural Affairs are diesel.

Following a parliamentary question from a senior MP, Defra also admitted having only nine ultra low emission vehicles – or plug in hybrids – to ferry officials around.

The huge fleet of cars is predominantly used by government backed bodies including the Environment Agency, Natural England, and the Forestry Commission, all of which are overseen by DEFRA. In total the Defra group, including these arms length government bodies, has around 22,000 staff.

The Department for Environment Food and Rural Affairs has just two electrics cars in its fleet of 4,000 (stock photo)

Defra has pledged to ensure its car fleet it entirely petrol hybrid or pure electric by 2025 and says it will not buy any more diesel cars.

This summer the government announced Britain is to ban all new petrol and diesel cars and vans from 2040.

At the time environment secretary Mr Gove warned that Britain ‘can’t carry on’ with diesel and petrol cars because of the damage they are doing to people’s health and to the planet.

‘There is no alternative to embracing new technology’, he said.

Labour MP Mary Creagh, who chairs the Environmental Audit Committee, lat night said: ‘The Government wants people to switch to electric cars, so it should be leading from the front. These figures show just how far it has to go.’

While James Thornton, chief executive of campaign group ClientEarth, said: ‘There are illegal levels of air pollution across the country and the government has a legal and moral duty to tackle it. Cleaning up its fleet of vehicles is an ideal opportunity to lead by example but on this evidence it looks like ministers are once again stuck in the slow lane.’

Other departments are also proving to be slow on the uptake including the Department for Business, Energy and Industrial Strategy which has no eco cars. 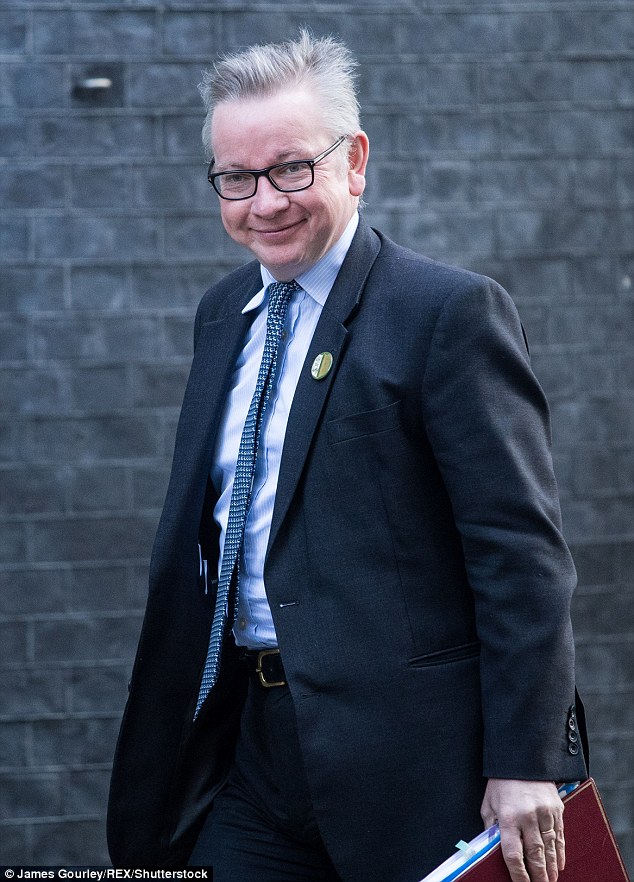 The numbers were released by the Government in response to a Freedom of Information request submitted by motoring magazine Car Dealer.

Car Dealer founder James Baggott said: ‘When the Government has waged a war on diesel car buyers, quite incorrectly so, it’s staggering to learn that 58% of the fleet used by ministers – including the Chancellor, who has been leading the battle – are still diesel-powered.

‘Perhaps the Government’s fleet buyers know what we all do, that diesel is often the right choice for a lot of buyers.

‘These mixed messages are damaging the car industry. Educating car buyers about choosing the right fuel for them must be at the forefront of ministers’ minds instead.’

Former Top Gear presenter Quentin Willson said: ‘When 49 out of the 84 cars used to chauffeur ministers are still diesel-powered, the Government isn’t exactly practising what it preaches.

‘You can’t pontificate on diesel car pollution and then be driven home in one. Why, out of those 84 cars, are only six electric?’

Prime Minister Theresa May told the Commons in January last year that the Government Car Service is ‘working to remove diesel vehicles from its fleet’.

A Government spokesman said: ‘These vehicles are being replaced as they become due for renewal with fit-for-purpose non-diesel alternatives that take into consideration operational requirements.’