Environmentally minded owners are switching to insect diets for their pets

Pet owners concerned about the environment are switching to meals made from crickets, mealworms and black soldier flies, according to reports.

The move is designed to reduce the overall environmental impact household pets have on the planet, as insect farms have a lower carbon footprint than livestock.

Pets are able to thrive on a diet of insects, as they are rich in protein, according to a report in the Guardian, that says they are also high in fats, oils and minerals.

It’s estimated that by 2030 the insect-pet-food market will increase 50-fold over current levels, producing more than half a million tonnes per year.

Experts recommend owners transitioning to an insect diet do so slowly, as pets can be sensitive to sudden diet changes.

The move is designed to reduce the overall environmental impact household pets have on the planet, as insect farms have a lower carbon footprint than livestock. Stock image

INSECT PROTEIN TO ‘COME OF AGE’ IN THE NEXT DECADE

According to RaboResearch, demand for insect protein as animal feed and a pet food ingredient, will reach half a million tonnes by 2030.

Current limited production capacity, high costs of production and in turn high prices, are among reasons why it isn’t expected to grow by even more.

The biggest opportunity for insect protein comes from a desire among many to be more sustainable.

‘Reflecting these opportunities and constraints, we believe the strongest future demand for insect protein lies in the aquafeed market,’ according to analyst Beyhan de Jong.

Research has suggested that if insects are farmed commercially, emissions and water use are lower per square ft than the land use required for livestock.

Nicole Paley from the Pet Food Manufacturers Association told the Guardian that when it is made into a nutritionally complete pet food, insect proteins can be used to contribute to a sustainable and nutritious diet.

‘Insect-based products offer an alternative for owners who prefer to feed their pets a diet that is sourced from ingredients other than traditional livestock animals.’

Andrew Knight, an expert in veterinary science from the University of Winchester, agreed, and told the Guardian it reflects a wider, more sustainable shift in society.

He said it was partly due to owners anxieties about the carbon footprint of the pet food industry, and the meat industry as a whole.

Studies have shown that about a quarter of the environmental harm linked to the meat industry is linked to the production of pet food.

This is equivalent to about 64 million tonnes of carbon dioxide being emitted to the environment each year, a UCLA study found.

One barrier to the shift to an insect diet for our pets could be the cost, with insect-based pet food generally more expensive than meat-based products.

However, the price of these products is expected to come down with increasing demand, experts predict.

Lovefood produces an insect-based dry kibble that costs about £12 per kg, which is more than twice the per kg price of a chicken alternative.

Futerra announced earlier this year it was working with Mars Petcare on an insect pet-food range for cats called Lovebug.

Their market research found that half of pet owners would consider an insect diet as a direct result of a desire to be more sustainable.

Solitaire Townsend, Futerra co-founder told the Guardian: ‘Cats aren’t squeamish about eating bugs, but some people can be.

‘Of course, millions of people across the world eat insects as normal within their diet. 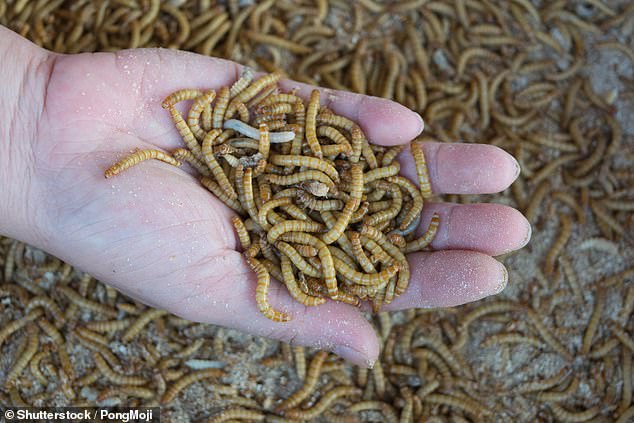 Pets are able to thrive on a diet of insects, as they are rich in protein, according to a report in the Guardian , that says they are also high in fats, oils and minerals. Mealworms pictured

‘Perhaps in the UK it can feel a bit unusual, but I’m old enough to remember when sushi, and even pasta, was the same way.’

The Pet Food Manufacturers Association say there are seven insects authorised for use as pet food ingredients in the EU, each of which are fed on spent grains, palm kernel, fruit and vegetable crop by-products.

‘At the moment, there is not enough evidence to support insect-based protein completely replacing current complete pet food diets, but it is another option which could be considered in the future,’ Justine Shotton, president of the British Veterinary Association told the Guardian.

‘Owners should always ensure any changes to a pet’s diet are supervised by a vet with in-depth nutritional knowledge.’

THE FUTURE OF FOOD: INSECT BURGERS AND LAB GROWN MEAT

Speaking in May 2021, a group of leading experts predicted lab-grown meat would knock plant burgers off the shelves as the vegetarian food of choice by 2030.

‘Food is going to change more in the next 10 years than it has in 10,000 years, due to new innovations in food technologies and biotechnologies,’ said Ryan Bethencourt, CEO at dog food company Wild Earth.

Lab-grown meat is set to become more ubiquitous in the next 10 years, transforming from a niche concept to a common fridge staple.

‘Novel technologies such as the ones developed in cellular agriculture are part of the solution, next to reducing food waste and changing consumer behaviour,’ said Professor Mark Post at Maastricht University in the Netherlands.

Insects are also expected to play a major part in the future of food. In 2020, Henry Dimbleby, co-founder of Leon restaurants, said edible insects could form part of the country’s first national food strategy for 75 years.

Crickets, worms and ants are environmentally friendly, because they take up fewer natural resources than rearing livestock, and are also a healthy alternative to meat.

They’ve already been touted as the next ‘superfood’ because they’re packed full of protein, nutrients, potassium, magnesium and three times more fatty acids than omega-3 in salmon.

Europe gave permission for mealworms, which are beetle larvae, to be used in food stuff earlier this year, and farmers are looking to cultivate bugs for food.

A UK farm is serving up juicy snacks made entirely from creepy-crawlies – and claims they’re even tastier than beef.

Michael Wight, FSA Head of Food Safety Policy, told MailOnline that he recognises the potential of alternative proteins contribution to sustainability goals, but safety is paramount.

‘Our priority is to protect consumer interests and ensure food is safe and what it says it is through a process that enables new products to come to market.’

No British firms have been authorised to sell cultured meat products to the market, and Mr Wight said none have applied for regulatory approval.

‘The FSA is willing to discuss potential applications with the industry to support them through the process,’ he added.

It could be covered under existing food safety, and novel food legislation, with permission to market alternative products likely to take 18 months from first application, the FSA told MailOnline.