White House officials are fuming over Environmental Protection Administration Scott Pruitt’s sweetheart apartment deal with the wife of an environmental lobbyist who charged him just $50 a night to stay at her high-end rental last year.

Pruitt’s unusual living arrangement allowed him to pay a total of just $6,100 to use a bedroom in the condo for six months – in a prime Capitol Hill location where studio rentals range from $1,350 to $1,975 a month, according to Bloomberg News. 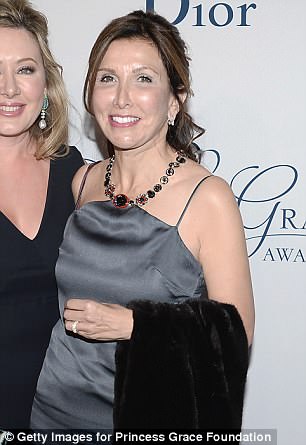 Scott Pruitt’s unusual living arrangement allowed him to pay a total of just $6,100 to use a bedroom in the condo belonging to Vicki Hart (right)  for six months – in a prime Capitol Hill location

The condo is owned by Vicki Hart, a health care lobbyist, whose husband J. Stephen Hart lobbies for companies regulated by the EPA.

The news was first revealed this week on Thursday by ABC News, which obtained documents that showed Pruitt made sporadic payments to Hart between March and September of 2017. He also appeared to have a deal where he would only pay for the nights he stayed in the apartment.

The deal has been characterized as an Airbnb-type arrangement. One-night bedroom rentals in the area can go for as low as $45 a night, reported Bloomberg News.

Now White House officials are ‘growing dismayed’ by Pruitt’s rental decision, and his dawdling response when he was first asked to provide records related to the lease, according to Bloomberg News.

Instead of Pruitt turning over the documents himself, the EPA had to obtain the records from Pruitt’s landlord Hart, according to reports.

It was further reported on Friday that Pruitt’s college-aged daughter had a similar arrangement with Hart, and used another bedroom in the condo while interning at the White House last year.

The apartment deal with a lobbyist raises ethical questions, according to watchdog groups, who have called on the EPA inspector general to investigate.

‘This appears to be a gift from a lobbyist to the EPA administrator,’ Craig Holman, government affairs lobbyist for Public Citizen, said in a press statement. ‘Scott Pruitt seems to be renting at well below market value – from a family member of a lobbyist who has business before the EPA.’ 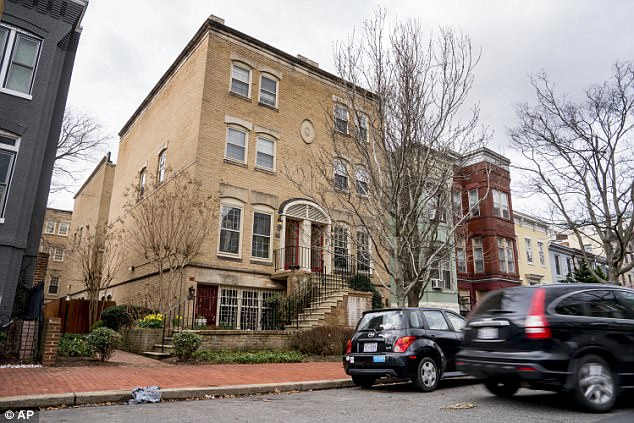 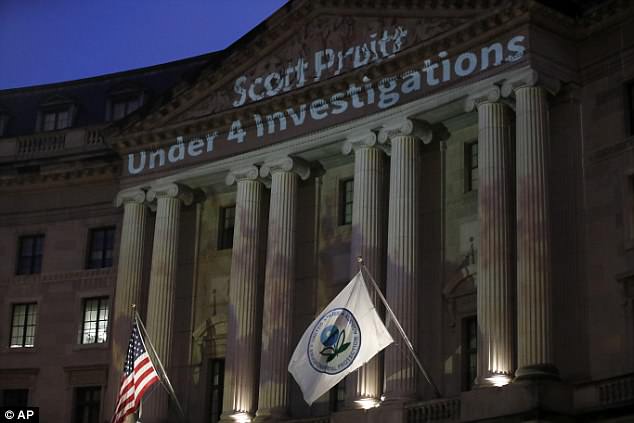 Light is projected by the League of Conservation Voters as part of the new Boot Pruitt campaign onto the Ronald Reagan Building and International Trade Center, the location of the Environmental Protection Agency, Wednesday, March 28, 2018, in Washington. The images describe EPA Administrator Scott Pruitt’s wasteful spending on luxury travel, ongoing investigations while in office, and dangerous policies that have imperiled public health

The EPA was reportedly caught blindsided by the apartment deal – Bloomberg News reported that Pruitt did not inform the department in advance.

But the EPA ethics counsel has defended Pruitt’s living arrangement, arguing that records show he paid rent on the property which negates the fact that it was owned by lobbyists.

‘He paid a fair price for what amounts to just a room,’ EPA ethics counsel Justina Fugh told Bloomberg News. ‘So I don’t even think that the fact that the house is owned by a person whose job is to be a lobbyist causes us concern.’

This is not the first time Pruitt has gotten into hot water over financial decisions.

The EPA chief has charged the federal government for $163,000 in first-class, military and charter flights for himself during his first year in the administration, Politico reported last week. Over $100,000 of that was spent on first-class flights alone.

The EPA also defended the flights, saying Pruitt’s decision to fly first class was made for security reasons.

However, the uproar over the pricy air travel led Pruitt to tell CBS News in February that he would start flying coach instead.