Former Newsnight producer Sam McAlister, who fixed up Prince Andrew’s self-immolating TV interview, fantasises on Twitter about being played by Hollywood beauty Cameron Diaz in a movie about the royal disaster.

Another BBC hand brags about an unseen ‘jaw-dropping’ photo of Andrew that might cause another scandal.

Isn’t such low hustling from current and ex-BBC employees becoming as distasteful as the Andrew affair itself?

Typecast as a cad, actor Nigel Havers, pictured, once claimed he received underwear in the post from randy housewives. Asked by a female audience member after a speech at The Delaunay, a Covent Garden restaurant, what he did with the garments, he said: ‘I wear them of course.’ Incidentally his former agent – Michael Whitehall, father of comedian Jack – recalled this week Havers was best man at his marriage, adding bitchily: ‘He was a big star when I looked after him.’ 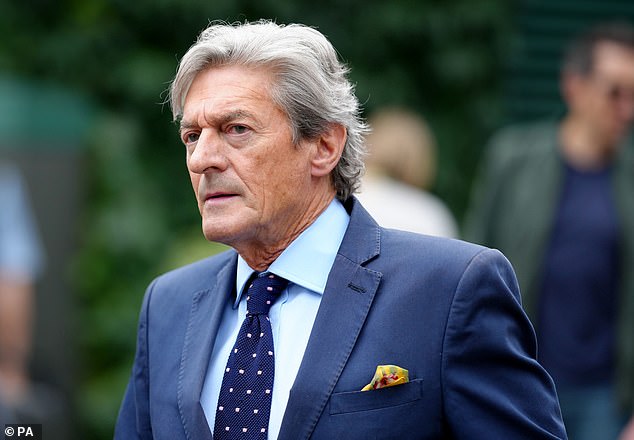 Tom Bower, in his latest blockbuster about Harry and Meghan, says the Princess Royal’s son Peter Phillips was placed between Princes William and Harry behind Prince Philip’s coffin to prevent ‘any problems’ surfacing between them. My royal source says: ‘Philip’s funeral plan envisaged that three of his four grandsons (the fourth, Viscount Severn, considered too young at 14) walking in a row behind his coffin, Peter Phillips taking the central position reflecting his status as the eldest grandchild.’ Tom’s books are often improved in re-writes by newspapers which serialise them. Evidently not in the case of the latest by The Times.

Last year Labour’s deputy leader Angela Rayner said their MPs should not have second jobs and the party would ban them ‘with only limited exemptions for public service’. This week she was standing in for LBC presenter James ‘Suits You Sir’ O’Brien. Not usually regarded as a public service position.

Labour MP Chris Bryant ‘warmly congratulates’ new deputy leader of the house Peter Bone, adding cheekily: ‘I confess that I hardly recognise him with his clothes on – we often change next to each other in the gym.’ Bone would have no difficulty recognising Bryant in his smalls. The latter once posed in them on a dating website. Happily he has lived down his nickname, Captain Underpants.

Comedian Jimmy Carr says he’s become a cancellation therapist to performers. ‘When anyone gets cancelled I get hold of their number, give them a call and try and talk them through it.’ An occasional victim of the woke police himself, he’s happy to be back on the road after lockdown. ‘I never thought I’d be so excited to be in a petrol station at 2am but there you go.’

After Radio 4 Today’s latest segment on listeners’ favourite beaches – on Monday it was Norfolk’s Stiffkey – presenter Justin Webb remarks on air: ‘Eventually we’ll have the top three, which you can then go to and ruin.’ Co-host Katya Adler giggles nervously at this haughty dismissal of their sea-bathing listeners.