Until June, every state in Australia was able to have 28 days of no community transmission through lockdowns and contact tracing.

So far, 79 people have died in NSW since the Delta outbreak began in June, with an unvaccinated women in her sixties the latest victim in south-west Sydney.

The virus has also spread to the regions, with eight council areas in Newcastle, the Hunter Valley and Port Stephens on Thursday plunged into a one-week lockdown.

‘They’ll be the first part of Australia that will, quote unquote, learn to live with the virus but it’s going to be quite messy in New South Wales for the next couple of months.’

Premier Gladys Berejiklian conceded trying to achieve zero Covid was difficult until 70 per cent of people were vaccinated.

‘That has to be our aspiration,’ she said on Friday.

‘It’s a challenge for us to live with Covid without this high vaccination rate.

‘We do have the harsh lockdown. We’ve never dealt with Delta, you can’t compare it to other lockdowns.’

‘In Sydney and New South Wales, it looks unlikely that we’re going to get back to zero transmission any time soon and probably never,’ he said.

‘We will actually rather bridge over to when the vaccine coverage is high enough to get some control in September, October, maybe even November and keep the numbers low.’

The University of Melbourne and the Burnet Institute have also done modelling showing achieving zero cases in NSW was close to impossible, with vaccines the key approach to a phased reopening of society. 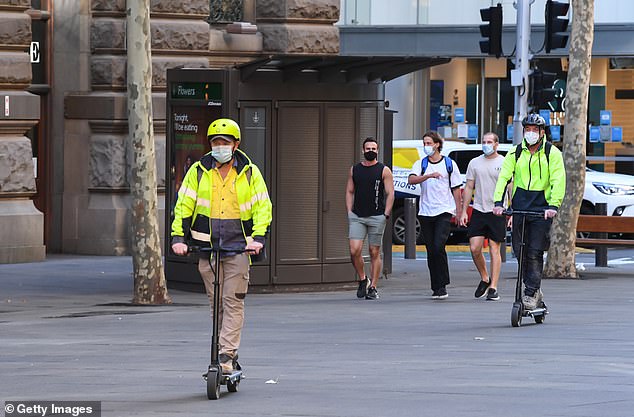 The University of Melbourne and the Burnet Institute have also done modelling showing achieving zero cases in NSW (pictured are construction workers in Sydney’s city centre) was close to impossible, with vaccines the key approach to a phased reopening of society

Professor Tony Blakely on June 24 called for a Sydney lockdown, adding gyms should be closed.

The lockdown has twice been extended, with August 28 the next nominal end date that looks likely to be extended again with Ms Berejiklian using the phrase ‘close to zero’ instead of zero at media conferences.

Professor Blakely said snap lockdowns were still the answer, with Melbourne on Thursday put into a one-week lockdown – the sixth since the start of the pandemic in early 2020.

‘It’s going to be a rough couple of months,’ he told the Today show on Friday.

‘What’s going to happen is places like Melbourne, when it pops up, we’re just going to have to slam into these rapid lockdowns.

‘It’s going to happen a couple more times until we get to October, November.’ 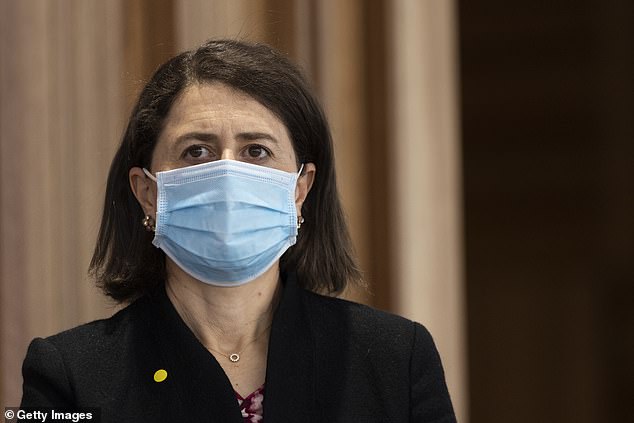 Ms Berejiklian wants NSW to have an 80 per cent vaccination rate before life gets back to normal and on Friday said daily case numbers were likely to keep increasing.

‘We’re likely to see this trend continue for the next few days,’ she said.

‘We want people to prepare for higher case numbers.’

In Sydney’s south-west, the epicentre of the Delta outbreak, just 14.6 per cent of people aged 16 and over have had two doses of either the AstraZeneca or Pfizer vaccine.

The Hunter Valley outside Newcastle had an even lower rate of 14.1 per cent.

By comparison, 26.9 per cent of people on Sydney’s affluent North Shore had received two doses.