Epstein’s death was posted online before it was officially announced

Jeffrey Epstein’s death was reported anonymously on an internet message board 40 minutes before it was officially announced.

The New York City Fire Department apprentice examined whether a responder called to the scene had posted about the pedophile’s death on the 4Chan message board prior to officials announcing it to the public, BuzzFeed News reported.

An FDNY spokesman had claimed that officials ‘determined this alleged information did not come from the Fire Department’. A spokesman declined to provide further detail on the matter to the news outlet.

‘[D]on’t ask me how I know, but Epstein died an hour ago from hanging, cardiac arrest. Screencap this,’ read the post, which was published at 8.16 am.

The picture contained an image of Pepe, the green frog that has become commonly used by right ring trolls online.

The information was on the internet around 38 minutes before the first Tweet announcing Epstein’s death on Saturday was posted by an ABC News reporter at 8.34 am.

Other 4chan users then asked the anonymous author for more information.

The original poster added more information to the discussion thread, including a detailed breakdown of the procedures allegedly used to resuscitate Epstein, when he was asked for more information.

It was thought that the poster may be a first responder given the intricate level of medical information that was given about Epstein.

Frank Dwyer, an FDNY spokesman, told BuzzFeed News he ‘could not verify the accuracy’ of information in the 4chan post. 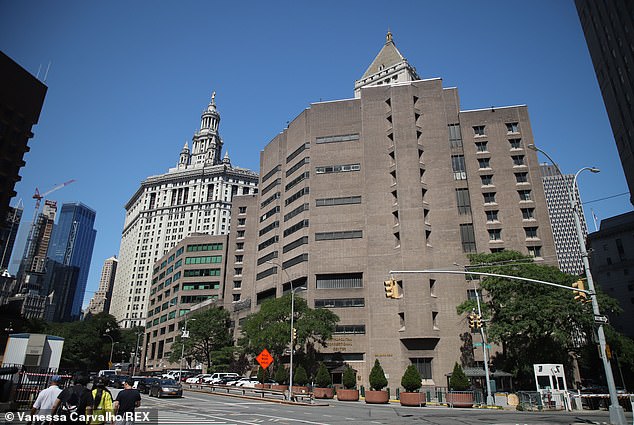 Epstein was being held without bail at Manhattan’s Metropolitan Correctional Center on charges of conspiracy and sex trafficking. One of the guards was working his fifth straight day of overtime at the short staffed jailhouse, a source has said 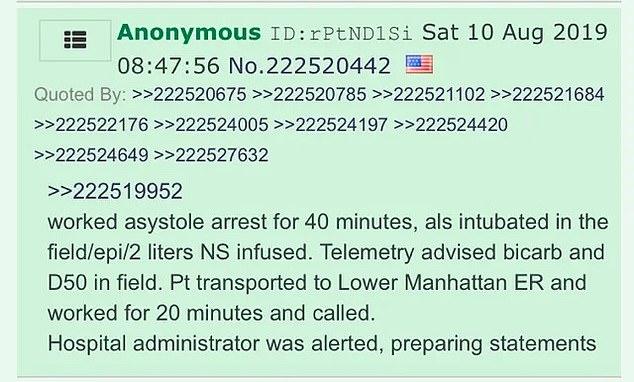 He claimed that any medical professional who divulged patient information without consent is in violation of a federal health privacy law, HIPAA, and that FDNY would look into it.

‘The department will review this incident,’  he said at the time.

The FDNY later said that ‘it is reviewing this incident, there is no investigation.’

The circumstances of Epstein’s death will not be revealed until the final coroner’s report is released, meaning the 4chan post detailing the alleged treatment he received can not be verified.

It was reported that prison guards shouted ‘breathe, Epstein, breathe’ as they tried to revive the billionaire pedophile after he was found hanging in his jail cell, and members of Congress are demanding answers regarding his apparent suicide. 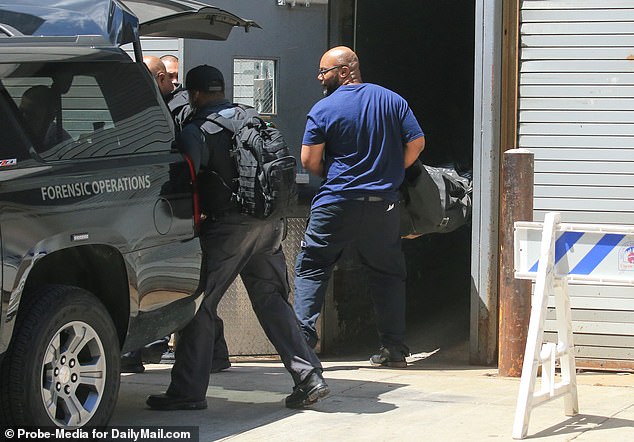 Epstein was awaiting trial on sex trafficking charges when he was found dead on Saturday having apparently hanged himself in his cell at the Metropolitan Correctional Center in Manhattan.

The sex offender had previously been on suicide watch but that was lifted some time prior to his death.

In the days since Epstein’s death, a portrait has begun to emerge of Manhattan’s federal detention center as a chronically understaffed facility that possibly made a series of missteps in handling its most high-profile inmate.