Equity release rates hit their lowest ever levels – but is it really as cheap as it seems?

Equity release rates have plummeted to their lowest ever levels as demand for later life finance grows, research has revealed.

But homeowners who are recommended a lifetime mortgage, where interest rolls up into the loan, could actually save tens of thousands of pounds by refusing equity release and taking a retirement interest-only mortgage.

Last year This is Money revealed that advisers may be more inclined to recommend that borrowers take a lifetime mortgage over a normal mortgage – partly because there is no risk that borrowers could lose their home but also because they earn 10 times the commission.

Now analysis by Defaqto has found that the average equity release rate now stands at 4.55 per cent, compared to an average of 5.4 per cent just 18 months ago.

The lowest rate on the market is now just 2.84 per cent – on offer from More to Life – making it cheaper than ever to borrow against your home after you retire.

But the same research also uncovered evidence that borrowers who took a retirement interest-only mortgage would be charged thousands of pounds less in interest over the term of the deal – due to the fact that interest is paid monthly rather than building up and compounding your debt.

If the home was worth £250,000 to start with and house prices over that period had increased on average by 2.5 per cent per year, the debt would represent 22 per cent of the equity in the property, leaving the owner with 78 per cent of the house value.

However if that same borrower instead took a slightly more expensive retirement interest-only loan of the same size and term length at a typical 3.19 per cent,  they would actually end up paying £8,230 less over the course of the loan than if they’d used equity release, despite paying a higher interest rate.

This is because they would be paying the interest off each month – around £133 – thus not giving it the chance to compound.

If house prices over that period had increased on average by 2.5 per cent per year, the debt would represent 12.2 per cent of the equity in the property, leaving the owner with 87.8 per cent of the house value.

If you compared retirement interest-only rates with like-for-like equity release rates, then the difference would be even more dramatic.

And the longer the length of the loan, the more this difference is pronounced. 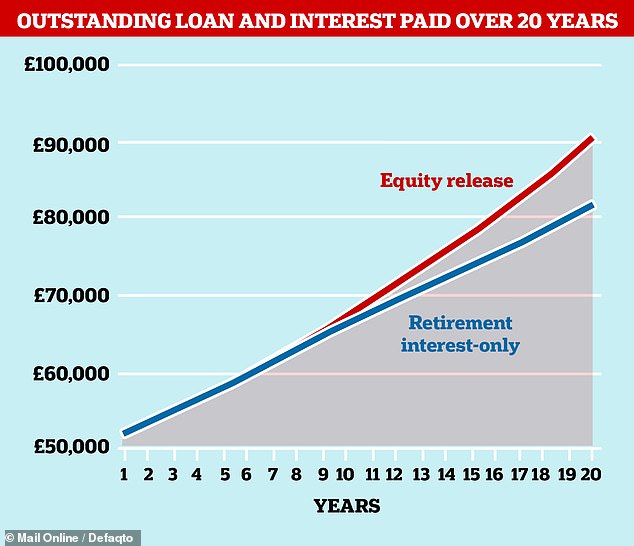 Defaqto’s Brian Brown said: ‘For those in later life who own their own home but need cash, borrowing money is not easy. Most standard loans and credit deals are not available to pensioners, leaving them with little choice but to release equity from their home.

‘Releasing equity from your home is a big decision with ramifications for the rest of your life; you should take advice from an independent and qualified professional before making any decisions.’

The research comes as an estimated £5billion of cash was released from peoples’ homes in 2019 as more and more older homeowners looked to help their children onto the property ladder, supplement pension income or plug an endowment shortfall.

Last year This is Money revealed that the take-up of retirement interest-only mortgages has struggled, with just 112 sold in the 12 months since they were first introduced in May 2018.

After further investigation, in November we revealed that as of July just 660 retirement interest-only deals had been sold.

Lifetime mortgages, the most popular type of equity release, still dominate the later life lending scene as a result.

The lowest lifetime mortgage rate available today is 2.84 per cent from More 2 Life, at age 65, according to Defaqto.

Retirement interest-only interest rates have also dropped to their lowest ever levels, with the lowest rate available today is 2.79 per cent from Marsden Building Society.

Like mortgages, equity release loans are offered up to set loan-to-values – the size of the loan as a percentage of your property’s value.

However, equity release is offered only up to a far lower loan-to-value than a traditional mortgage. This is because interest is not paid off on the loan and instead rolls up, meaning the amount to be repaid increases over time.

Equity release providers should guarantee that you will never have to repay more than the value of your property.

Is equity release as cheap as it seems?

While equity release rates are much lower than they have been historically, there are certain other factors to take into consideration.

The most important thing to remember is that the interest on the loan has ‘rolled up’, meaning it has been added to the original loan.

If the loan is taken over a long enough period of time, this can reach a point where the money owed starts growing exponentially.

Just because this money isn’t coming out of your pocket each month doesn’t mean you’re not spending it – it’s effectively coming out of the equity in your home.

You can read our comprehensive guide to equity release by clicking here.

To use the calculator, if you’re considering taking a lump sum, just use the ‘lump sum’ option, while ‘monthly saving’ can be used to calculate how much you would owe with a drawdown plan.