PHILADELPHIA (AP) – Eric Gordon hit a 3-pointer at the buzzer to lift the Houston Rockets to a 105-104 win over the Philadelphia 76ers on Wednesday night.

The Sixers were sloppy down the stretch and used a series of bad decisions and bad plays to cough up a lead that had stretched to 11. Joel Embiid was whistled for goaltending, and the Sixers had Jerryd Bayless take a shot with the game still on the line instead of Embiid or Ben Simmons.

While the Sixers collapsed, the Rockets pounced and scored the final nine points.

Gordon scored 29 points, James Harden had 27 and Clint Capela had 16 points and 20 rebounds.

J.J. Redick scored 22 points, Embiid had 21 and Robert Covington 20 for the Sixers.

The Sixers seemed in control until the final 2 minutes.

Embiid, the 7-foot center out of Cameroon, again had the Sixers playing like a playoff team and not pushovers when he’s healthy and energized. His 3 off the glass from the top of the arc in the fourth gave the Sixers a nine-point lead. Embiid pointed toward the sky as he ran back on defense and his bucket about blew the roof off an arena packed with fans who have had little reason to cheer the last five years.

Harden and Gordon hit 3s that stunned the Sixers and cut the gap to three, starting a rally that lasted down to the final bucket.

Both teams played without key cogs to their offense: Chris Paul was out again for the Rockets because of an injured left knee and Markelle Fultz, the No. 1 pick of the 2017 draft, missed the game with a sore right shoulder. Fultz will miss the next two games and will be evaluated next week.

The Sixers drew another big crowd – 20,682 – as fans have bought into “The Process,” and big plays had fans going wild. They were given souvenir signs that had a picture of Simmons, Embiid and Fultz, the trio expected to soon carry the Sixers into the playoffs.

Embiid, who sat out the second quarter, waved his arms and exhorted the crowd to get louder on a “Trust the Process” chant, and then hit a free throw for a 72-69 lead. He egged on the crowd on a “Ref, you suck” chant and soaked in the calls for “MVP! MVP!”

Simmons and Embiid have been a fantastic 1-2 punch and helped the Sixers win at Detroit on Monday night. Simmons, the No. 1 pick in the 2016 draft, struggled for most of Tuesday’s game until he connected on a rim-rattling dunk off the break that kept the Sixers’ lead at five.

Rockets: G Trevor Ariza will miss the three-game trip with a sprained left foot. He will be evaluated next week when the Rockets return home. … C Nene sat out with a sore left Achilles.

76ers: Team president Bryan Colangelo said there had been “no medical reason” not to play Fultz this season and the shoulder had no structural damage. … Fultz is shooting 33 percent, 50 percent from the free-throw line and has not attempted a 3-point shot all season, all as a reserve. 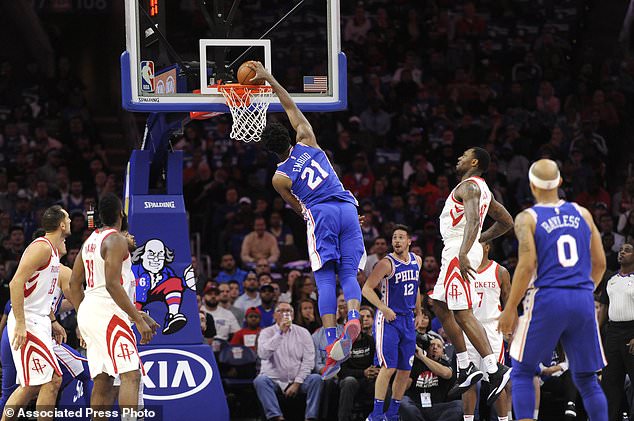 Philadelphia 76ers’ Joel Embiid (21) dunks the ball in the first half of an NBA basketball game against the Houston Rockets, Wednesday, Oct. 25, 2017, in Philadelphia. (AP Photo/Michael Perez) 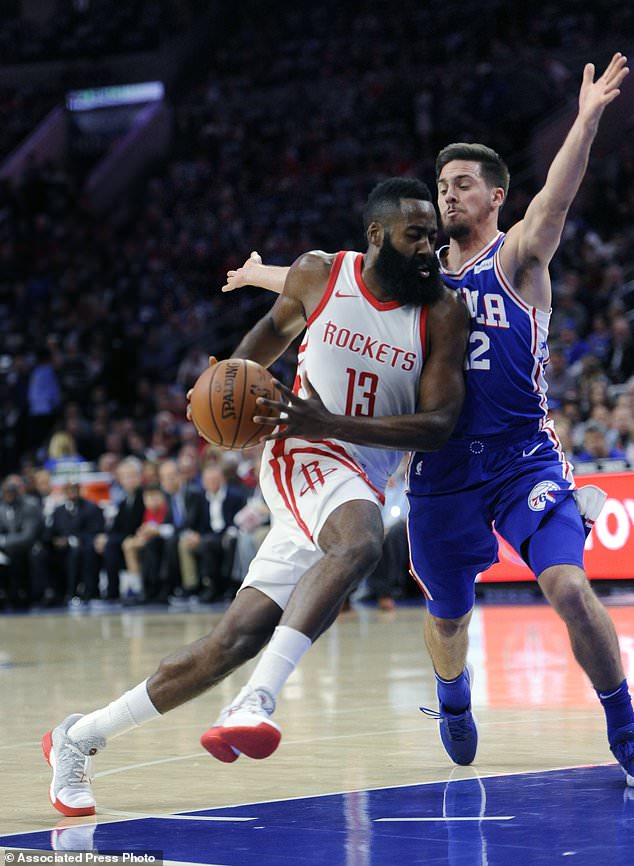 Houston Rockets’ James Harden (13) drives to the basket past Philadelphia 76ers’ T.J. McConnell in the first half of an NBA basketball game, Wednesday, Oct. 25, 2017, in Philadelphia. (AP Photo/Michael Perez) 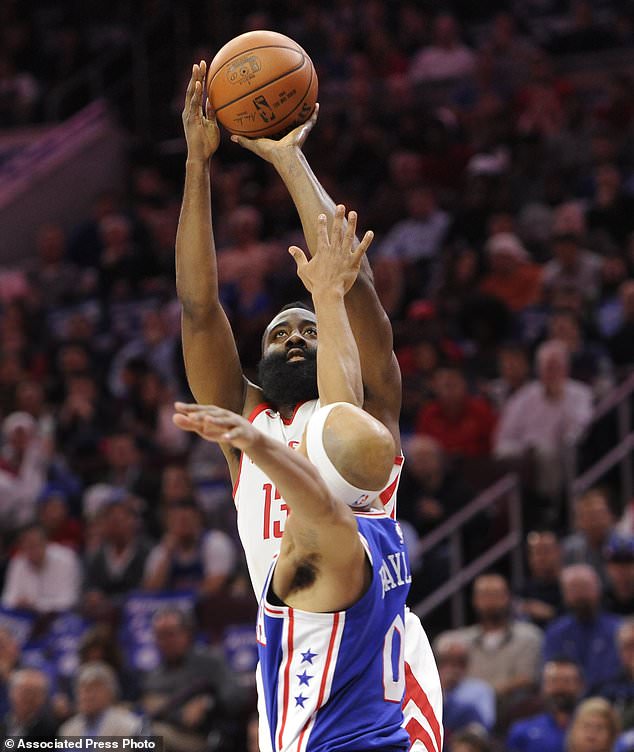