Erik ten Hag’s youngsters step up to the plate: 17-year-old Kobbie Mainoo puts on an assured display on his debut, Alejandro Garnacho torments the Charlton defence and Facundo Pellistri stars with a quickfire cameo in 3-0 win

Fast forward to today, and the highly-rated 17-year-old was given a standing ovation by the Old Trafford faithful after being handed his debut against the Addicks during Man United’s 3-0 Carabao Cup quarter-final win.

Mainoo put on an assured display on his first outing for the United first-team, showing composure in midfield and enjoying some nice spells in the final third.

Kobbie Mainoo, 17, was given his debut for Man United by manager Erik ten Hag against Charlton 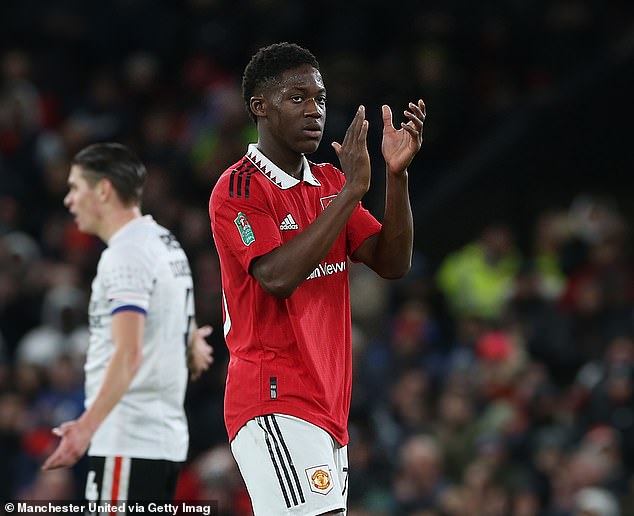 Before kick-off, the United boss had urged Mainoo to seize the opportunity because he had ‘deserved’ his call-up.

‘For him [Mainoo] it’s a great opportunity, he did very well during the winter camp in Spain. He also did very well against Everton in a friendly. He deserved to play, so I’m happy to give him the opportunity – it’s about deserving it,’ Ten Hag told MUTV.

With Bruno Fernandes suspended and Donny Van de Beek injured – as well as Ten Hag making a host of changes to his side before the Manchester derby this weekend – it allowed the likes of Mainoo to step-up.

Although the Stockport-born midfielder – who became the eighth United player to debut under Ten Hag – by no means looked out of place, he did not show his full potential on the evening.

His debut was eventually cut short when he was replaced at the hour-mark along with Fred and Antony as Ten Hag sent on reinforcements in Casemiro, Eriksen and Rashford. 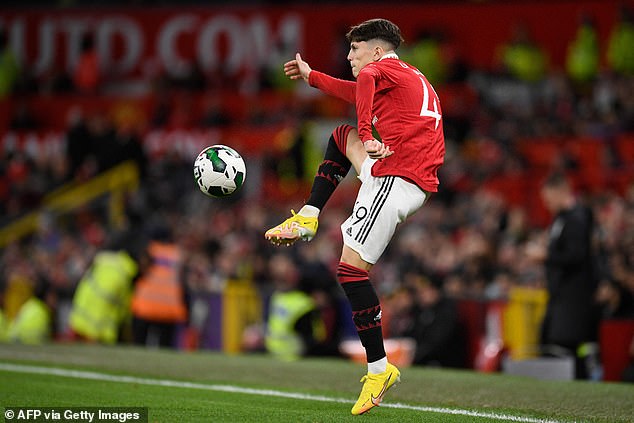 Alejandro Garnacho, 18, starred for United on the night and rang rings around the Charlton defence 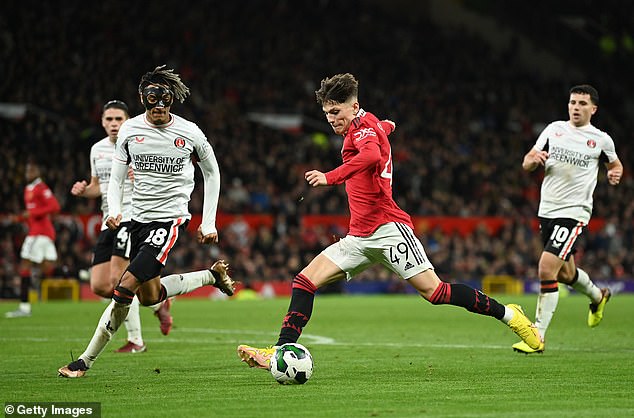 He has twice been an unused substitute in the Premier League this season but Ten Hag selected him for the recent warm weather training camp in Spain and Mainoo actually scored in the friendly with Cadiz.

He also did well in the second-half against Real Betis in the other friendly in Spain.

On the night, although Mainoo looked composed in midfield, it was 18-year-old Alejandro Garnacho who ran the show.

The United youngster caused Charlton all sorts of problems and ran rings around right-back Sean Clare.

He was unfortunate not to get on the scoresheet and had a late curling effort brilliantly kept out by Ashley Maynard-Brewer in the Charlton goal. 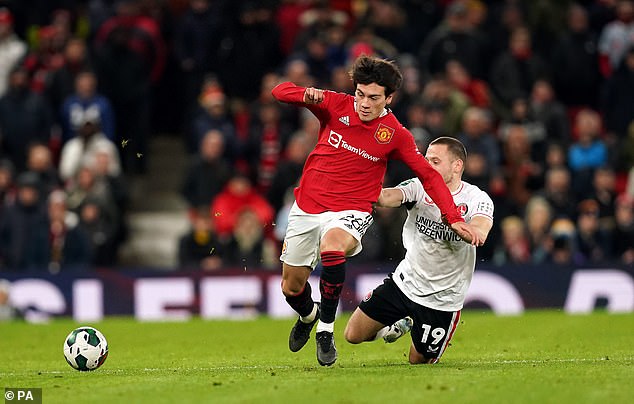 Ten Hag was eager to hand out debuts last night and another one who profited was 21-year-old Facundo Pellistri who finally got given his chance after Ole Gunnar Solskjaer signed the winger from Uruguayan side Penarol for £9m in 2020.

Despite only coming on in the 84th minute, he lit up the Old Trafford stage with a quickfire cameo.

First he went on a bursting run down the right before teeing up McTominay to have an effort on goal.

But having only been on the pitch a matter of minutes, he created United’s third goal with a wonderful run inside, using McTominy as a decoy on the overlap, before threading the ball through to Rashford to tuck home his second.

Promising signs, then, but Ten Hag knows his side are not there yet.