The teenager notched his seventh goals in just four Champions League games – two more than any other player has ever managed in the competition.

He is also one of just four players to have registered in each of his first four Champions League appearances, joining Alessandro Del Piero, Diego Costa and Ze Carlos in an elite club.

7 – Erling Haaland has scored seven goals in his first four Champions League appearances – two more than any other player in the competition’s history. Wunderkind. pic.twitter.com/thPucN0KNM

In total, Haaland has 23 goals in all competitions this season and is attracting the interest of Europe’s biggest clubs.

His club have slapped an £86million pricetag on the 19-year-old, but that may not deter the likes of Juventus and Manchester United making a January move.

In the match, Napoli required Hirving Lozano’s strike just before half-time to rescue a point in the Group E clash, having struck the woodwork twice. 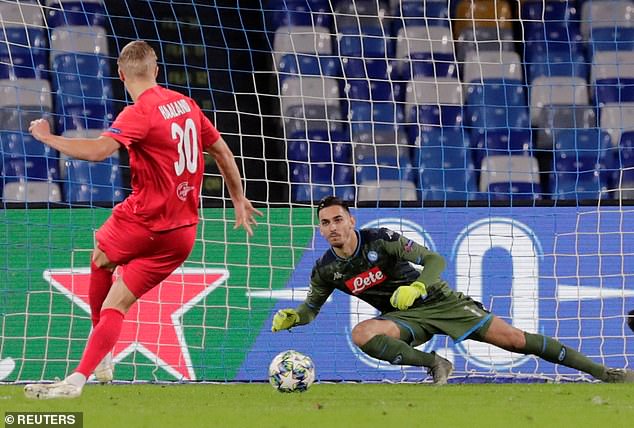 In total, Carlo Ancelotti’s side racked up 30 shots but just three hit the target and dropped to second in the table following Liverpool’s win over Genk.

Jose Callejon smacked a header against the post while Lorenzo Insigne missed two chances before hitting the woodwork with an opportunistic 30-yard lob.