Eruo2020: Scottish and English fans in huge brawl in Ibiza

This is the shocking moment a huge brawl erupted between English football fans and Scottish pub-goers following the Three Lions’ historic Euros win over Denmark.

Jubilant fans spilled on to the street where they ran into a crowd of Scots drinking at the Highlander Bar opposite, sparking tensions which ended in punches, chairs and bottles being thrown.

One video captures the moment the cameraman, in a heavy Scottish accent, yells: ‘Get into these English b*******, yes lads!’ 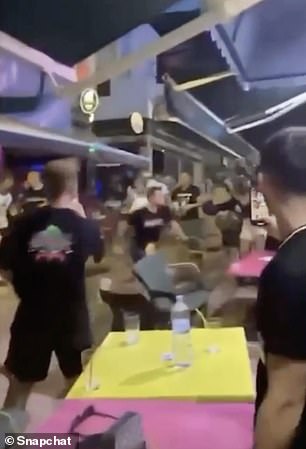 Two separate pieces of footage captured the ugly scenes, with one showing a large crowd of English fans in the street, facing off against a smaller group of Scots.

A woman in a bright orange dress can be seen arguing with another woman wearing pink, as drunken fans chant ‘It’s Coming Home’ in the background.

Men from both sides then walk over in an apparent attempt to diffuse the situation, before several shoves between the sides quickly leads to punches flying in.

Screams and sounds of smashing glass follow as both sides pile into one another, to shouts from one Scottish bystander of ‘f***ing yes lads!’

The warring factions momentarily separate before chairs start being thrown back and forth, with another round of punches following afterwards.

As the footage ends, the arguing sides have spread out up and down the narrow alleyway, with taunts still being exchanged back and forth.

It is unclear what exactly led to the argument that sparked the brawl, but one of the videos has a caption reading ‘been coming all night’ – suggesting that tensions had been simmering since long before the match ended.

England narrowly defeated Denmark in Wednesday night’s Euro 2020 semi-final to reach their first final ever, which will be played Sunday at Wembley against Italy. 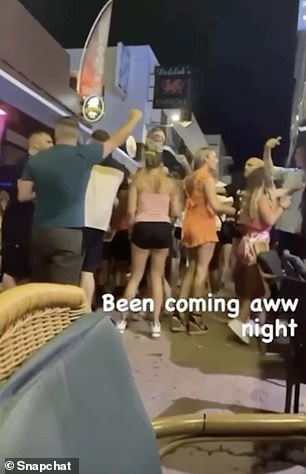 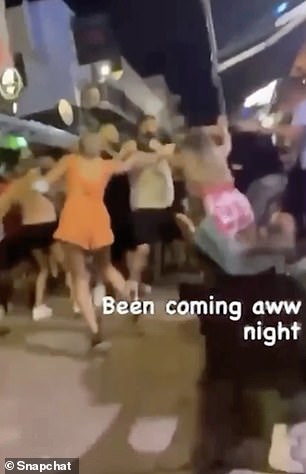 Punches, bottles and chairs all went flying as the rivals fought in the streets of San Antonio after England booked their spot in the country’s first Euro final ever

Denmark scored first through a Mikkel Damsgaard free kick before the scoreline was levelled up shortly afterwards via an own goal by captain Simon Kjaer.

A cagey second half saw England create the better of the chances but fail to get ahead, before relentless attacking play in the first half of extra time yielded a penalty after Sterling went down in the box.

Kane’s effort was saved by Kasper Schmiechel – Denmark’s man of the match – but rather than collect the ball he was only able to parry it back into the path of the English captain who buried it at the second time of asking.

England then kept the ball well during the second period of extra time, denying the Danes any route back into the match before the referee blew for full time

That sparked scenes of ecstasy up and down the nation as fans flooded city streets, climbed on top of buses, and chanted late into the night.

If Gareth Southgate’s men can find a way around Roberto Mancini’s much-fancied Italian side then it would mark the first time they have ever lifted the Euros trophy.

Scotland’s Euro tournament was a very different affair, the highlight of which was a 0-0 draw with England at Wembley three weeks ago.

They lost their other two group games – beaten 2-0 by the Czech Republic thanks in part to a 49-yard strike from Patrik Schick, and 3-1 to Croatia which included a sumptuous strike from Luca Modric – to finish bottom of Group D with just one point.

Since then, some fans have lent their support to whoever stands the best chance of beating England, with hopes now resting on Italy.

England will be hugely popular with the crowd at Wembley on Sunday with the majority of 60,000 attendees expected to be native thanks to Covid travel bans, but internationally Italy are overwhelmingly the fan favourites.

A poll by French newspaper L’Equipe found that 70 per cent of readers will be cheering for Italy on Sunday, with 11 per cent undecided and just 20 per cent supporting England.