Escape from Wuhan: British student, 27, tells of panic and paranoia while ‘living in fear’ in China

A British student evacuated from Wuhan has today described ‘living in fear’ and suffering panic attacks while trying to avoid coronavirus in China – and life in quarantine in a three-star Milton Keynes hotel with free Netflix and doctors on call 24/7.

Camryn Turner, 27, was in the middle of a music course in the virus-ravaged city when the outbreak, that has now claimed more than 1,100 lives and struck down almost 46,000 worldwide, began over Chinese New Year.

He described ‘panic’ and ‘hysteria’ among fearful residents of Wuhan where pharmacies had sold out of masks and the government was spreading ‘false information’ about how serious coronavirus is and the true scale of cases and deaths.

After catching a flight back home on Sunday, he has since been living at the Kents Hill Hotel in Milton Keynes and is expected to stay under observation for at least 14 days.

Those in quarantine get two adjoining rooms – one for sleeping, the other for leisure with a small kitchen – but get three meals a day, complimentary drinks and snacks, as well as free Netflix to help the hours pass.

It comes as health officials in the UK scramble to track down dozens of people who have come into contact with Britain’s eight confirmed coronavirus patients – including a super spreader businessman who caught the virus at a work conference in Singapore and passed it onto 11 others at a ski resort.

Scout leader Steve Walsh, 53, who accidentally infected friends staying in the same French ski chalet, was released from hospital today after medics declared he is not contagious and ‘poses no risk to the public’.

In other developments in the coronavirus outbreak:

Camryn Turner, 27, is safely in quarantine in this Milton Keynes hotel for the next fortnight after being evacuated from Wuhan 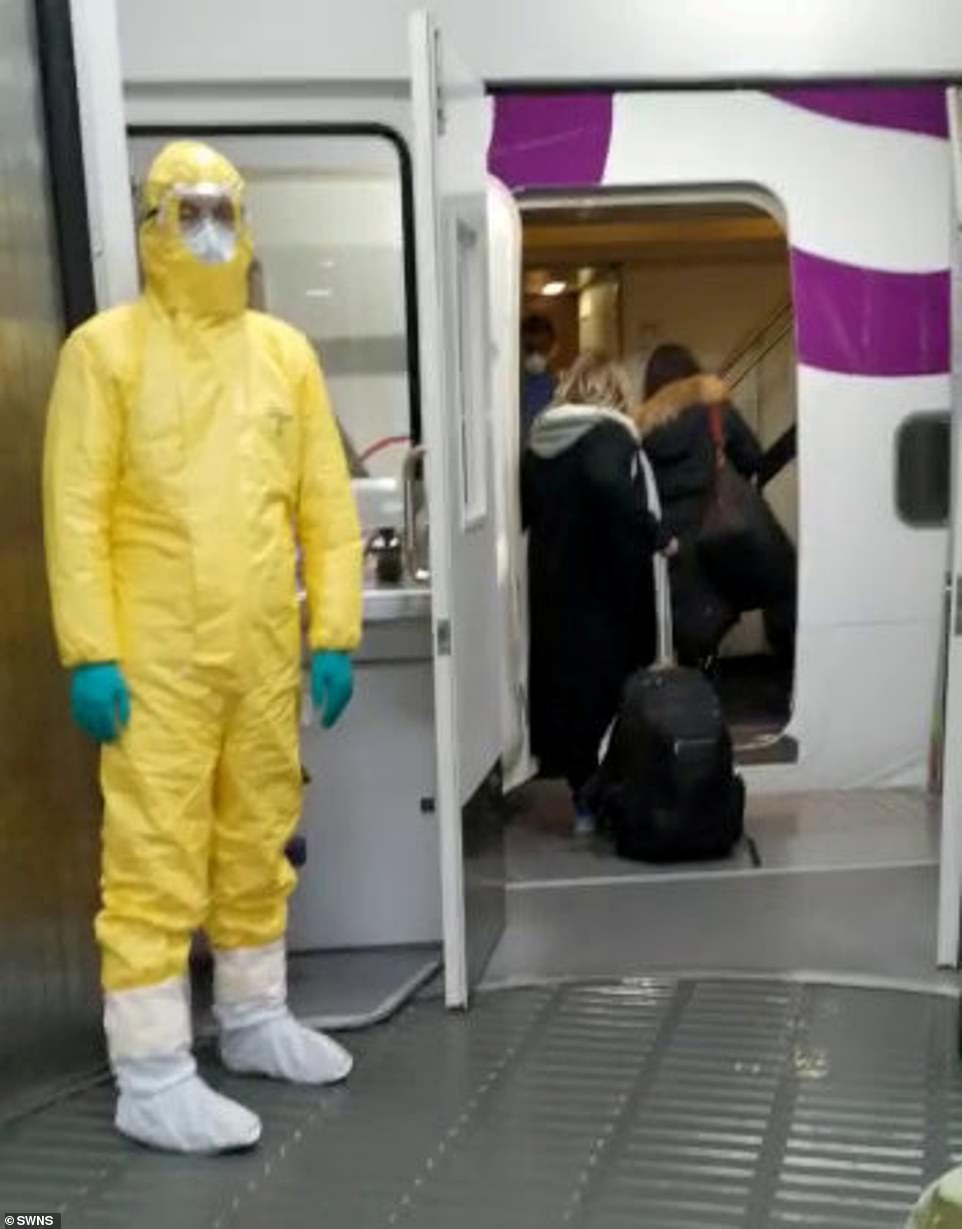 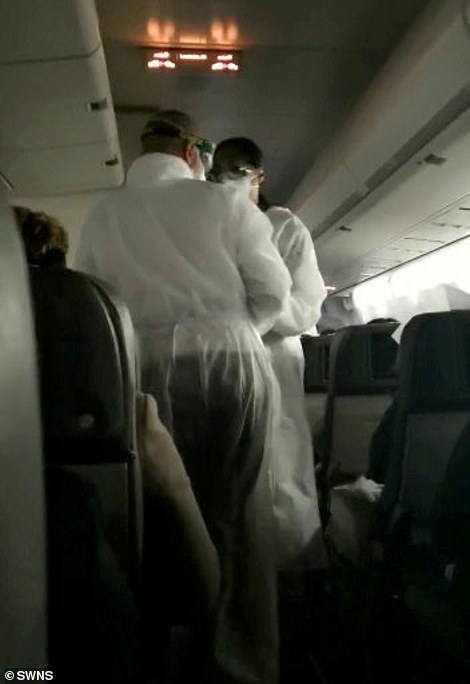 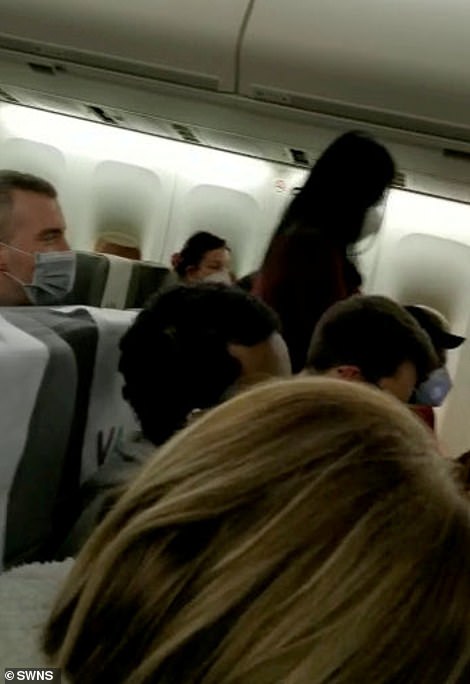 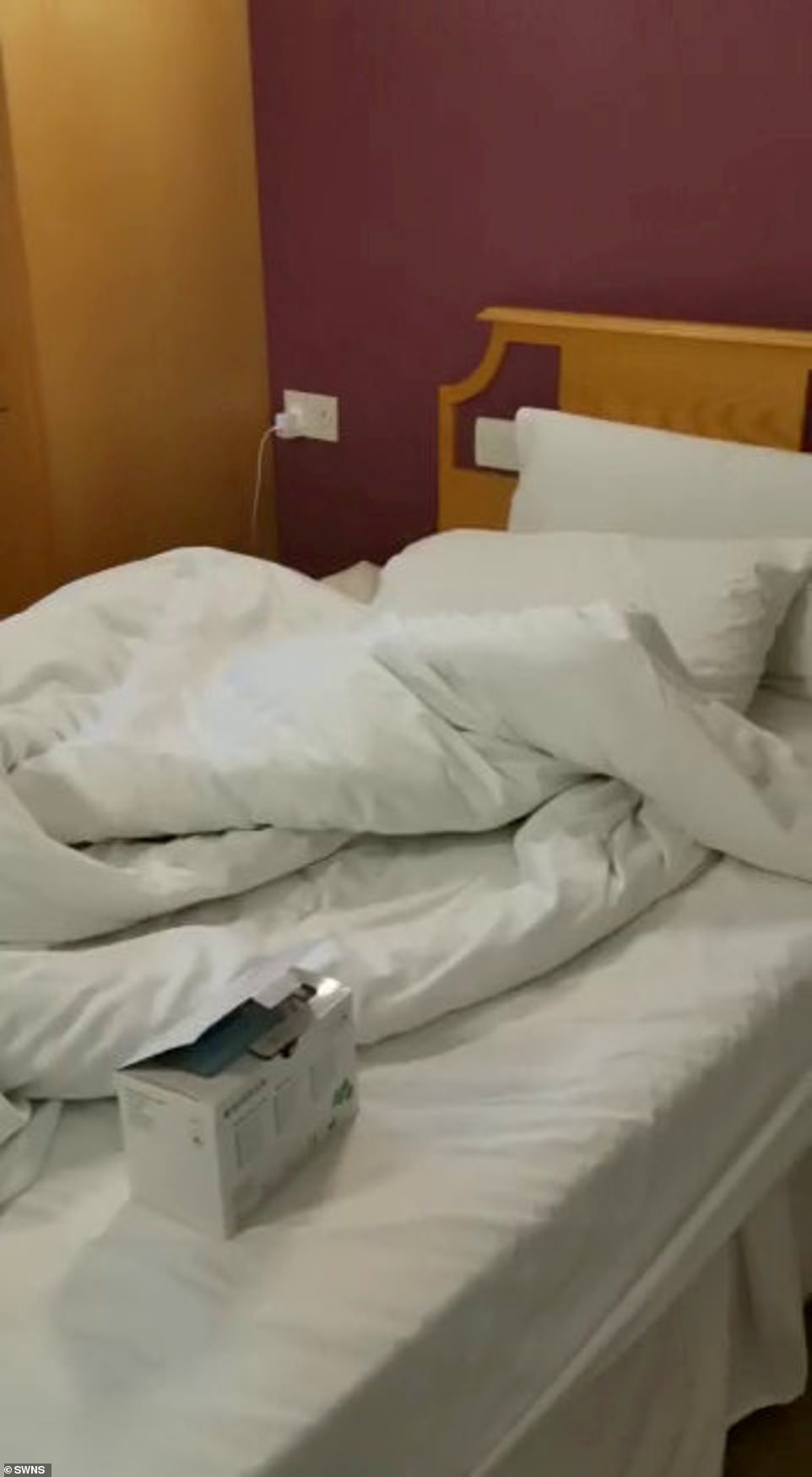 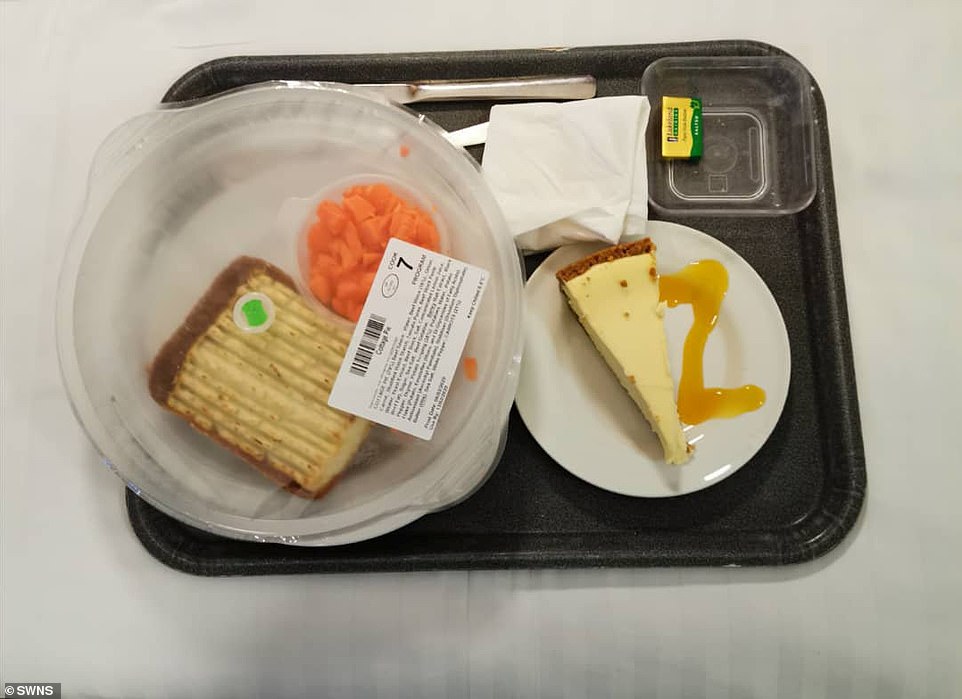 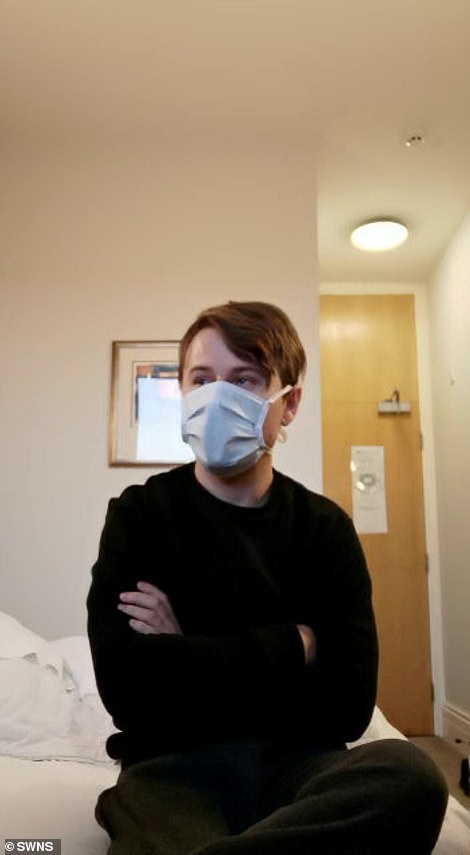 Mr Turner has revealed that those in quarantine get two adjoining rooms – one for sleeping, the other for leisure with a small kitchen – but get three meals a day, complimentary drinks and snacks, as well as free Netflix to help the hours pass.

Camryn has been documenting his time there, which is spent mostly watching TV, reading magazines and sitting on his laptop as he attempts to ‘fight off the cabin fever.

He said: ‘In the initial outbreak in January, we got updates from word of mouth and not the state news.

‘I remember I went out to stock up on food on 22 January and all of a sudden we were told we have to wear masks all the time, now it’s serious.

‘I went into two of my local pharmacies and they said they don’t have any left in stock. It just happened so quickly.

‘Wuhan itself was running smoothly then it immediately went into lockdown. The Chinese authorities took too long to react to it.

‘Chinese Spring Festival was happening and that’s where everyone returns home to see family and friends, so there were people coming in and out of the city.

‘It just stirred up a lot of panic. People just became hysterical and false information was spread. It was so scary.

‘I remember seeing a medical worker post a video on WeChat and she was going absolutely hysterical, saying to stop listening to the Chinese government, they are lying to us.

‘The number of confirmed cases that they were seeing was probably over 100,000 and I just remember everyone panicking.’ 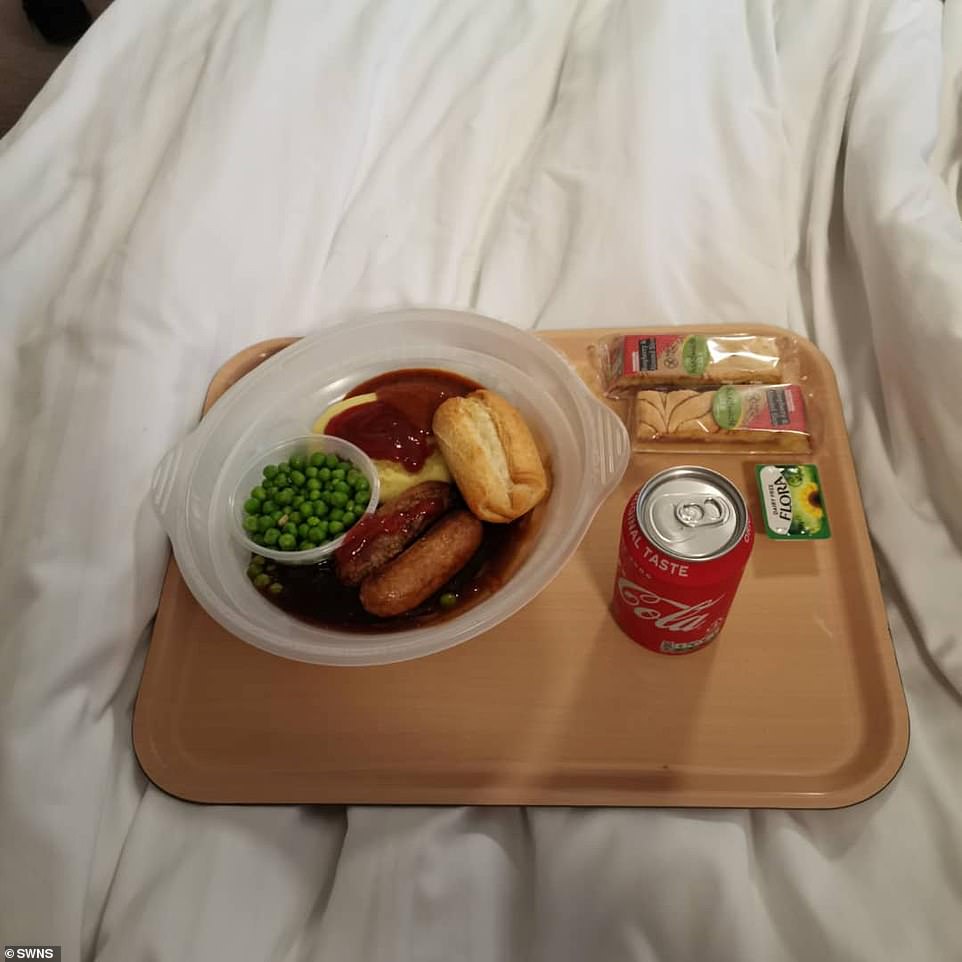 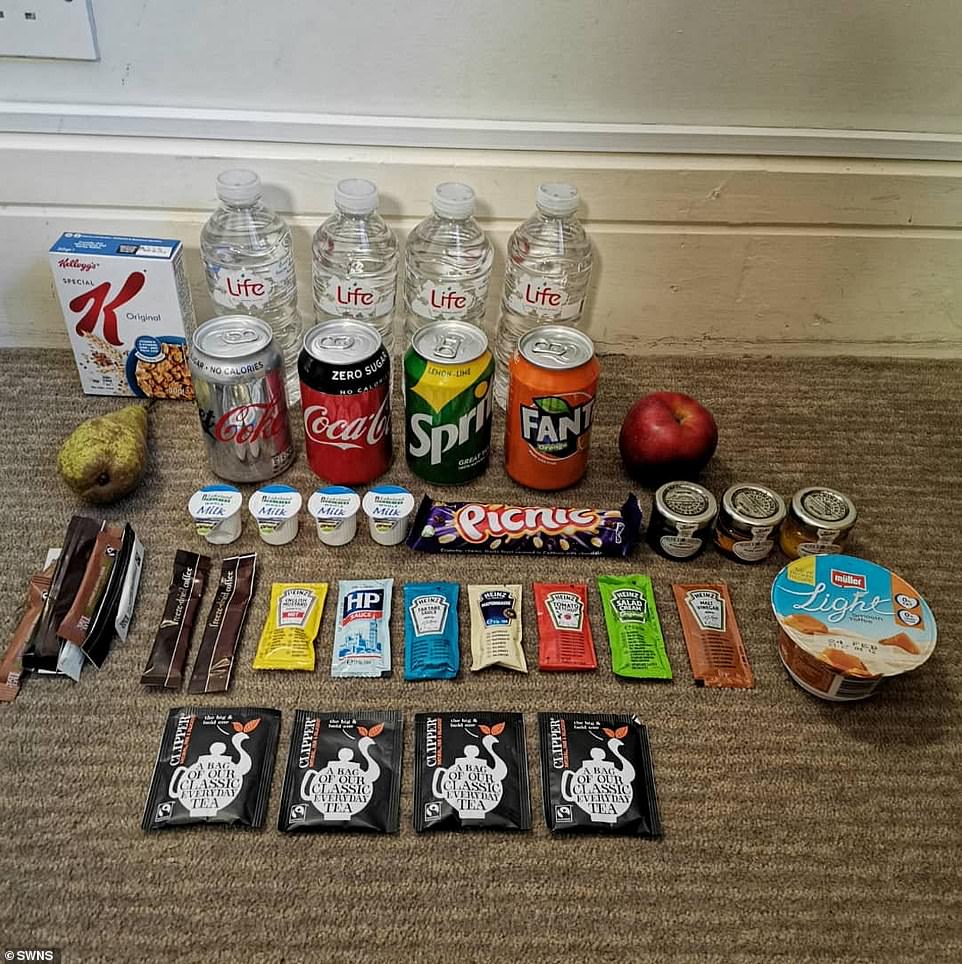 Each guest is given drinks, snacks and of course plenty of tea to pass the hours in quarantine

Camryn called his parents, Sheryl and Julian, in South Africa after a suffering a panic attack over fears for his own safety.

He said: ‘I must have spent a total of about one and a half hours, in those two weeks, going outdoors quickly to stock up on food. So that was quite an experience. It was not easy at all.

‘Also knowing, just outside your apartment windows, there is a deadly virus going around, was really really scary.’

Camryn, a dual citizen with British and South African, returned on the last available plane, headed to the UK, out of the country.

Tipped off by an English friend, whose Chinese partner was also on the flight, he managed to grab one of the last seats on the flight back to Britain at 48 hours notice.

‘One thing I can just say about the British Embassy,’ Camryn continued, ‘is just their incredible service and the blood sweat and tears they went through to put me on that plane.

‘I’m just so grateful that they were willing to go through all that effort.’ 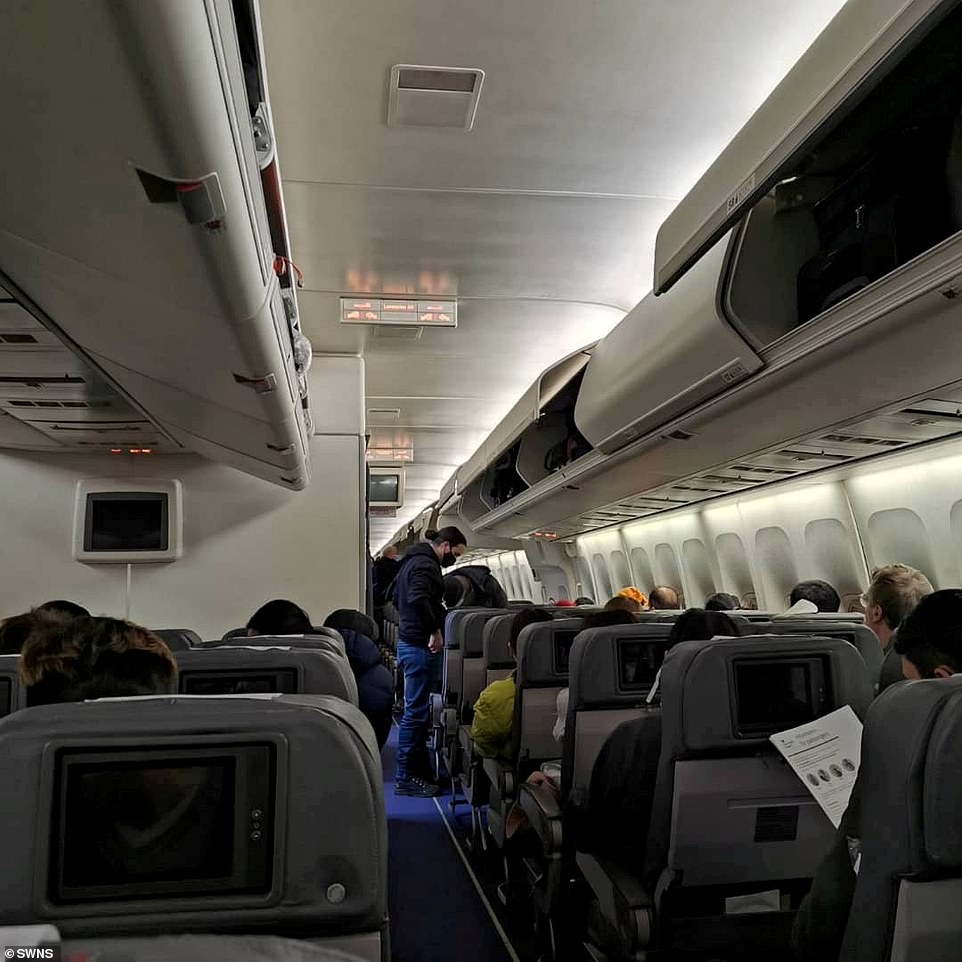 Touching down on Sunday morning, made difficult due to turbulence from Storm Ciara, the passengers were whisked on buses off to the Kents Hill Hotel under police escort.

He continued: ‘When we got here, we were handed and filled out the necessary documentation such as medical information, personal information.

‘We were then called out in groups of four to go for a swab test. This was the only part where I have been scared and got really freaked out.

‘Seeing all these videos in China with all the medical workers dressed up in their bodysuits and then walking into the medical room and seeing it in person, it made it seem more real.

‘It involved the medical staff using extended earbuds and they took samples from our nostrils, as well as the back of our mouth.

‘That process was done twice. We were given our room numbers and our keys.

‘Basically, we’ve all been in our rooms since then. I think I’ve been handling the situation well so far.’

Camryn has praised the medical staff at the facility and says they have access to a wide range of different food and entertainment, with Netflix even available to residents.

He said: ‘We’ve been looked after so well. The first 48 hours of quarantine, we have to be put in full isolation in our bedrooms, so minimal human to human contact.

‘The rooms are great, we have been given information every step of the way. Medical staff call you in your room just to make sure that you’re okay and see if we need anything.

‘We’ve been allocated two rooms, one for sleeping in and leisure time and another for heating up our food and stocking up our cool drinks and sauces, fruits, all that kind of thing.

‘We’ve been offered a wide variety of meals to choose from for breakfast, lunch and dinner. It has its tough times. You get cabin fever symptoms. They can become quite rough during the day. We’ve been supplied with a TV and magazines and games to stimulate our brains.

‘We can still make use of our laptops and phones. I wake up, eat my breakfast and then I will lie a bed and reply to all my unread messages from my friends and family.

‘I’ll also have the TV on, where I prefer to watch sports, maybe a bit of comedy as well. It just makes the situation here a little bit easier.

‘I have managed to get some really good quality sleep while I’ve been here so far. With the healthy food that we’ve been given, that’s helped a lot to feel better.

‘As well as the cool drinks, we’ve also been given snacks. Our fridges have been regularly stocked up, which is great.

‘It just seems to be getting better and better by day. I think the first 48 hours have just been trial and error. Just seeing how things are running.’

If one of the patients tests positive for the deadly coronavirus, the 48-hour isolation quarantine could be extended for another two days.

They have also been told that they should expect to be there for at least two weeks, to be sure that none of the people has picked up the bug.

Camryn said: ‘There are times of frustration, just knowing that this is a whole process on its own again, but it’s for the best just to make sure that everyone is safe.

‘Its also to make sure that once we leave, we don’t infect anyone else outside the quarantine. We have Dettol wipes on standby and have to make sure we stay clean.

‘It’s really nice that we can clean ourselves up every day. It’s basically just the time where we are waiting for the swab results to come back.

‘I’ve caught up on a lot of sleep, which I was not getting because I was so anxious and worried in Wuhan.

‘The healthy food that we are being fed here, I definitely think helps because I couldn’t keep living off instant noodles. I wasn’t getting nutrients and I could have got sick otherwise.

‘Every time one of the medical staff come to our bedrooms, we must wear medical masks at all times and they do the same.

‘I think this is very important for all of us to go through this process here and just to adhere to all the rules and regulations that we have been given.

‘I’m very grateful for everything they have done for us.’