Essex grandmother, 79, faces court for pouring a plate of beef stew over her partner’s head

A 79-year-old grandmother who threw a plate of beef stew over her partner of 20 years’ head during a heated argument will face court charged with assault.

Heidi Chiswell lost her temper during dinner with Peter Hawkins, 70, and smashed his plate when she tipped the stew onto his head.

Peter Hawkins called 999 and reported Ms Chiswell but the couple made up in the minutes police took to arrive at their home in Dunmow, Essex.

Both Mr Hawkins and Ms Chiswell were asked to give statements to Essex police and Ms Chiswell has now been summoned to court charged with assault, the couple told The Sun.

Mr Hawkins was uninjured and told police he did not want to press charges but the grandmother of six will attend court on March 5.

And since the argument Mr Hawkins had a stroke and faces a serious operation with Ms Chiswell acting as his full-time carer.

He told MailOnline: ‘I had a stroke two months ago and I’ve got an artery operation tomorrow.

‘I’m going to be laid out for a long time. The stress of the case has had a big impact on both of us, there’s nothing we want less right now.

‘We have applied for the case to be postponed because of the situation. It was just after I had my stroke Heidi got the letter from the court, it has had a big emotional impact on us.

‘We thought it had gone away, it is something new for us to face.’

Recalling the argument he told MailOnline: ‘It was drink fuelled, we both had too much it was a silly little thing about something or other.

‘She threw the dinner at me and bang it hit me in the head.

‘We were both pretty foul mouthed and I thought ‘that’s it, I’m calling the police’, and I will forever regret that. 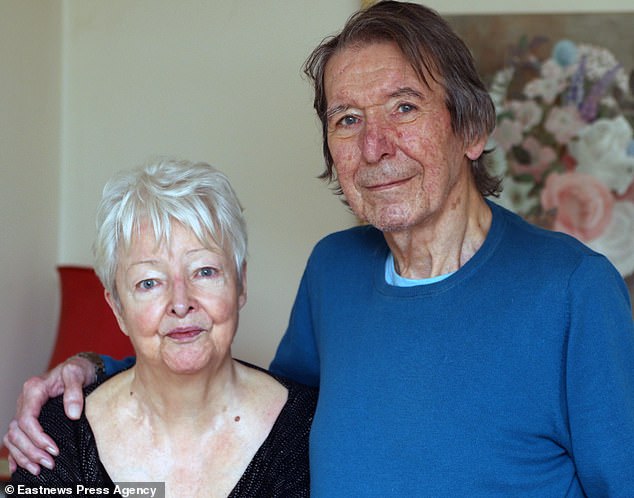 ‘They came and she admitted assault in a statement and the next day I phoned up the police and said I don’t want this to go any further.

‘I’m totally aggrieved by the entire situation, I’ve tried to stop it and the police have said it was out of their hands.

‘The CPS has taken it on given all the facts they have and the fact I’ve said I’m not supporting the case.

‘This is the first time anything like this has happened, we have arguments but there’s no history of this.’

Ms Chiswell will act as Mr Hawkins’ full-time carer while he recovers from a major blood clot removal surgery.

She said: ‘It is a very dangerous operation, he has blood clots.

‘I’m going to have to be his carer for a while. I don’t want anything to happen with the police, I want them to stop. I can’t go on the 5th March with everything going on.’

She added: ‘We have been together 20 years and now this happens, nothing like this has taken place before.

‘I think the whole thing is stupid, after we were sober it didn’t matter anymore.

‘I’m not sure what I’m going to do in court. All this for a broken plate, it was probably just about something silly – like what was on telly. I can’t remember what it was about.’

A spokesman for Essex police said: ‘We were called to reports of a domestic related incident in Dunmow, at around 9pm on Thursday, May 17, 2018.

‘A man was taken to hospital after having received a blow to his head which caused an open wound and a woman was reported for assault.

‘The case was investigated and a file was presented to the Crown Prosecution Service as a matter of policy for a decision to be made.

‘Heidi Chiswell, 79, of The Poplars, Dunmow, has been summonsed to appear at Colchester Magistrates’ Court on Tuesday, March 5, for actual bodily harm.’

The retired customs officer told The Sun: ‘It was a bit of shock getting my dinner tipped over my head and the plate broke when she did it but, surely, the police have better things to do.

‘I wished to God I’d never called them now. I’m unharmed and all I want is them to stop hounding poor Heidi.’

Ms Chiswell will be ‘dragged to court like a criminal for rows couples have every day’ and police should focus on more serious crimes, according to the couple.

The retired interpreter, said: ‘People are running around stabbing each other yet the police come after me for assault with a deadly casserole — it’s ridiculous.’

Ms Chiswell will appear in front of Colchester JPs next month. 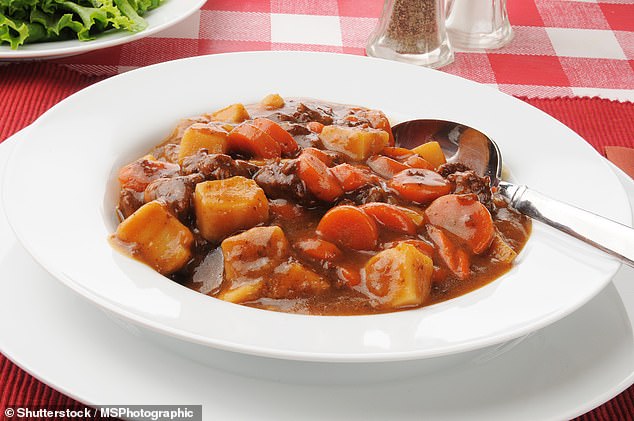