Simon Harmer admits his hopes of playing for England are now ‘dead in the water’.

The Essex off-spinner, 31, who played five Tests for his native South Africa in 2015, told Sportsmail last year he wanted to qualify for his adopted country.

But with his Kolpak status about to be revoked in the Brexit transition, Harmer has given up on qualifying for England and will focus on Essex, starting with Wednesday’s Lord’s showpiece. 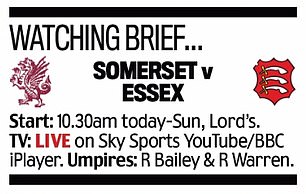 Harmer, who will play at Chelmsford next year as an overseas player, said: ‘I’ve tried my best, not necessarily to play for England but to naturalise here so I can have a few rights, like buy a property.

‘But that door was shut in my face.’