Embattled seaside village Jaywick has today been named as the most deprived neighbourhood in England for a third time in a Government report.

The Essex town, near Clacton-on-Sea, received international coverage last year after it was used in a US election campaign advert – sparking fury among residents.

It has again topped a list that measures deprivation in 32,844 small areas or neighbourhoods across England.

Three years ago Channel 5’s controversial ‘Benefits by the Sea’ was filmed in the town, featuring a pregnant heroin addict and a woman with ‘confused.com’ tattooed on her forehead.

Some eight neighbourhoods across the seaside resort of Blackpool account for the rest of the top 10 most deprived nationally, alongside an area of the Anfield district of Liverpool.

The ramshackle seaside town in Essex has been named for the third time in ten years as the most deprived neighbourhood in England – out of more than 32,000 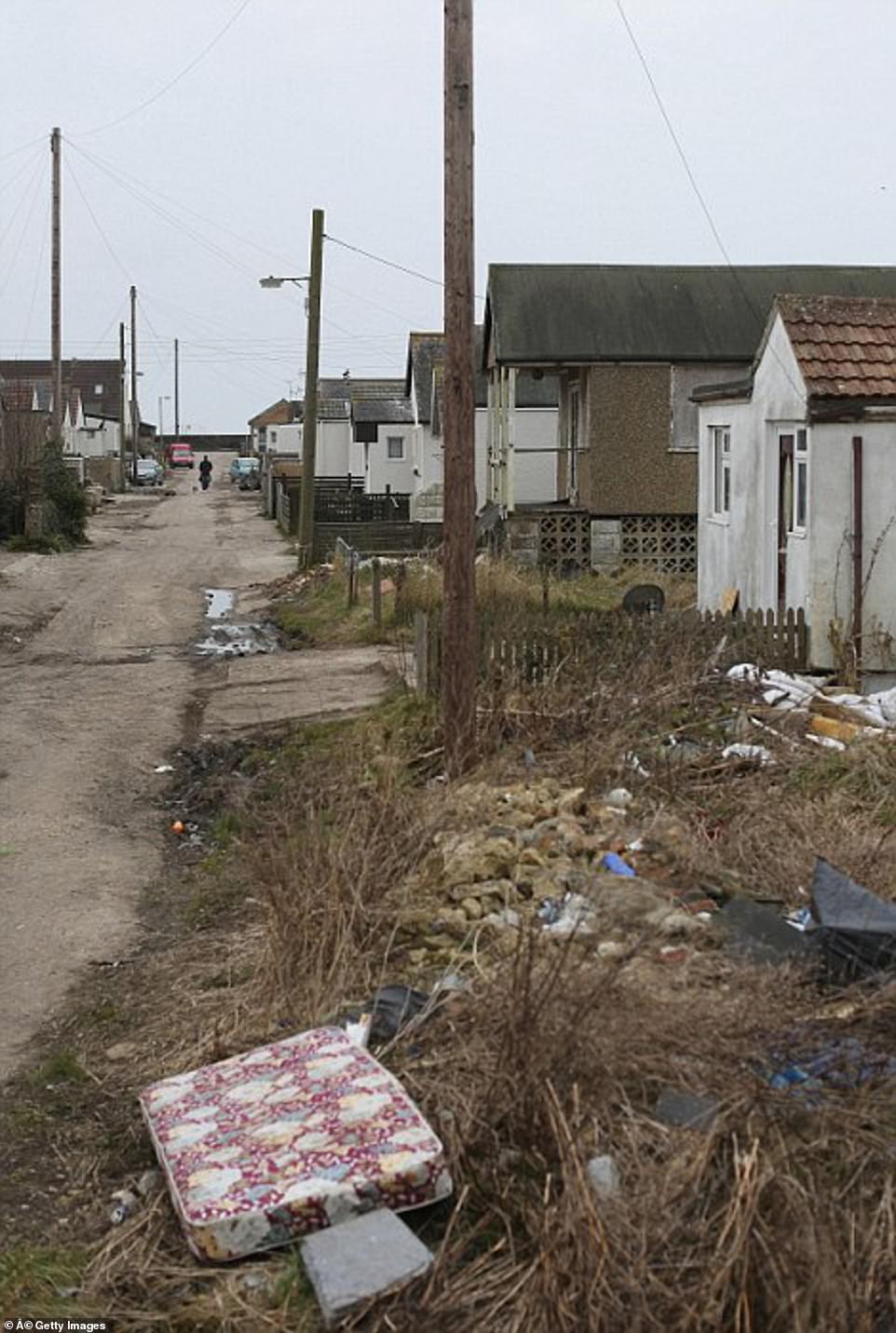 Jaywick Sands – the subject of critical TV documentaries like ‘Benefits on Sea’, struggles to overcome its negative image of crime, drugs and poverty 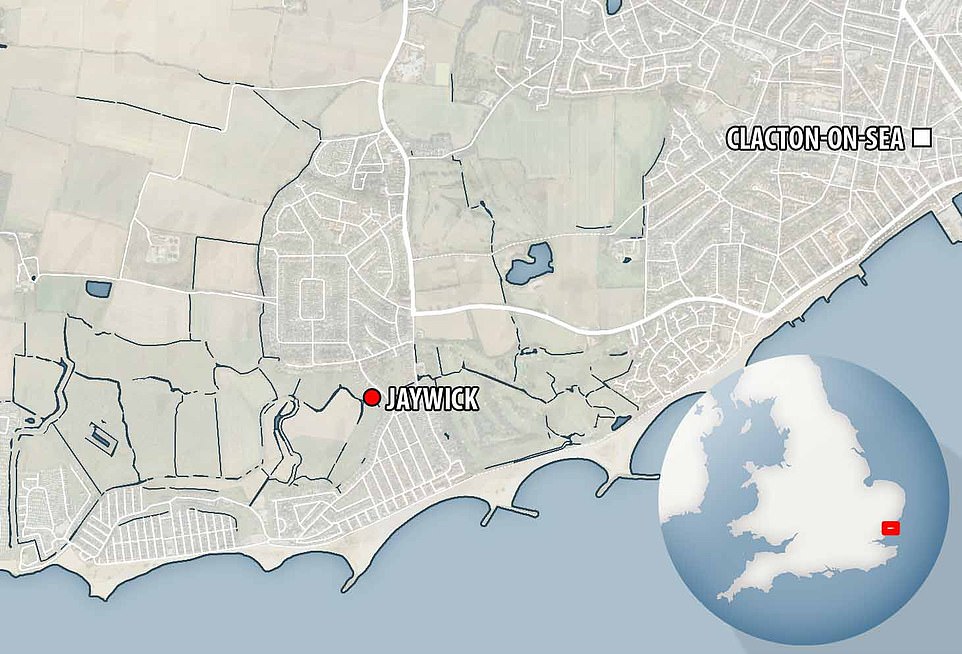 Once billed as an idyllic seaside holiday village, Jaywick is now blighted by dilapidated homes, boarded-up shops and discarded rubbish, in spite of efforts to clean up the area.

TOP 10 MOST DEPRIVED NEIGHBOURHOODS IN ENGLAND

Here is a list of the 10 most deprived neighbourhoods in England, according to the 2019 Indices of Deprivation published by the Ministry of Housing, Communities and Local Government.

Each neighbourhood is identified not by a name but a number (known as the Lower-layer Super Output Area number). This is followed by a brief description of the location of the neighbourhood.

Area on the western edge of Jaywick near Clacton-on-Sea that includes the Brooklands Estate and runs up to the eastern edge of Seawick.

Neighbourhood immediately north of the Odeon cinema, including Central Drive from Rigby Road to Chapel Street, and across to the Promenade opposite the central pier.

Area to the west of Blackpool North railway station across to the Promenade, then north as far as Derby Road.

Area immediately around the bus depot and tram shed, stretching south as far as Bloomfield Road and north as far as Pier Street.

Neighbourhood lying to the north west of Blackpool South railway station, including most of Lytham Road and the Promenade up to the central pier.

Area to the south west of Blackpool South railway station, stretching west to the Promenade and south towards Balmoral Road.

Area immediately to the east of (or behind) Blackpool town hall, including St John’s church, running as far east as Buchanan Street and north towards Blackpool North railway station.

Area immediately to the north of (or behind) Blackpool North railway station, along Talbot Road as far as Cooper Way, and towards edge of Dickson Road.

Jaywick is famed for its grid of ‘temporary’ chalets built in the 1930s by businessman Frank Stedman, who wanted to create a holiday village.

After the Second World War, a general shortage of housing meant that the Jaywick properties gradually became permanently inhabited – even though they were not designed for regular use.

This permanent use, combined with local community resistance to the demolition of the worst estates, helped to contribute to the current state of the area.

All of the local authorities with the highest proportion of deprived neighbourhoods are in the north – Middlesbrough, Knowsley, Hull, Liverpool and Manchester – and remain unchanged from 2015.

Flood-prone coastal town of Jaywick, also known as Jaywick Sands, has a population of around 5,000.

The area specified by the report’s authors – to the west of the village – was ranked as the most deprived neighbourhood in deprivation indices in both 2010 and 2015.

MP for Clacton Giles Watling said he was ‘very disappointed’ by the Government report and pledged to engage with and better support the population of Jaywick.

‘As always, I could not be any more enthusiastic and optimistic about Jaywick and its future,’ he said.

‘It is an area of truly outstanding natural beauty, and the people there have a lot to offer – not least because of their strong sense of community. I truly want to see the area thrive.’ 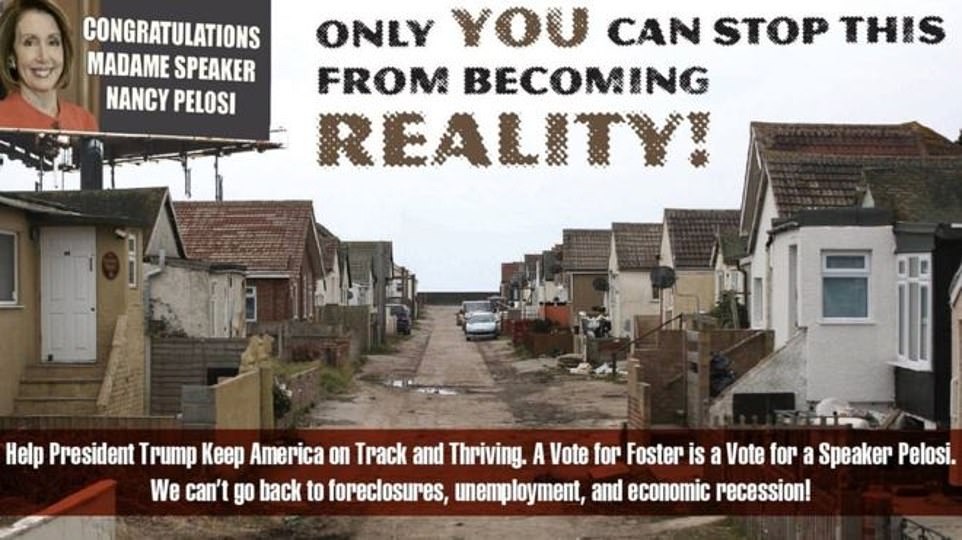 The advert, pictured, for Republican congressional candidate Dr Nick Stella used a picture of Jaywick Sands to warn voters of the ‘consequences’ of supporting the Democrats

A bleak picture of the area, showing unpaved roads and dilapidated homes, was used by a Republican Congressional candidate to warn voters of what America could be like if they didn’t support President Trump.

The political advert supported Dr Nick Stella in the 11th Illinois district race against Democrat Bill Foster ahead of the midterm elections.

The advert, which was shared on Dr Stella’s Facebook page, said: ‘Help President Trump keep America on track and thriving. A vote for Foster is a vote for a Speaker Pelosi. We can’t go back to foreclosures, unemployment and economic recession!’

Across the top of the image, next to a picture of Congresswoman Pelosi, it reads: ‘Only YOU can stop this from becoming a REALITY!’

It sparked anger among residents, who said it ‘hurt’ to have their homes mocked. 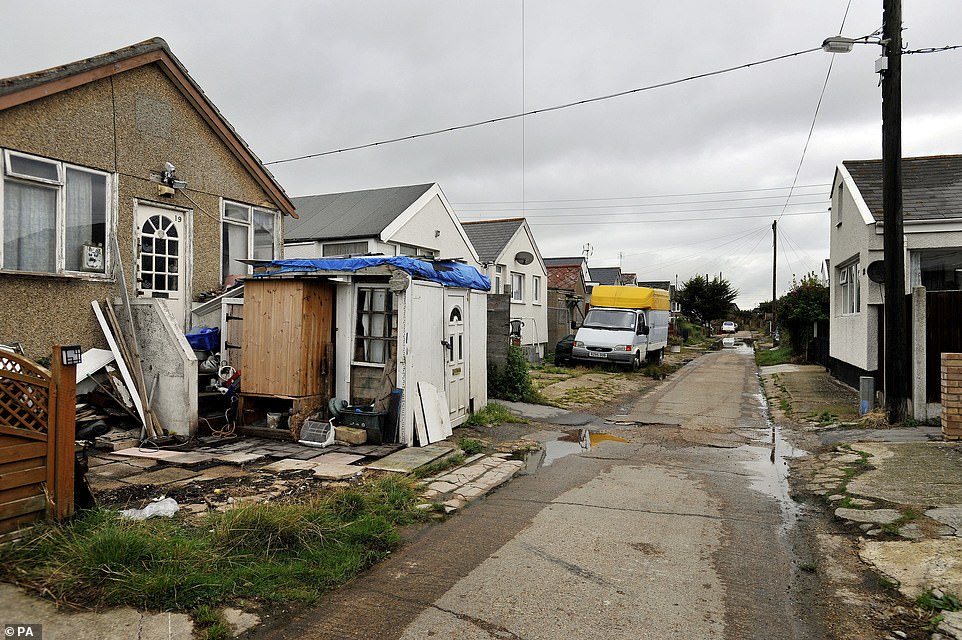 The grid of ‘temporary’ chalets built in the 1930s by businessman Frank Stedman, who wanted to create a holiday village 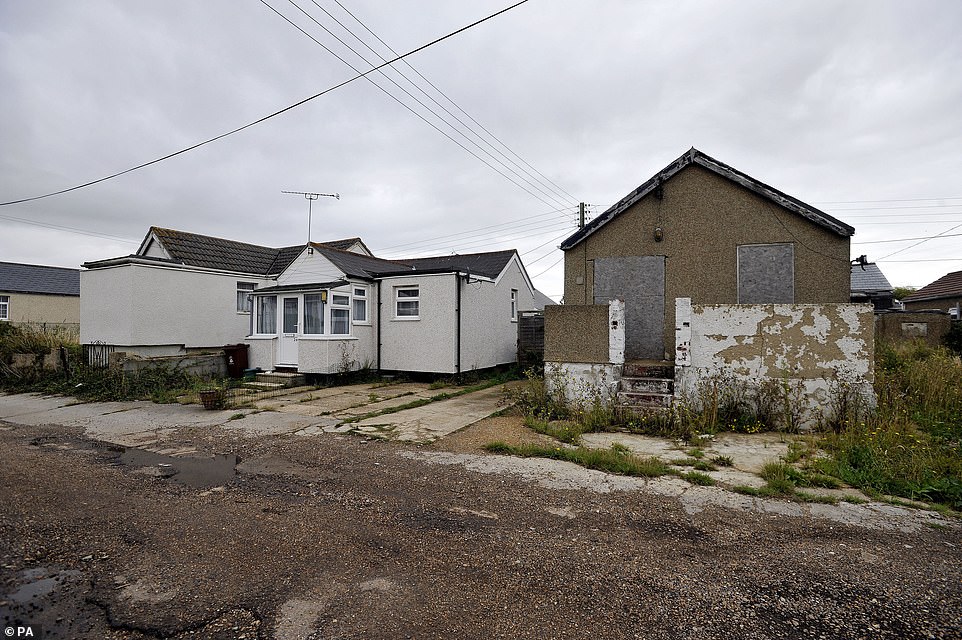 Once billed as an idyllic seaside holiday village, the community is now blighted by dilapidated homes, boarded-up shops and discarded rubbish in spite of efforts to clean up the area 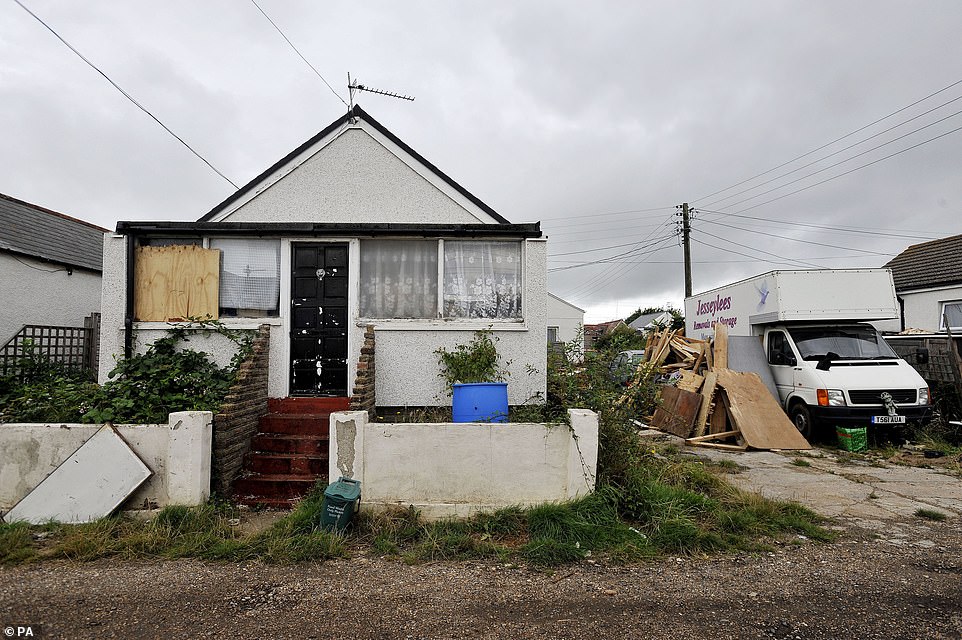 Earlier this year shocking pictures showed huge piles of rubbish in the village which residents demanded be cleaned up after describing it as a ‘Third World tip’.

The Ministry of Housing, Communities & Local Government indices are based on the most up-to-date information available from seven specific areas.

Data from income, employment, education, health, crime, barriers to housing and living environment are all used to measure levels of deprivation.

A number of London boroughs have seen decreases in the proportion of their neighbourhoods that are highly deprived, according to the authors, particularly in Tower Hamlets and Westminster.

The least deprived area of England is a neighbourhood nestled in the Chiltern Hills near Amersham, Buckinghamshire.

A Government spokesman said: ‘The Government is committed to levelling across the country and with unemployment levels continuing to fall and wages rising at their fastest in over a decade, we’re committed to supporting families with their cost of living.

‘We’re providing more support to the most deprived authorities, which now have a spending power 16% higher per home than the least deprived.’ 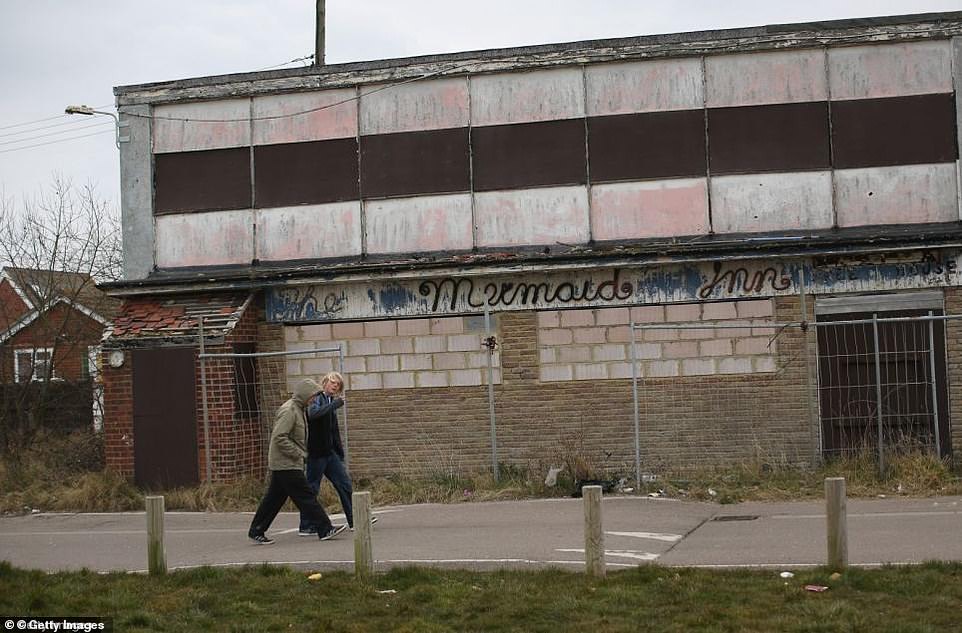 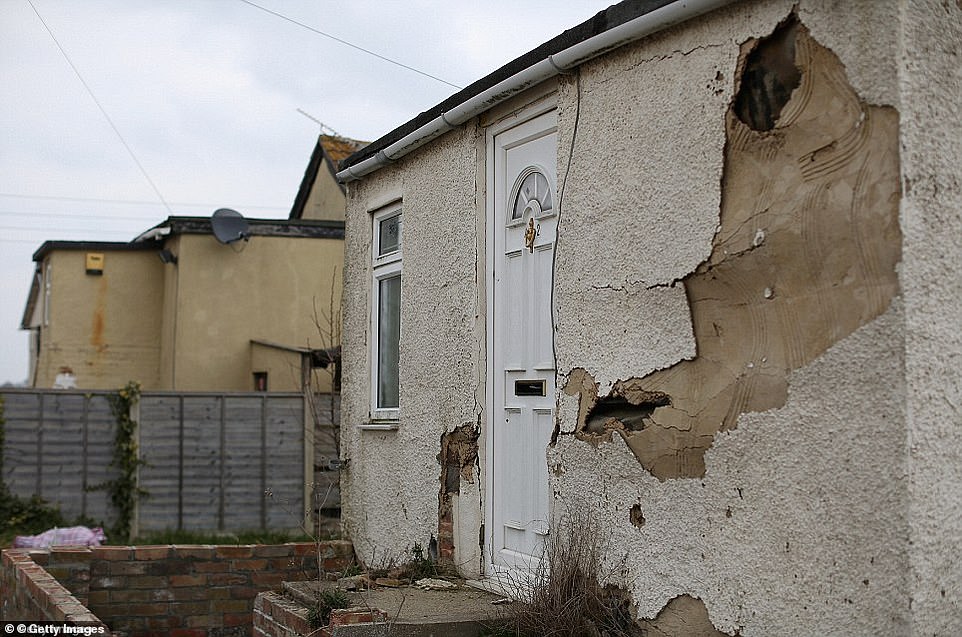 The Ministry of Housing, Communities and Local Government looked at comparative levels of income, employment, education, health and crime as well as housing services and living environment to compile the list 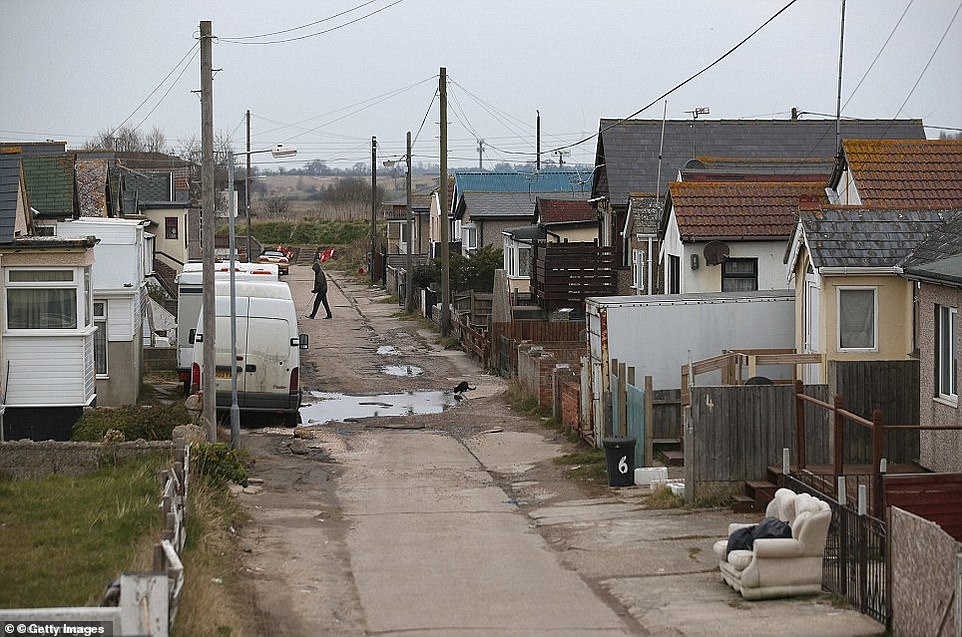 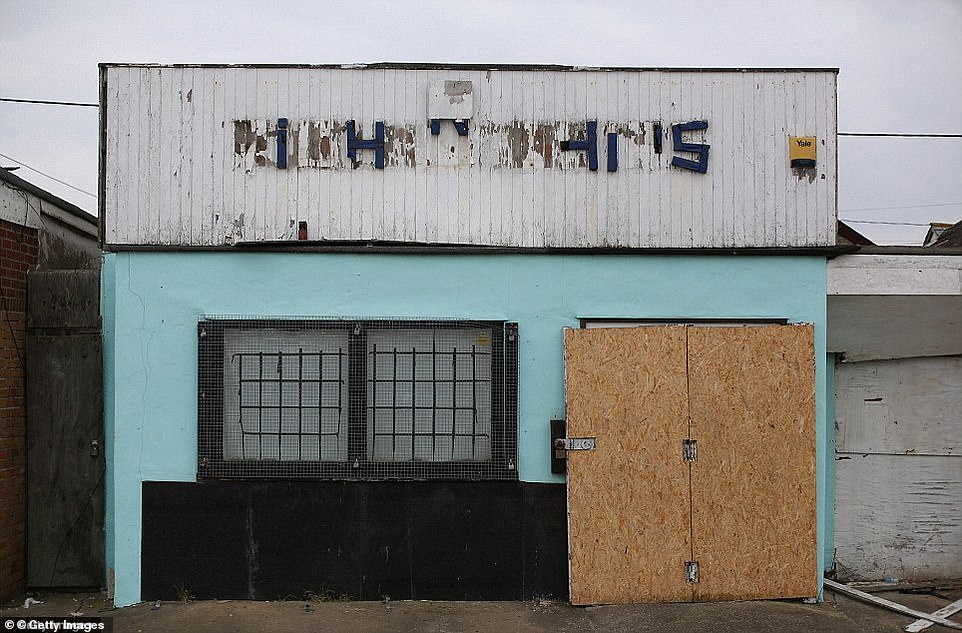 Boarded up shops, crumbling buildings and rubbish add to the area’s dilapidated and run-down appearance

Essex County Council completed a two-year £6.5million programme to improve the roads and drainage in Jaywick Sands in 2017