By David Churchill For The Daily Mail and Associated Press

The European Union agreed a trillion-euro bailout last night to shore up the bloc’s coronavirus-hit economy.

French finance minister Bruno Le Maire, who labelled the agreement the most important in the EU’s history, said €500 billion (£430billion) will be made available immediately, with the remainder in a fund for specific countries.

Following the deal, he said: ‘Europe has shown it can rise to the occasion of this crisis.’

The decision came amid warnings from Italian Prime Minister Giuseppe Conte that the pandemic could cause the collapse of the EU. He hit out during a row between member states over how to share debts created by the economic tsunami sweeping the bloc.

Italy, backed by six other nations, wanted EU countries to take on a bigger share of eurozone-wide debts.

But Holland and Germany wanted a bailout solution to come with stricter rules.

Before last night’s meeting of EU finance ministers, Mr Conte had warned of the risk to the EU if agreement could not be reached. He said: ‘If we do not seize the opportunity to put new life into the European project, the risk of failure is real.

‘We are not demanding that Germany and the Netherlands pay our debts, I’m calling for the fiscal rules to be relaxed.

‘Otherwise we’ll have to write off Europe and everyone will do their own thing. We can’t end up with ‘operation successful: patient dead’.’

Mr Conte was joined by Spanish PM Pedro Sanchez, who added: ‘The EU is at risk if there is no solidarity.’ Italy and Spain have been worst hit by the virus in Europe.

The deal struck Thursday did not, however, include more far-reaching co-operation in the form of shared borrowing guaranteed by all member countries.

It leaves the issue open as leaders look forward to a further discussion about a fund to support the economic recovery in the longer term.

Borrowing together to pay for the costs of the crisis was a key demand from Italy, whose already heavy debt load is expected to increase because of the recession caused by the virus outbreak.

Mario Centeno, who heads the finance ministers’ group from euro countries, called the package of measures agreed upon ‘totally unprecedented’.

He said: ‘Tonight Europe has shown it can deliver when the will is there.’

The ministers agreed that hard-pressed governments such as Spain and Italy could quickly tap the eurozone’s bailout fund for up to 240 billion euros (£210 billion), with the condition that the money is spent on their health care systems and the credit line expires after the outbreak is over.

The agreement also provides for up to 200 billion euros (£175 billion) in credit guarantees through the European Investment Bank to keep companies afloat and 100 billion euros (£88 billion) to make up lost wages for workers put on shorter hours.

Mr Centeno said that countries would work on a recovery fund for the longer term and as part of that would discuss ‘innovative financial instruments, consistent with EU treaties’. 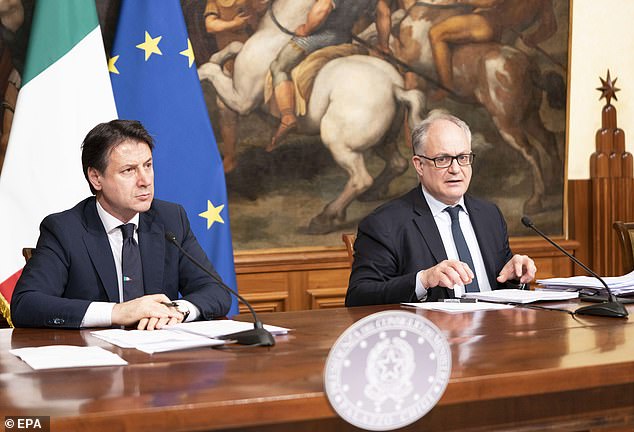 Italian PM Guiseppe Conte (left, with his finance minister Roberto Gualtieri) earlier said he feared the economic downturn from Covid-19 could cause the whole EU to collapse

He said that some countries support shared borrowing and that others oppose it.

The deal overcame bitter disagreement between Italy and the Netherlands over the conditions for loans from the bailout fund, the European Stability Mechanism.

Italy had rejected the idea of using the fund because the money comes with tough conditions that recalled the austerity imposed on Greece, Ireland and other indebted eurozone countries that were bailed out during the eurozone debt crisis in 2010-2015.

The compromise struck in the final statement says that countries could borrow up to 2% of annual economic output at favourable rates to finance ‘direct or indirect’ costs of the current health crisis.

The question now is whether the package will be seen as big enough to impress markets and prevent new accumulations of government debt from triggering a new eurozone financial crisis.

For now, bond-market borrowing costs of indebted countries such as Italy are being held in check by the European Central Bank, which has launched an 870 trillion-euro bond purchase programme.

But that programme is so far limited in size or duration.