Polls opened in the UK and Netherlands on Thursday as voting got underway to decide the make-up of the European Parliament.

Ballots will be cast across the 28-nation bloc until Sunday, pitting pro-European centrists against a rising tide of populism and Euroskepticism.

It comes against the backdrop of Britain attempting to negotiate its way out of the trading bloc following the Brexit referendum.

Geert Wilders, leader of the Dutch Freedom party and a nationalist figurehead, casts his vote in The Hague on Thursday as voting gets underway in the EU elections 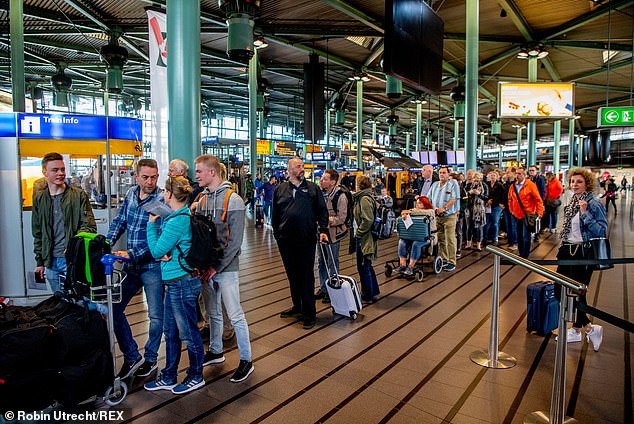 Polling stations opened in the Netherlands (Amsterdam airport, pictured) and the UK on Thursday, and will continue across all 28 member states until Sunday 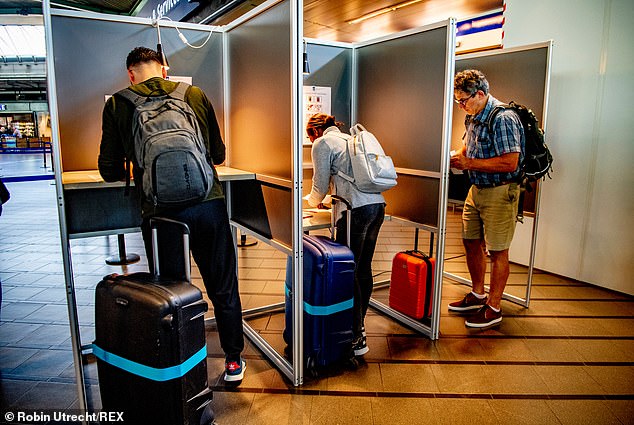 Geert Wilders, leader of the Dutch Freedom party and one of Europe’s most outspoken nationalists, cast his ballot at The Hauge on Thursday morning.

Hours earlier, he had attended a rally alongside other populist, nationalist and far-right leaders in Milan where they issued a cross-continental rallying cry against the European Union.

Aside from Salvini, who serves as the deputy Prime Minister of Italy in a coalition, all of their parties have failed to gain power at domestic elections.

However, big wins at the European Elections – where proportional voting systems often favour smaller, less-established parties – would send a message to Brussels about the direction the continent is heading in.

The pro-European bloc is being led by Germany’s Angela Merkel and France’s Emmanuel Macron, who insist that unity is the best buffer against shifting economic and security interests of an emerging new world order. 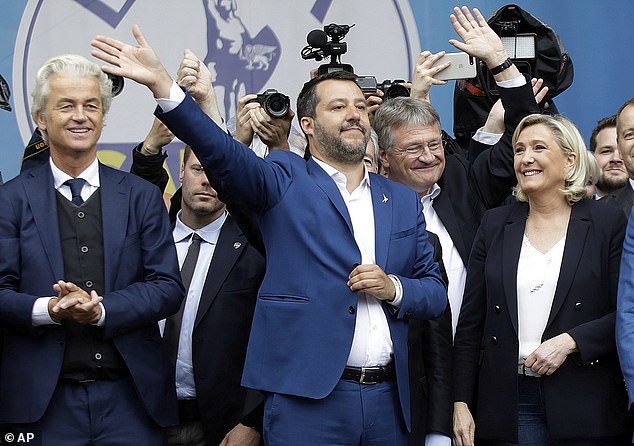 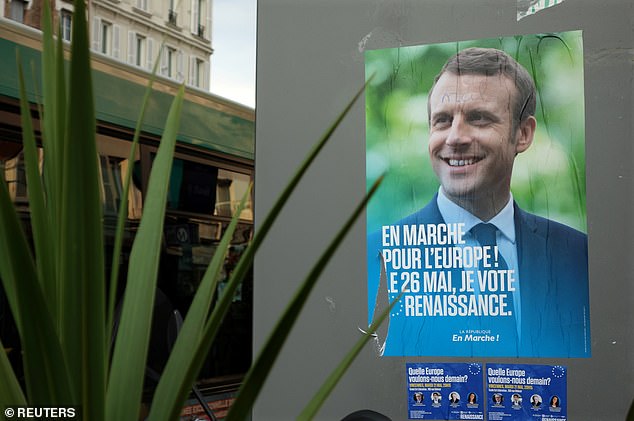 French President Emmanuel Macron has pitched himself as Europe’s foremost pro-EU politician, after Angela Merkel announced her intention to step down 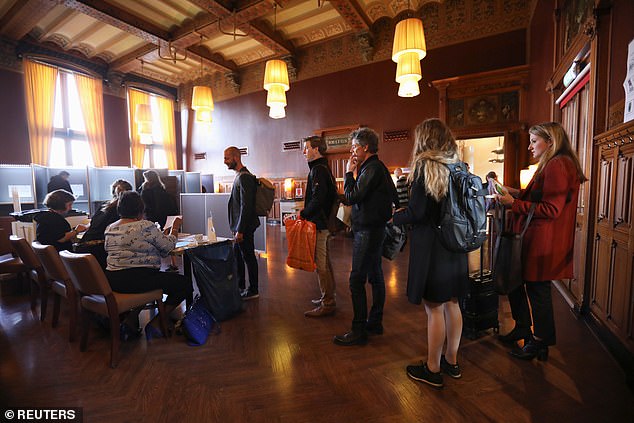 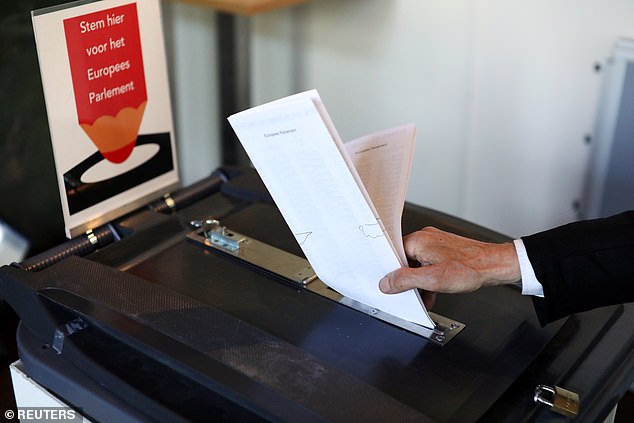 While populist parties have largely failed to gain power in domestic elections, a strong showing in European elections would send a signal about where the continent is headed

President Macron says the challenge is ‘not to cede to a coalition of destruction and disintegration’ that will seek to dismantle EU unity built up over the past six decades.

On Thursday morning, U.K. Labour leader Jeremy Corbyn released a message with a warning that ‘the far-right is on the rise’ and adding that ‘the actions we take now will have huge consequences for our future.’

Voters across Europe elect a total of 751 lawmakers, although that number is set to drop to 705 when the UK leaves the EU.

The Dutch make up just 26 currently and 29 after Brexit.

The UK has 73 European lawmakers, who would lose their jobs when their country completes its messy divorce from the EU.

Results of the four days of voting will not be officially released until Sunday night, but Dutch national broadcaster NOS will publish an exit poll after ballot boxes close Thursday night.

The Netherlands could provide a snapshot of what is to come. Polls show the right-wing populist Forum for Democracy led by charismatic intellectual Thierry Baudet running neck-and-neck with the center-right VVD party of Prime Minister Mark Rutte.

While the country, an affluent trading nation, profits from the EU’s open borders and single market, it also is a major contributor to EU coffers. 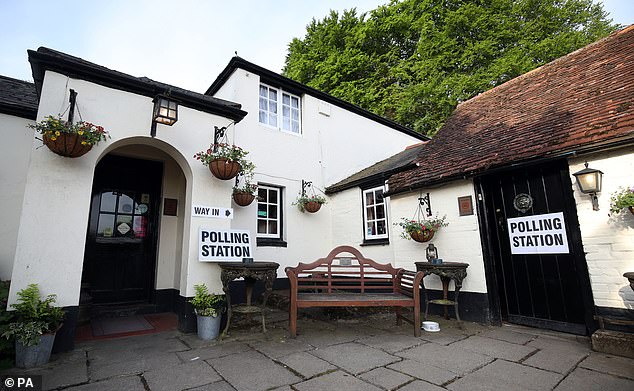 Britain was not scheduled to take part in the elections, having announced its intention to leave Europe on March 29, but after a failure of negotiations is now participating 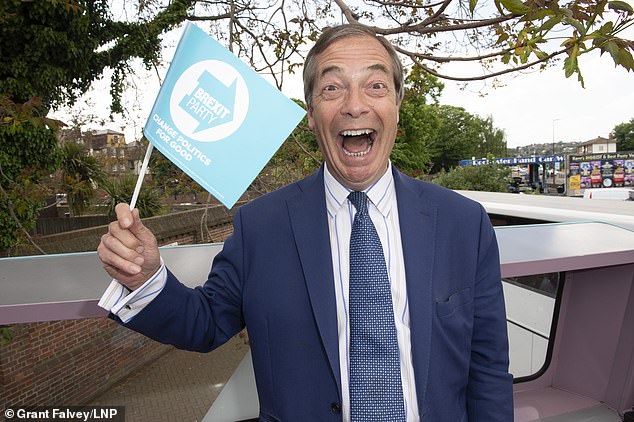 Nigel Farage’s newly-formed Brexit Party is leading the polls, amid warning that anything other than a strong anti-EU showing will be used as a reason to hold a second Brexit referendum 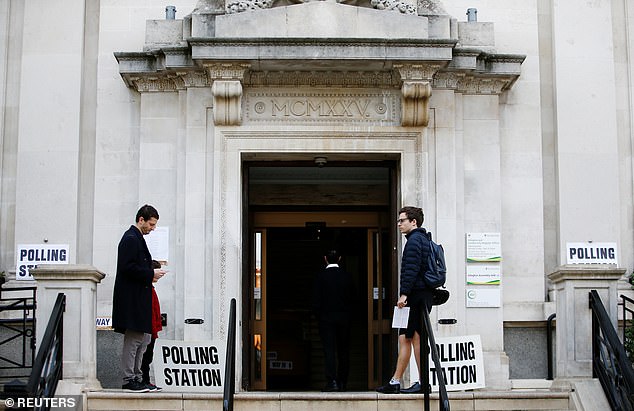 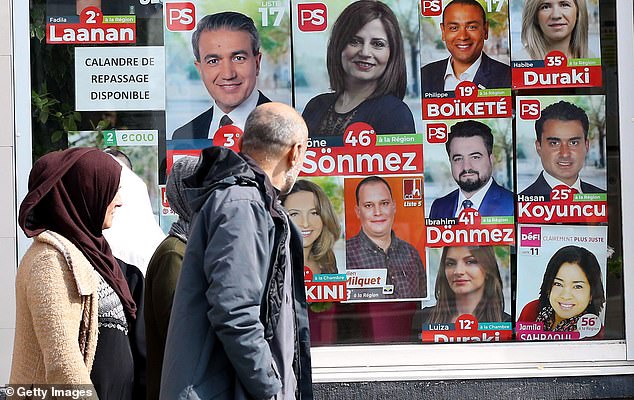 Elections will continue across the EU until Sunday, when the results will be announced (pictured, campaign posters in Belgium)

Skeptical Dutch voters in 2005 rejected a proposed EU constitution in a referendum.

Baudet, whose party emerged as a surprise winner of provincial elections in March, identifies more with hard-line Hungarian Prime Minister Viktor Orban than with the nationalist populist movement led by Salvini.

However, in a debate Wednesday night, Baudet called Salvini a ‘hero of Europe’ for his crackdown on migration.

‘The immigration we get here from Africa and the Mideast is completely contrary to our culture, our values, our way of life, tolerance, love of women and so on,’ he said.

‘That has to stop and it will not happen at the European level.’

Meanwhile, in the UK, the governing Conservative party – which has been handling the country’s shambolic Brexit negotiations – is braced for an electoral wipeout amid speculation that Prime Minister Theresa May could be forced from power.

Nigel Farage’s Brexit Party has been polling strongly ahead of the vote, with the Euroskeptic figurehead warning that anything other than a strong anti-EU result will be used as a reason to hold a second referendum on Brexit.

Pro-Remain Liberal Democrats – who have been leading calls for a second referendum – polled well in recent local elections, leaving the result far from certain.

A breakaway group of MPs from both Labour and Conservative parties campaigning for Remain under the moniker Change UK has further complicated the picture.