Emmanuel Macron today warned he will not allow French fishermen to be ‘sacrificed to Brexit’ as he stuck to his negotiating red lines and dealt a fresh blow to hopes of the EU and the UK striking a trade deal.

The French President laid down the gauntlet to Boris Johnson when he arrived at a crunch summit of the European Council in Brussels as EU leaders meet to discuss the state of trade negotiations with Britain.

Mr Johnson had set the summit as his deadline for agreeing the broad outline of a trade deal with the bloc but the two sides remain deadlocked in a number of areas, most notably post-Brexit fishing rights.

Mr Macron wants French trawlers to maintain the same access they have to British waters as they do now but Downing Street is adamant that UK boats will be given priority.

The French President is facing growing pressure from Germany to compromise on the issue amid fears his unwillingness to budge on fish could sink the entire trade deal.

But Mr Macron dug in this afternoon as he said: ‘The fishermen will not in any situation be those sacrificed to Brexit. We didn’t choose Brexit. Preserving access for our fishermen to British waters is an important point for us.’

Mr Johnson last night expressed his ‘disappointment’ at the lack of progress made during trade talks in the run up to the summit as he now weighs up whether to walk away from negotiations.

Downing Street said the PM will ‘reflect’ on the outcome of today’s summit before setting out his ‘next steps’.

Mr Johnson could opt to quit the talks if he believes a deal is not in sight, putting the UK and EU on course to split without a trade accord at the end of the transition period in December.

But he has reportedly been advised by Lord Frost not to walk away, with the UK’s chief negotiator apparently of the belief that a deal is still possible, potentially within the next two weeks. 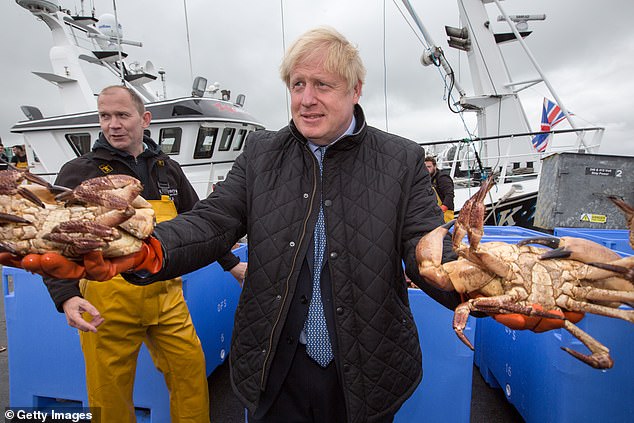 But after the Brexit transition period the UK will regain sole control of its Exclusive Economic Zone and will be able to decide which countries can fish there and how much they can catch.

The Brexit comments made by Mr Macron and German Chancellor Angela Merkel at today’s summit will be watched closely by Number 10 because they will help inform the PM’s decision on what will happen next.

Any movement from Mr Macron on fishing would prompt fresh optimism that a deal could yet be agreed but if he continues to maintain his red lines then Mr Johnson could feel it is time to cut his losses.

Mr Macron wants to preserve the same level of access to UK waters for French trawlers as they have now.

But Downing Street wants to bring in new rules, taking advantage of Britain’s post-Brexit status as an independent coastal state, which would give UK boats priority access.

Germany is increasingly concerned the fishing disagreement could scupper the overall talks with Berlin pointing out that a no deal split could actually leave French boats with no access to British waters.

A German government source told The Express: ‘Everybody knows that if there is no deal then European quota in British waters is zero – now it’s 100.’

The two sides are also still unable to come to an agreement on so-called ‘level playing field’ arrangements on EU rules and on the governance of the trade deal.

Mr Johnson said on September 7 that ‘there needs to be an agreement with our European friends by the time of the European Council on October 15 if it’s going to be in force by the end of the year’.

October 15 has now slipped to October 16 as the PM waits to weigh up the outcome of the European Council.

EU member states are due to discuss the state of the Brexit talks with chief negotiator Michel Barnier before dinner this evening.

A Downing Street spokesperson said: ‘The leaders discussed the latest state of play of the negotiations on our future relationship with the EU, ahead of the October European Council.

‘The Prime Minister noted the desirability of a deal, but expressed his disappointment that more progress had not been made over the past two weeks.

‘The Prime Minister said that he looked forward to hearing the outcome of the European Council and would reflect before setting out the UK’s next steps in the light of his statement of 7 September.’ 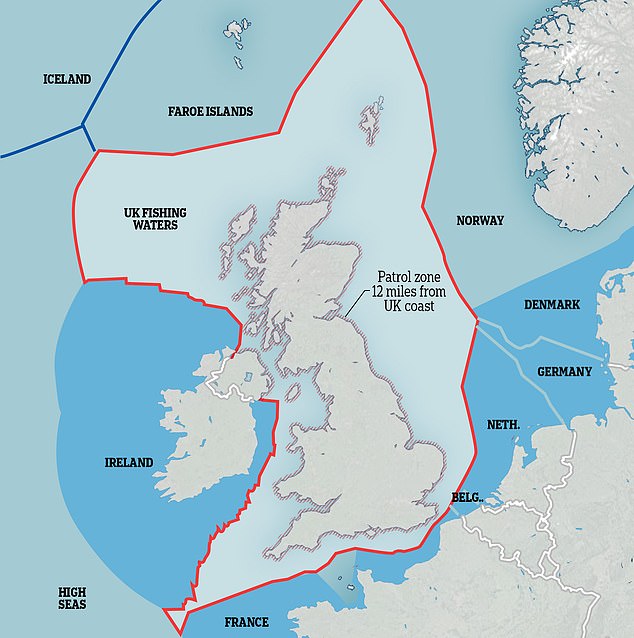 This map shows the extent of the UK’s Exclusive Economic Zone – the waters Britain will take back control of after Brexit. At the moment the EEZ of every EU member state is merged into one large zone which can be accessed by fishermen from all over Europe.

Many in the EU are sceptical that Mr Johnson will stick to his negotiating deadline, especially if the path to a deal is visible.

The Times reported that Lord Frost has advised the PM that a deal could still be achieved.

But it will likely require a shift to daily negotiations to get it done in the coming weeks, giving both sides enough time to ratify and implement the accord before the end of the transition period.

A European ambassador told The Times: ‘The deadline is really a British deadline.

‘The heads of state and government will want to send a strong signal that they’re interested, that they want an agreement and that the negotiations should be intensified.’