Brussels has drawn up a plan to put the post-Brexit customs border in the Irish Sea in a move which sets it on a collision course with Theresa May.

The Prime Minister struck a deal with the EU in December which committed to keeping a soft border in Ireland as part of the divorce agreement.

They also drew up a ‘DUP clause’ which promised there would be ‘no new regulatory barriers’ – effectively no hard border –  between Northern Ireland and the rest of the UK.

But the European Commission has deleted this wording in the legal document putting the divorce deal down in writing, according to reports.

They have also drawn up  a last resort option which would see Northern Ireland stay under EU rules and regulations if no free trade deal is done.

This would mean Northern Ireland could accept the rules of the customs union, single  market and continue to be bound by EU courts after Brexit – even while the rest of the UK is not.

One senior EU diplomat who had seen the draft told the Financial Times it amounts to ‘a long way of explaining what a border looks like along the Irish Sea’.

The move will enrage the Prime Minister who has vowed there will be no barriers within the UK as a result of Brexit.

And it will face stiff opposition from the DUP – the Northern Ireland unionist party which is propping the Tories up in Government.

The Irish border is one of the trickiest questions abound up in the Brexit negotiations.

Currently the UK and Ireland are both in the EU so there is freedom of movement and goods and no hard border there – which help to underpin the Good Friday Agreement which brokered peace.

There are fears that new customs checks and border guards would reignite sectarian divisions and could spark fresh violence.

Under the divorce bill, Britain promised to maintain a soft border in Northern Ireland to avoid the peace being imperiled.

She promised Northern Ireland would maintain enough alignment with EU rules and regulations so that a hard border can be avoided.

British officials accused the EU of picking and choosing the bits they liked from the divorce deal to put into the treaty. 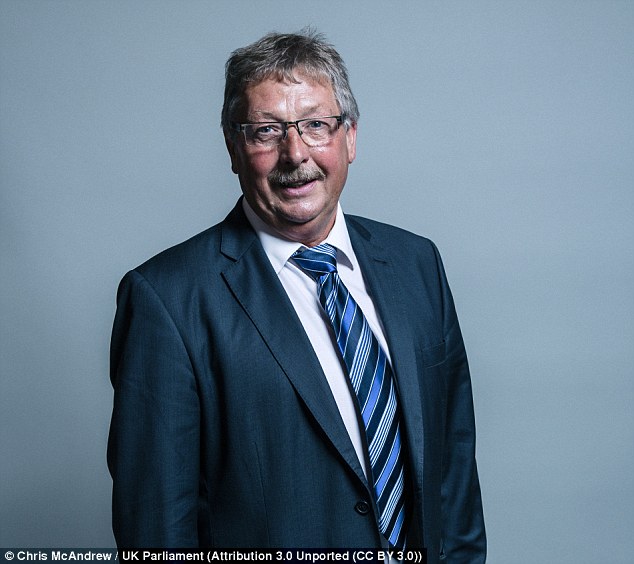 Sammy Wilson (file pic) a DUP MP, said the EU ‘chancing its arm’ over alignment would break the terms of the December agreement with the UK

A UK government official told the paper: ‘It is no surprise that the EU will continue to produce documents that push their negotiating position.

‘However it is important they accurately reflect the [December divorce deal] and include the full scope of the agreement, rather than simply the bits which best suit one side.’

British officials, in turn, see the commission as having a ‘tin-ear’ when it comes to Belfast politics.

Sammy Wilson, a DUP MP, said the EU ‘chancing its arm’ over alignment would break the terms of the December agreement with the UK.

He told the BBC: ‘It will not be simply the DUP who will be opposing, I think the government will have difficulties with this.’