The EU fights back with its OWN no deal doomsday plans: Juncker threatens to ground British flights and kick out UK expats if there is no Brexit deal as bitter standoff intensifies

Brussels today threatened to curb British flights and kick out UK ex-pats if there is no Brexit deal.

As the bitter standoff deepened, the EU released details of its plans for what happens if negotiations fail.

According to the plans, British airlines would be allowed to operate flights between the UK and the continent.

However, they would be barred from flying between EU airports, or operating services from Europe to the US.

The EU commission revealed the details as it announced it has started implementing its ‘no deal’ Contingency Action Plan.

Theresa May’s Cabinet yesterday triggered full-blown preparations, with billions of pounds being pumped into an effort to soften the blow of crashing out in March.

The Brussels blueprint covers 14 areas where UK withdrawal without a deal would create ‘major disruption for citizens and businesses’ in the remaining 27 EU states, including financial services, air transport and customs.

Publishing details of the plans today, the EU said: ‘The commission considers it essential and urgent to adopt these measures today to ensure that the necessary contingency measures can enter into application on 30 March 2019 in order to limit the most significant damage caused by a ‘no-deal’ scenario in these areas.

‘These measures will not – and cannot – mitigate the overall impact of a ‘no-deal’ scenario, nor do they in any way compensate for the lack of stakeholder preparedness or replicate the full benefits of EU membership or the terms of any transition period, as provided for in the withdrawal agreement.

‘They are limited to specific areas where it is absolutely necessary to protect the vital interests of the EU and where preparedness measures on their own are not sufficient.

‘As a rule, they will be temporary in nature, limited in scope and adopted unilaterally by the EU.’

The document made clear that air traffic between the EU and UK would be ‘interrupted’ from March if there is no Brexit deal.

It proposed a new regulation to ‘ensure temporarily, for 12 months, the provision of certain air services between the United Kingdom and the EU27 Member States, allowing air carriers from the United Kingdom to fly across the territory of the Union without landing, make stops in the territory of the Union for non-traffic purposes, and perform scheduled and non-scheduled international passenger and cargo air transport services’.

The paper says road haulage will be ‘severely restricted’ by no deal, and to ensure ‘basic connectivity’ the EU would grant a nine-month access for UK hauliers to the bloc.

The commission warned that UK nationals living in the bloc will be subject to its rules on the ‘right to enter, reside and work in the EU Member States’.

‘For short stays (up to 90 days in a 180 day-period) the Commission has adopted a proposal for a Regulation13 which exempts UK nationals from visa requirements, provided that all Union citizens are equally exempted from UK visa requirements,’ the document said.

‘Third-country nationals who want to reside in an EU Member State for more than 90 days for any purpose need to obtain a residence permit or a long-stay visa from the national migration authorities.’

However, the document does say expats who have been living in one EU state for five years or more should be granted residence.

‘Third country nationals who have been legal residents in one Member State for a period of five years must be granted, subject to certain conditions, longterm resident status in that Member State in accordance with Union rules.’

Industry group Airlines UK said: ‘This is yet further clarity that flights will continue between the UK and EU even in the event of a no-deal Brexit, as we have always said.

‘Combined with the excellent progress Government has made in concluding bilateral agreements with third countries – including the United States and Canada – passengers should have every confidence in booking holidays and trips for travel on 30 March and beyond.’ 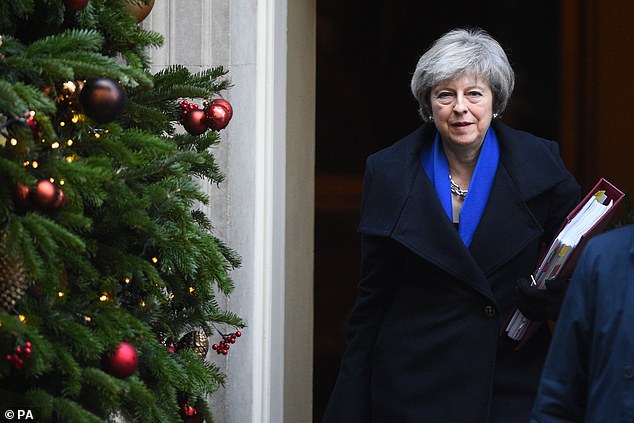