EU leaders have unveiled new migration rules that they hope will overhaul Europe’s failing migration policy and put an end to migrant camps in northern France.

Refugees arriving in the continent will have their biometric data and fingerprints taken and a decision on their future made within three months  giving them less time to disappear from the system.

Eurocrats hope these tough new measures will deter many from travelling through the bloc’s passport-free Shengen zone and reduce those who head to Calais and Dunkirk in the hope of using it as a springboard to Britain.

For the first time  countries can pay for migrants to be removed from Europe instead of taking in refugees.

Under the new plan if a country has a huge influx of migrants and believes it cannot take care of them, it can request the activation of the commission’s ‘compulsory solidarity mechanism’.

The EU has called for an overhaul of its broken migration system, saying compulsory rules are needed across the bloc to address the crisis after years of division. Pictured a refugee camp in Moria, Lesbos

All states will then be called upon to contribute according to their population numbers and economic strength.

The move is an attempt to create a uniformed policy across the bloc after years of bitter wrangling about the refugee crisis.

But campaigners criticised the plan for appearing to favour hardline Eastern European states.

Ylva Johaansson, EU Commissioner for Home Affairs said: ‘There will be quotas, but you can choose whether you will contribute to your quota via relocation, or return sponsorship or a mix of those.’

A country would take financial and political responsibility for ensuring a number of illegal migrants were returned home and have eight months to do it. But if an EU country fails to return migrants to their country of origin within eight months, it must take them in.

Each state would receive 10,000 euros per adult taken in, funded from the bloc’s budget.

The pact, backed by Germany, would need all 27 EU members to sign up to it, with member states agreeing to either take in migrants or take charge of sending back those who are refused asylum.

Britain will not be subjected to the proposed changes due to its departure from the EU.

It comes after growing concerns about the current situation, with many refugees making dangerous crossings from the Middle East and Africa into countries which are unwilling to house them.

European Commission head Ursula von der Leyen said on Wednesday that the recent fire in the migrant camp on the Greek island Lesbos was ‘a stark reminder’ of the need to act.

‘Migration is complex, the old system to deal with it in Europe no longer works,’ von der Leyen said in a statement to the media as the Commission presented a new proposal.

‘We need to find sustainable solutions on migration,’ she said. ‘Moria is a stark reminder,’ she said of the Lesbos fire.

Endless rows over where to locate refugees and migrants have caused bad blood between the Mediterranean-shore countries, the reluctant easterners, and the richer northern states where many of the new arrivals aspire to live.

In 2015 more than a million people made it to Europe, overwhelming security and welfare networks, and increasing far-right and anti-EU sentiment. 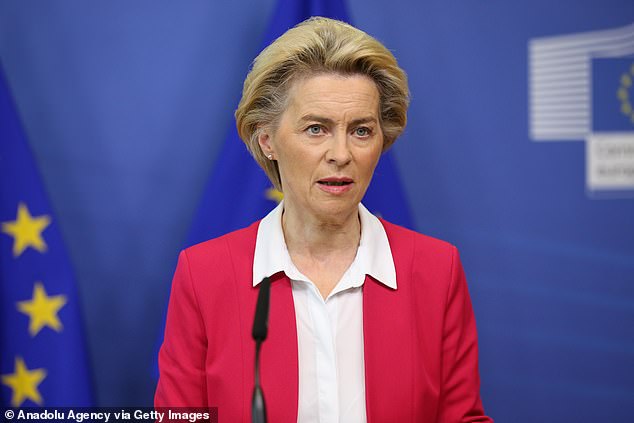 ‘More than 400’ migrants overwhelm UK Border Force on one day

Migrants escorted by unscrupulous people traffickers set sail from Dunkirk at dawn on Tuesday – with an estimated 400 landing in England.

Photos showed dozens of migrants embarking from Gravelines beach in the twilight and their smugglers scurrying back up the dunes after seeing them off.

At least 27 boats were brought into the marina in Dover later on Tuesday after a few days of relative quiet due to high seas in the world’s busiest shipping lane.

It comes amid fears that record numbers of migrants are making the 20-mile dash across the waves before the winter brings rougher seas.

More than 6,500 migrants have successfully landed so far this year, with September already the busiest month so far, despite there being eight more days to go.

The current single-day record for migrant crossings is 416, set on September 2.

But the bloc’s top migration official said the crisis was over, with the EU now receiving some 1.5 million net new foreigners coming legally to live and work per year, compared to only 140,000 asylum seekers arriving irregularly.

‘We need these people,’ said Swedish EU Home Affairs Commissioner, Ylva Johansson. ‘Managing migration is not about finding a perfect solution but a solution acceptable to all.’

The executive European Commission’s plans to overhaul its defunct system include scratching a rule that the first EU country of arrival be responsible for asylum requests, which put too much burden on Mediterranean nations.

Under the new proposal, those arriving would be assigned to specific countries based on family links, history of education or work, or having a visa issued by a member state.

In the 400-page proposals spanning five different pan-EU laws, Johansson put emphasis on sending back those who fail to win asylum. ‘It’s necessary to have the acceptance of EU citizens to relocate (host) those who have the right to stay to be able to send back those who are not eligible,’ she said.

The plan, sure to stir up heated disputes, would also aim to open up more legal routes for refugees and migrants, and work more closely with countries hosting and managing people before they reach Europe.

It would also put EU countries with external borders under closer monitoring to ensure they do not violate the law after multiple reports of pushbacks in Hungary, Croatia, Greece or Malta.

Under the plan, people rescued in the sea would have to be relocated in the bloc – rather than sent back – and the Commission recommended that member states do not criminalise charities involved in such rescues. 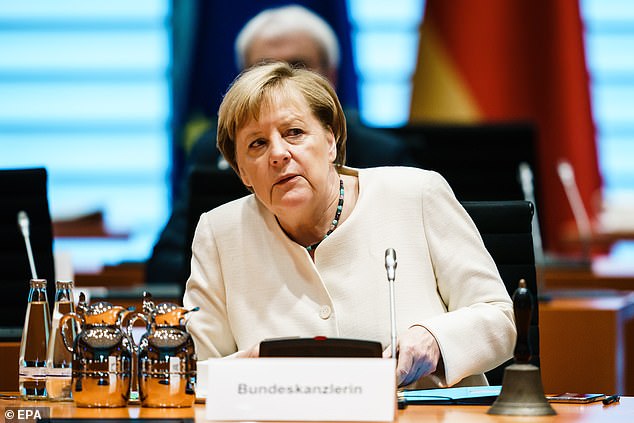 Despite having German Chancellor Angela Merkel as the driving force behind it, the plan faces an uphill battle

At times of regular immigration, all EU states would be obliged to help under the new idea of ‘mandatory solidarity’ by relocating or returning people, or offering material assistance on the ground in arrival countries.

If, however, a country were falling under major pressure, it could seek to activate a crisis mechanism under which its EU peers would be obliged to take people in or send them back.

The complex system would eventually lead to each EU country having to take in some refugees.

Despite having German Chancellor Angela Merkel as the driving force behind it, the plan faces an uphill battle.

The Commission said all elements should be in place from 2023. 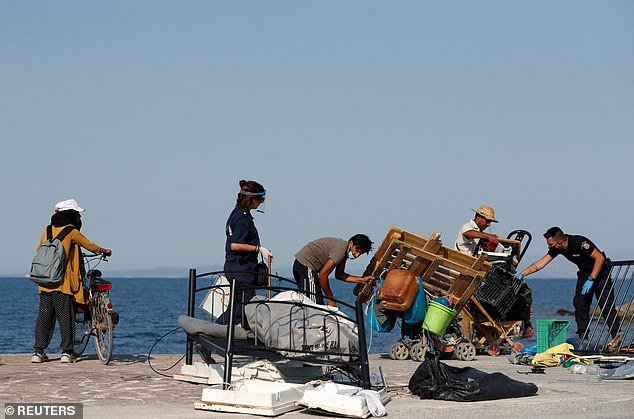 Under the plan, people rescued in the sea would have to be relocated in the bloc – rather than sent back

After opening Germany’s doors to Syrian refugees back in 2015, Merkel suffered electoral setbacks as the far right surged on anti-immigration sentiment.

But in a sign of the changing mood, German mayors offered this month to take in refugees after an overcrowded camp on the Greek island of Lesbos burnt to the ground. Protesters took to the streets in many German cities chanting ‘We have space!’.