EU will react ‘swiftly’ to any Trump trade curbs

The European Union has said that if US president Donald Trump initiates unfair trade measures against the 28-nation bloc, it would react ‘swiftly and appropriately’.

Trump said in his interview with Piers Morgan yesterday that he was annoyed with EU trade policy, claiming  the US cannot sufficiently export to the union.

He said his problems with the EU ‘may morph into something very big’ from a trade standpoint.

Peeved: US President Donald Trump said in his interview with Piers Morgan yesterday that he was annoyed with EU trade policy

EU spokesman Margaritis Schinas retorted that ‘while trade has to be open and fair, it also has to be rules-based’.

Mr Schinas added: ‘The EU stands ready to react swiftly and appropriately in case our exports are affected by any restrictive trade measure from the United States.’

Trump made the comments as he told Piers Morgan his views on the Brexit negotiations, criticizing the way Prime Minister Theresa May had been negotiating Britain’s way out of the EU.

‘I think I would have said that the European Union is not cracked up to what it’s supposed to be. 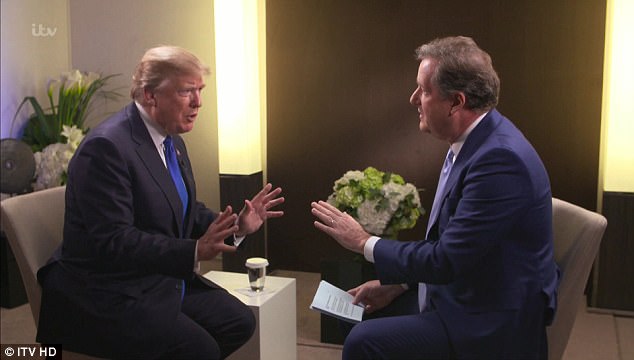 Critique: Trump told Morgan that had he been in Prime Minister Theresa May’s shoes, he would be negotiating Brexit differently

‘And I would have taken a tougher stand in getting out. You know, I have a lot of problems with the European Union. I’m representing the United States, it’s a very unfair situation. We cannot get our product in. It’s very, very tough.

‘And yet they send their product to us – no taxes, very little taxes. It’s very unfair.

‘I’ve had a lot of problems with European Union, and it may morph into something very big from that standpoint, from a trade standpoint. The European Union has treated the United States very unfairly when it comes to trade.

‘They’re not the only one, by the way. I could name many countries and places that do. But the European Union has been very, very unfair to the United States. And I think it will turn out to be very much to their detriment.’

Trump gave the wide-ranging interview last Thursday on the sidelines of the World Economic Forum in Davos, where he took his ‘America First’ agenda to the global business elite.

In a speech Friday he told the forum that his mantra ‘does not mean America alone’ and hinted that the US could rejoin the Trans-Pacific Partnership, a deal he withdrew from a year ago.

A bipartisan US trade panel blocked that decision on Friday but the dispute, which has inflamed relations with Ottawa — and to a lesser degree Britain, where Bombardier has a large workforce — could be a harbinger for the EU.