A great-great-grandmother who turned 102 years old on Tuesday said a daily dose of chocolate has kept her feeling fresh, healthy and happy.

Eunice Modlin, of Boonville, Indiana, said her secret to living a long healthy life is eating two pieces of dark chocolate every day.

In recent years, chocolate has been increasingly considered a health food due to studies linking the snack to many health benefits, including a reduced risk of developing cardiovascular disease, cancer and diabetes.

But some experts warn chocolate may not be the ‘key’ to Eunice’s long life given other life-extending factors, such as her never drinking alcohol or smoking cigarettes. 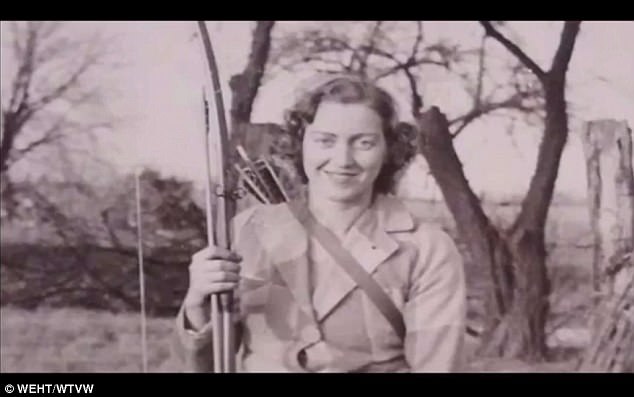 The great-great-grandmother took up archery, a sport involving bows and arrows, when she was in her 20s

‘There are so many other factors to her long life and chocolate isn’t the only one,’ nutritionist Vanessa Rissetto, who specializes in weight loss and medical nutrition therapy, told Daily Mail Online. ‘Genes, her diet in general… are probably the main reasons.’

When the centenarian was in her 20s, she took up archery, a sport involving bows and arrows, and became known for her archery skills.

At 102 years old, Eunice has lived through many tough times, including the Great Depression and World War II and has shown now signs of stopping.

‘The great depression, the oppression. She just always went with the time, and always been steady as a rock for myself,’ Tammy Gentry told WEHT/WTVW at Eunice’s 101st birthday party last year.

Eunice, who eats a steady diet of vegetables that are grown in her garden, isn’t the only person in her family who’s lived a long life, her brother is 101 years old.

Tammy told Today that the 102-year-old woman is still in good health, despite that fact she’s losing her eyesight, and a daily dose of chocolate may have something to do with that.

What is the secret to a long life: Other centenarians reveal tips to living so long

Betty White, 95, credits her diet of french fries, hot dogs and vodka to her long life.

Nabi Tajima, 117,  said her secret to living a long life was ‘eating delicious things’ such as ramen noodles and beef stew.

Emma Morano, who died last year at the age of 117, said her secret to a long life was eating raw eggs and avoiding men.

Susannah Mushatt Jones, who died at age 116 in 2016, said bacon was her secret for living so long.

Another study published in the journal Appetite in 2016 found people who consume chocolate at least once a week had a lower risk of diabetes five years later.

Chocolate is a good source of antioxidants. The antioxidant and anti-inflammatory power of chocolate is thought to come from a class of plant nutrients found in cocoa beans called flavonoids, Rissetto said.

However, depending on how a chocolate bar is made, the ingredients could counteract some of the sweet treat’s supposed health benefits.

‘Not all chocolate is created equal,’ Rissetto explained. ‘Dark chocolate has more [flavonoids] than milk chocolate, and white chocolate – which does not actually contain chocolate – is not a good source of flavonoids.’

Chocolate is also high in fat, so people can only reap its benefits in moderation. In other words, people who consume pounds of chocolate per day will only end up with clogged arteries.

Eunice isn’t the first person to reveal her secret to a longer life.

Ninety-five-year-old Betty White attributes her long life to a diet of hot dogs, french fries and a nightly glass of vodka.