A top-speed of 19mph and a 97m sprint from box to box: Fans purr over Cristiano Ronaldo’s ‘absolutely sensational’ Portugal opener against Germany… with 36-year-old showing no signs of slowing down

Cristiano Ronaldo sent fans into a frenzy as he rolled back the years with his stunning opening goal against Portugal on Saturday.

The 36-year-old showed no signs of slowing down when he started, and finished, a quick, counter-attacking move to break the deadlock inside the Allianz Arena.

With Germany dominating the proceeding from the get go, it looked like it would take a moment of magic for Portugal to strike against the run of play. 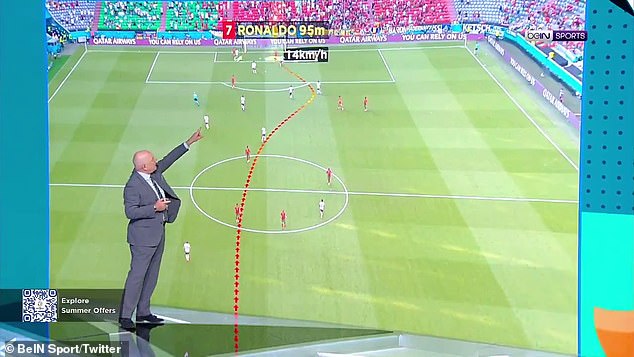 And fans got exactly that when Ronaldo headed the ball out of his own box at a Germany corner, made a lung-busting run down to the opposite end in 14.2 seconds to tap the ball into Manuel Neuer’s empty net – his first ever goal against the Germans.

From box to box, Ronaldo clocked in a staggering top speed of 19mph before using his unmatched positional awareness to be in the right place at the right time to receive the ball from Diogo Jota.

While Ronaldo ended up on the losing side, with Germany fighting back to emphatically win the contest 4-2, fans were left in awe of the Juventus superstar, labelling him as ‘absolutely sensational’. 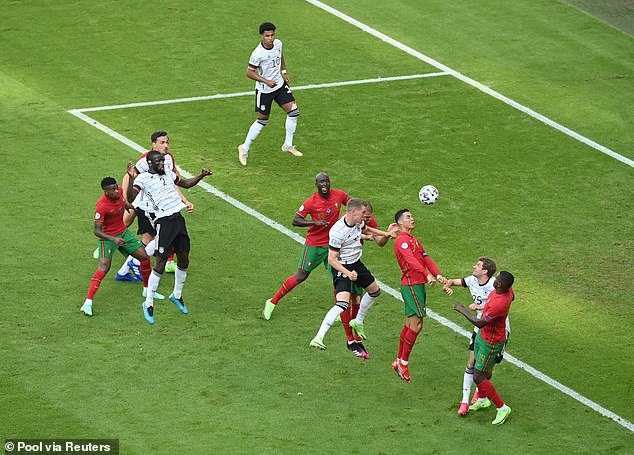 From a Germany corner, Ronaldo headed the ball clear to start a counter-attack 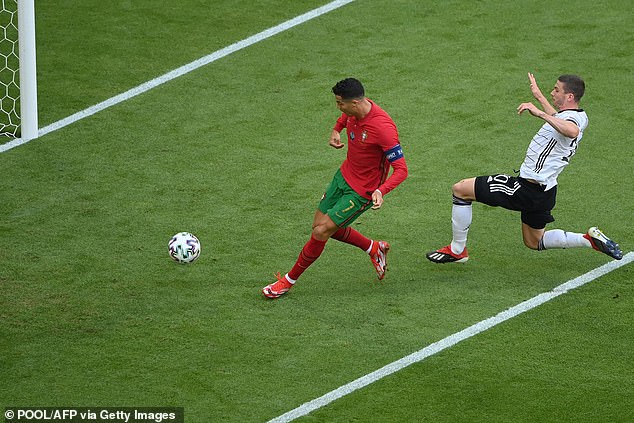 After sprinting up the pitch in 14.2 seconds, he found himself in the right place at the right time 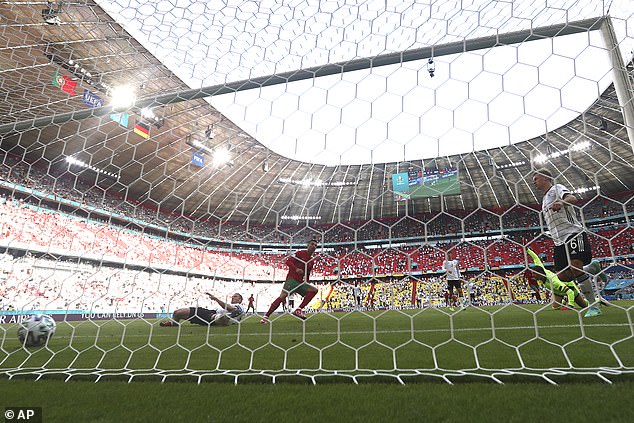 Many reacting the goal accused Ronaldo of being a ‘tap-in merchant’ while others defended the Portuguese talisman for his top effort before scoring.

‘People call this a tap in but look at the work he had to put in to get in that position. Against Germany!’ one fan on Twitter said.

Another agreed, saying: ‘A lot of people will say that’s just a tap in from Cristiano Ronaldo, but he deserves so much credit there.

‘CR7 won the defensive header to clear the ball, sprinted down the other end of the pitch and made a great run to open up space for Jota. As we always say – a machine.’ 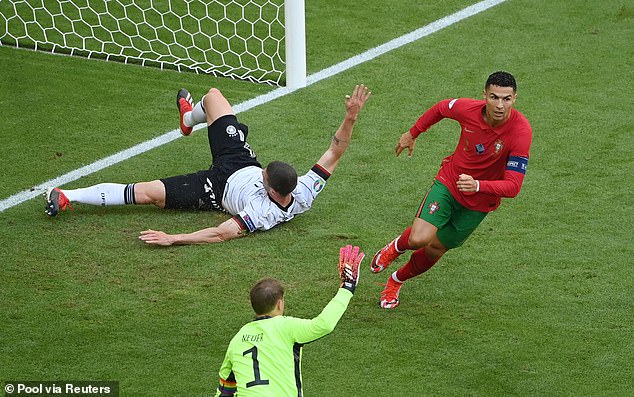 One fan added: ‘Ronaldo GOATing it up again! What a run and he’s always in the right place at the right time.’

Another Twitter user simply called the veteran forward ‘absolutely sensational’ after watching his goal back.

Following Ronaldo’s opener, Joachim Low’s, who is leaving the national team after 15 years in charge next month, side came roaring back to turn the game on it’s head.

The Germans will have Robin Gosens to thank for a large part of their comeback, who came to their rescue as they forced two own goals from Manchester City’s Ruben Dias and Raphael Guerreiro.

Consequently, Portugal became the first European nation to concede two own goals in a single match at a major tournament and there have now already been more own goals in this tournament than at any other European Championship. 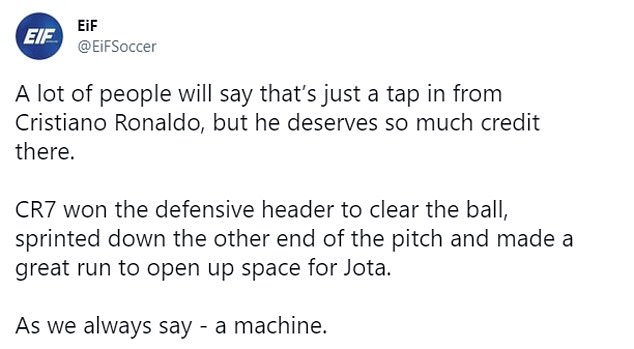 Ronaldo’s athleticism left fans purring, where he was hailed as ‘ absolutely sensational’

But Germany’s scoring was not over, with Kai Havertz and Gosens doubling their tally to leave Portugal looking ordinary, even with Diogo Jota’s consolation.

After their opening Group F defeat to France, Germany had to make an impact and were the better side throughout, having a brilliantly-converted early Gosens goal cancelled out as Serge Gnabry was flagged offside for attempting, but failing, to reach Mathias Ginter’s cross.

Victory appeared to be assured, but Liverpool forward Jota’s close-range finish from Ronaldo’s cut-back made it 4-2 and Germany’s nerves were shaken further when substitute Renato Sanches rattled a post from distance.