New footage suggests Gareth Southgate chose Jordan Pickford and Kalvin Phillips to take England’s next two penalties after Bukayo Saka in the Euro 2020 shoot-out loss to Italy… so where were Jack Grealish and Raheem Sterling on the list?

Fresh footage of Gareth Southgate preparing England’s penalty takers suggests Jordan Pickford and Kalvin Phillips were in line to take the sixth and seventh spot-kicks against Italy on Sunday.

The clip shows Southgate briefing England’s penalty takers in Marcus Rashford, Jadon Sancho and Bukayo Saka ahead of the Euro 2020 final shoot-out before then heading towards Pickford followed by Phillips.

Sportsmail reported in late June that goalkeeper Pickford was being lined up as a penalty taker for England and was even being considered for one of the earlier spot-kicks. 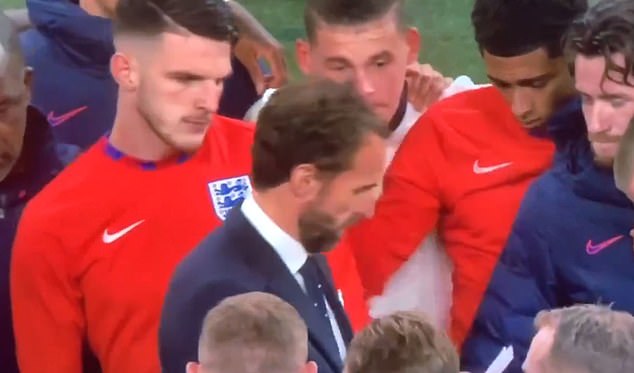 After speaking to Pickford, Southgate went over to Kalvin Phillips to select him for a penalty

Gareth going around his choices from Rashford onwards.
3 = Rashford
4 = Sancho
5 = Saka
6 = Pickford
7 = Phillips
Then he points to someone and says “eight”.

Beggars belief how Pickford is taking one before other established outfield players. pic.twitter.com/WnpsiCwuSB

Roy Keane and Jose Mourinho have led the criticism of Southgate’s order of penalty takers, questioning why players with more experience than 19-year-old Saka, such as Raheem Sterling and Jack Grealish, weren’t taking the fifth kick.

‘If you’re Grealish or Sterling, you can’t have a young kid step up in front of you,’ the former Republic of Ireland and Manchester United captain Keane told ITV.

‘You can’t sit there and say “I see a 19-year-old kid walk in front of me, when I’ve played a lot more games, a lot more experience…” and Sterling, who has won trophies.

‘I’m not saying he (Saka) wasn’t prepared, he might have been (penalty taker) six or seven, (but) you can’t sit there. It must be hard to take. You’ve got to get in front of this kid and say “listen, I’m gonna step up in front of you”.’

But according to this footage, Grealish and Sterling weren’t down to take a penalty until No 8 at the earliest. Luke Shaw was also on the pitch and was still to take a spot-kick.

On Monday morning, Grealish took to Twitter to refute suggestions that he had not wanted to take a penalty.

Grealish wrote: ‘I said I wanted to take one!!!! The gaffer has made so many right decisions through this tournament and he did tonight!

‘But I won’t have people say that I didn’t want to take a peno when I said I will…’. 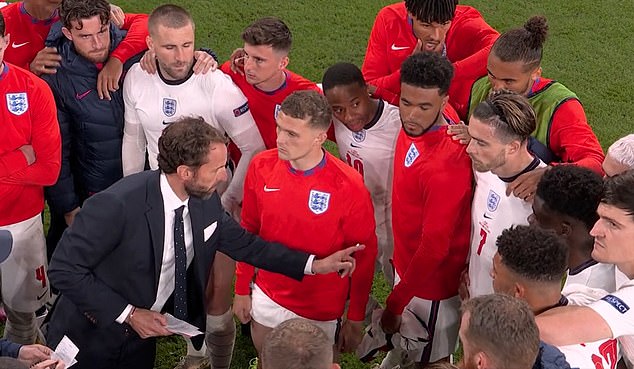 Pickford, meanwhile, scored a penalty against Switzerland two years ago and Phillips had said how the No 1 had impressed with his dead ball skills in training.

‘He’s a very clean striker of the ball,’ Phillips said. ‘It makes it a lot easier when you have a keeper who could probably score a free-kick as well as a penalty.’

Southgate and his assistant, Steve Holland, have overseen a meticulous approach to England’s preparations for penalties and have won two shoot-outs under their guidance.

England practiced penalties in every session from September 2020 – when international football returned from the Covid-19 enforced absence – and even made players replicate the walk from the halfway line. 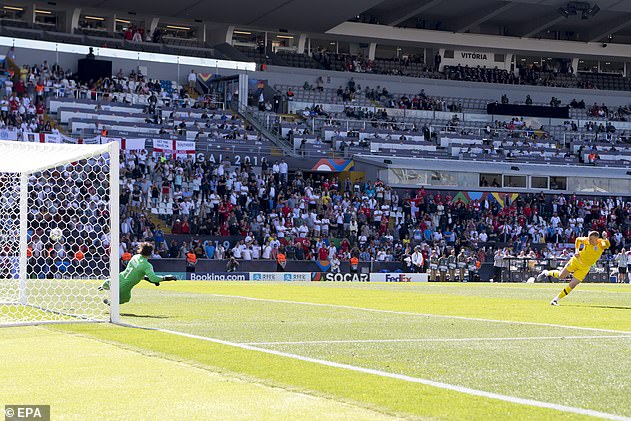 ‘We have a process,’ Southgate explained before the Germany match at Euro 2020. ‘We’ve won our last two shoot-outs, so we had a process that worked for us through that preparation and we followed that same process.

‘There’s a little bit more focus on it this week but we don’t start that this week because that would be too late and also we didn’t want to make a bigger thing of it than it is.

‘We created a process that works for us. We think the players understand that and we’ll be well prepared if it comes to that moment.’