‘If that’s a red card then football has gone. Shocking decision’: Football fans blast referee Ovidiu Hategan on social media after he harshly sends off Ethan Ampadu for a late stamp on Federico Bernardeschi during Wales’ Euro 2020 clash vs Italy

Fans reacted with fury after Ethan Ampadu was sent off for Wales in the second half against Italy.

The 20-year-old was shown a straight red card for a late challenge on Federico Bernardeschi, as Wales’ task went from extremely difficult to almost impossible.

But while VAR checked the incident and decided to stay with the decision of the referee, many on social media felt Ampadu had been hard done by. 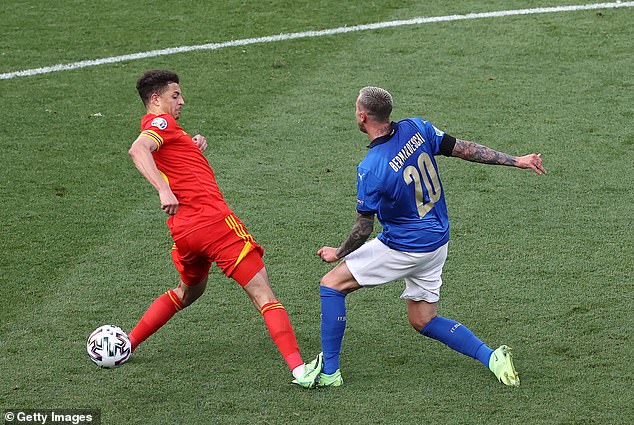 @amh0910 posted: ‘Peter Walton agrees with the red card so you know it’s a poor decision.’

@OLILFC11 tweeted: ‘That’s such a harsh red card. Late challenge, but was top of the foot. Not really reckless. VAR never going to overturn that tho after the ref gave it.’

‘Late by Ampadu, but we’ve seen that tackle 50 times in this tournament and none of them have been a red card,’ @Ashleyrose66 posted.

@martyndennison said: ‘If that’s a red card then football has gone. Shocking decision.’

‘How can that be a red, when David Alba got a yellow for the same challenge. The only reason I can think of is the double jeopardy rule, but very harsh on Ethan Ampadu that,’ @JakeMurphyMedia tweeted.