Euro 2020: Italy and Austria will NOT be able to train at Wembley before their last-16 tie

Italy and Austria will NOT be able to train at Wembley before their Euro 2020 last-16 tie due to concerns over the pitch, with five matches still to be played on it and wet weather due

Italy and Austria have been blocked from training at Wembley ahead of their Euro 2020 last-16 tie due to concerns over the playing surface for the rest of the competition.

The match is the first of five fixtures still to take place at the national stadium, which has already hosted all three of England’s group games.

Three days after Italy and Austria meet, England take on Germany in one of the most-eagerly anticipated matches of the tournament so far. 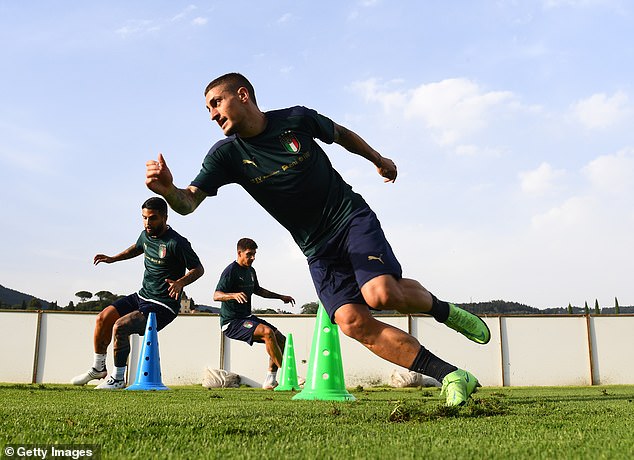 It is customary for teams to train at the venue the night before a UEFA fixture but with two games scheduled in the space of four days, as well as both semi-finals and the final, the authorities have opted for a cautious approach.

The decision was taken on Thursday morning, following the wet weather and the prospect of more in the days ahead.

Italy are now planning to train on Friday morning at their Coverciano headquarters near Florence before flying to Luton Airport in the afternoon.

Roberto Mancini’s side have not played at Wembley since drawing 1-1 with England in a friendly in March 2018, part of England’s preparations for the World Cup.