The Juventus team-mates — combined age 70 — were at their most cunning during the 2-1 victory over Belgium to set up tonight’s semi-final against Spain.

Chiellini was returning after injuring a flexor muscle in the opening game of the tournament, but his partnership with Bonucci was key in resisting Belgium’s push for an equaliser. 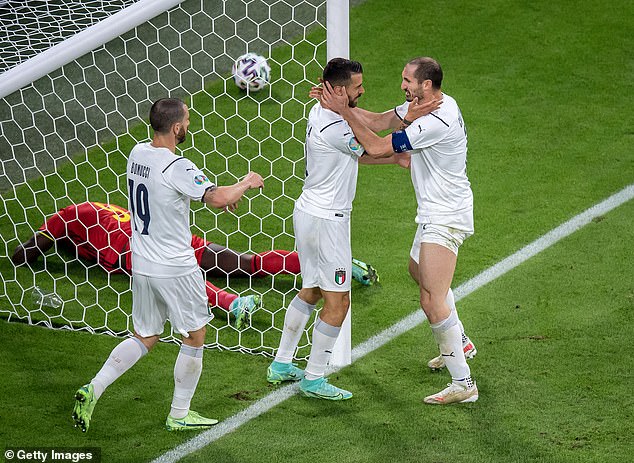 Bonucci has stuck up for his Juventus team-mate in recent days. Morata was poor in the quarter-final and came off after 54 minutes. You do not know what you will get from him. The same cannot be said of Bonucci. The veteran centre back has been outstanding at the Euros and you’d back him to get the better of his friend in this game.

This should be fascinating — two ball-players who will be tasked with picking dangerous passes.  Pedri, 18, has been a revelation, but we have long known of Verratti’s quality. It could well be a moment of inspiration from one of them that decides this match.

Both players were criticised for their quarter-final displays. Roberto Mancini defended his striker, saying the ‘most maligned’ players can often be the match-winners.  But Laporte has worries of his own after his error led to Switzerland’s goal in the last game. Whose confidence will hold up best?

‘They are the best centre-back partnership in world football, we have heard that for many years,’ said Mancini.

‘Their strength is that they want to prove that every match. We hope Giorgio can now withstand three matches in a short period.’

Bonucci, speaking at Wembley on Monday, was also pressed on the understanding the pair have developed during 11 years together for club and country.

‘We know each other’s game inside out,’ he said. ‘It comes very naturally. You don’t have to think about the other things you normally would when playing with someone else.

‘We can share the workload and it allows us to both be leaders — that is critical.’

Mancini, meanwhile, called it ‘very unfair’ that Wembley will not be made up of thousands of Italian and Spanish supporters because of Covid-19 travel restrictions.

But those at home in Italy believe their team is destined for the final, a confidence Mancini welcomed.

‘I hope you’re absolutely right,’ he said when told that Italian fans believe they will repeat their Euro 2016 victory over Spain.

‘But we know it won’t be easy. It’s very unlikely you find an easy semi-final opponent.

‘Spain have dominated world football and have been an incredible team for many years.’

Bonucci was also cautious when it came to writing off Italy’s opponents.

‘Spain have been much maligned through Euro 2020,’ he said.

‘But their manager Luis Enrique has protected them. He has been a lightning rod. It has brought them together. They have real mental strength.’