Euro 2020: Spain still have work to do to convince fans they have a genuine shot at glory

Spain were overcome with relief when a rout over Slovakia spared their blushes in Euro 2020 group stages… but with France lined up for a quarter-final clash, Luis Enrique and his players have work to do to convince fans they have a genuine shot at glory

Trust an ex-player to take the air out of the celebratory balloon. While Spain were still celebrating dishing out the biggest victory of the Euros so far, former Spain and Valencia goalkeeper Santi Canizares brought everyone down to earth.

‘Up until now this is like the Eurovision,’ he said. ‘Everyone sings.’ His point was that after an up and down group stage, not just for Spain but for many of the big teams, the tournament now starts for real and the 5-0 against Slovakia in many ways counts for nothing.

‘I still think we won’t get past the quarter-finals,’ Canizares added. And it’s true that the other thing keeping Spain grounded is the prospect of meeting tournament favourites France in the quarter-finals if both sides progress from the last-16. 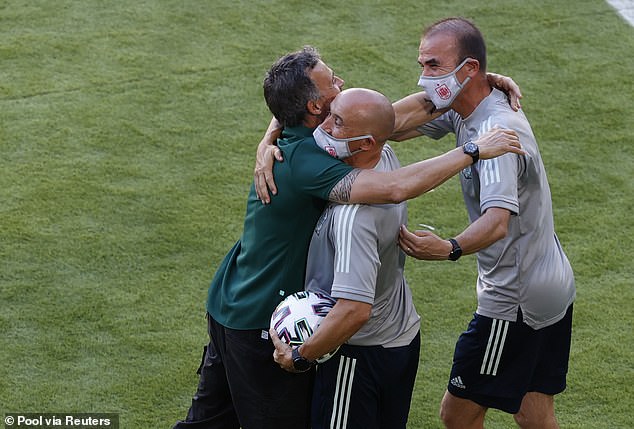 ‘We were in the dirt so this seems great, but we are just where we ought to be, no more, no less’ said Marca’s Roberto Palomar. Spain know it will still be hard to come away from this Euros with the trophy in their hands.

It wasn’t all reality checks and rationality. And Spain coach Luis Enrique is happy for people to get carried away. He knows it will not transfer to his players because now the squad have to leave Seville and their Madrid training base and head to Copenhagen for the next round.

He tried to set the mood with his choice of attire for his post-match interview on Wednesday night. He donned a Spain ’82 t-shirt with the famous ‘Naranjito’ (little orange) tournament mascot emblazoned on it.

The World Cup in 1982 was the last tournament Spain hosted. It didn’t go particularly well for them because they were beaten by Northern Ireland and held by Honduras in the first group stage and were then beaten by West Germany and held by England in the second group stage, but never mind that: Naranjito still taps into a moment when Spain felt good about the national team – something that had been missing from the opening of this tournament. 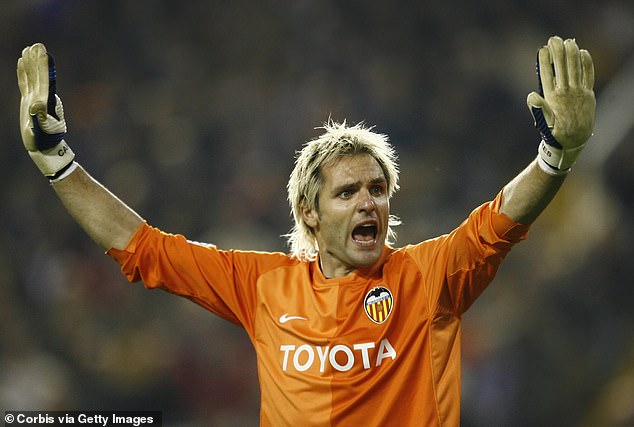 Santi Canizares served Spain a reality check, claiming they aren’t likely to get past the quarters

That has changed now. Luis Enrique said after Wednesday night’s win: ‘Tell any team finishing top of their group that they have to face Spain and they would not be too happy.’ Asked if that meant Spain were now one of the big favourites, he replied: ‘I never said that but we are one of the six or eight teams that can win it, yes.’

The scenes at the end of the game against Slovakia were like those of a team qualifying for a major tournament. There was a lap of honour and players had their children out on the pitch with them. There is a communion with the people now, albeit one that only serves to send the players off into the knockout stages in the right frame of mind.

The mood is also one of relief. Busquets said through tears on Wednesday night: ‘I had a really bad time with 10 days at home. I didn’t know if I was going to be able to come back. Now I’m ready for anything.

‘This is a big boost for all of us, for the players and for the supporters. I think we all needed this.’ 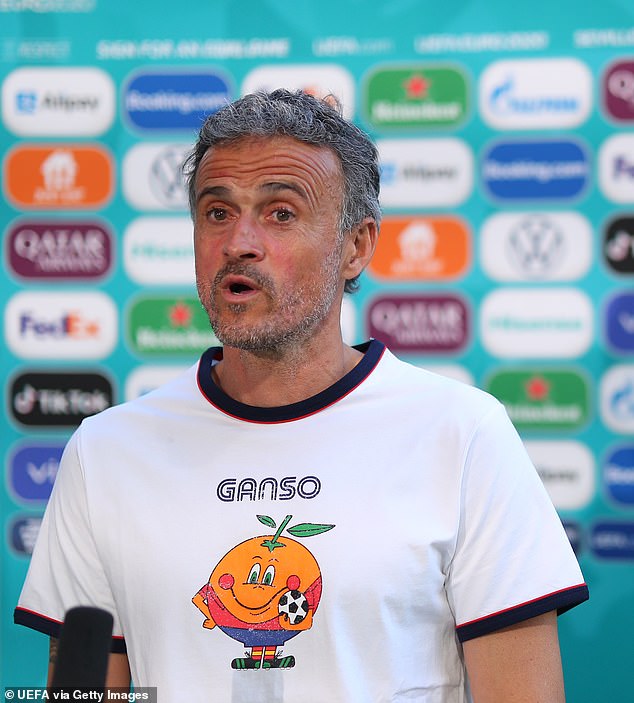 Busquets, who was referring to his pre-tournament Covid positive that meant he missed the first two games, was given the man of the match award. It could easily have gone to the brilliant Pablo Sarabia. And Pedri and Cesar Azpilicueta were not far behind the PSG winger.

Sarabia had scored one and played a big part in two goals. Pedri had played key passes in the build up to three of the goals. And Azpilicueta had been solid at right back and constructive in possession.

These were the selection decisions made by Luis Enrique and they had all come off. Sarabia was his big call prior to the tournament because few Spain fans understood why the Ligue 1 player was included in the 24. 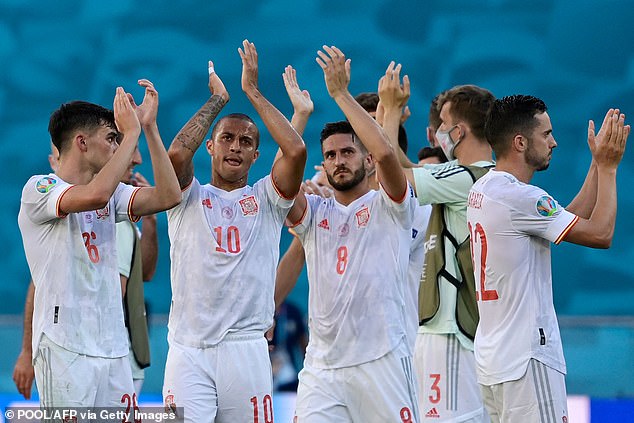 ‘The Hand of Lucho’ was the headline on the front page of Barcelona based El Mundo Deportivo. If Barca fans are now behind Spain because of Luis Enrique then support really is universal.

All the former Barcelona coach needs to do now is incorporate Marcos Llorente into his team. The fact that Spain won so well without him doesn’t change the fact that the Atletico Madrid midfielder weighed in with 13 goals and 12 assists last season as his team won LaLiga. He ought to be accommodated somehow.

That’s a selection dilemma for Monday. Spain now have a couple of days to bask in the glory of such an emphatic win. Their heads are in the clouds but Canizares’ words will serve to keep their feet rooted to the ground. 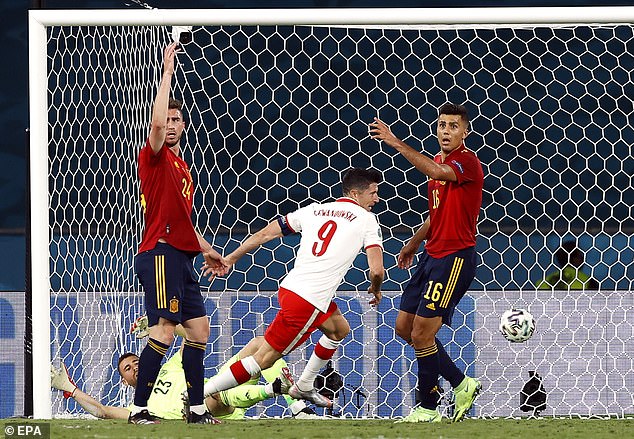 Spain got off to a dismal start at Euros, drawing their opening two games with one goal scored