Eurocrat criticises British press over its ‘spiced up’ Brexit coverage

A senior Eurocrat sparked fury yesterday after she attacked the British Press over its Brexit coverage and suggested a clampdown could be introduced.

Vera Jourova made the apparent threat after the front page of a newspaper mocked-up EU leaders as Prohibition-era gangsters following their ambush of Theresa May at the Salzburg summit last week.

The Sun’s article was singled out by the EU’s justice commissioner, before she went on to claim Brexit is the ‘best example’ of the media causing ‘division’ rather than ‘building dialogue’.

In a speech in Vienna, Mrs Jourova, 54, said: ‘Almost daily we could find examples of stories that are spiced up to identify an enemy, that paint a picture black and white’. Pictured: Mrs Jourova speaking in Brussels

In a speech in Vienna, Mrs Jourova, 54, said: ‘Almost daily we could find examples of stories that are spiced up to identify an enemy, that paint a picture black and white.

‘The traditional media are under enormous pressure from the digital world, they lose readership and advertising revenue, they have to cut staff which means less fact-checking, less quality reporting. And I would advocate a European approach to media based on quality and smart regulation, if needed.’ But critics hit out at her comments.

‘They [the EU] are not democratic instinctively. They are increasingly trying to crack down on what they think are extreme views, except these views can often be in the mainstream.

‘They have a view of the world where they are the shining light and everyone else is wayward.

‘They have also missed the humour in it, which shows how detached they are from the world. It’s dangerous.’

After the Salzburg summit where Mrs May’s blueprint for a post-Brexit relationship was trashed by Brussels, The Sun was one of a number of newspapers which criticised EU leaders. French president Emmanuel Macron had accused leading Brexiteers of being ‘liars’ for telling British voters it would be easy to leave the EU. 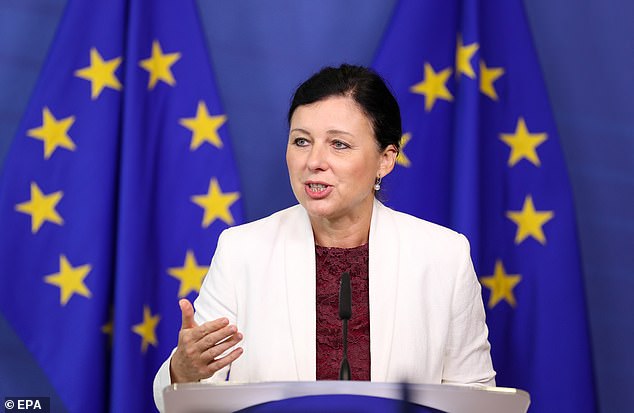 Mrs Jourova said that she would ‘advocate a European approach to media based on quality and smart regulation’ during her speech in Vienna. Pictured: Mrs Jourova speaking in Brussels

The Sun’s front page included Mr Macron and EU Council chief Donald Tusk mocked up as gangsters carrying Tommy guns under the headline ‘EU Dirty Rats’. Mrs Jourova also criticised a front page of the Daily Mail from November 2016 which featured the pictures of three judges alongside the headline ‘Enemies of the People’.

But defending journalists’ coverage of Brexit, Amjad Bashir, the Tory MEP for Yorkshire and the Humber, said: ‘Commissioners should not be trying to shackle the Press.’

A spokesman for Mrs Jourova denied she was threatening a crackdown on freedom of speech, pointing to a section in which she said the ‘[media] do a job that is uncomfortable for us, but we have to respect the crucial role they play for democracy’.