‘Europe cannot fail twice on migration’, EU Commission warns, as it urges countries to ensure there is no repeat of the 2015 crisis when a million exiles entered the continent

Europe cannot ‘fail twice on migration’ and must avoid a repeat of the 2015 crisis, the EU Commission has warned today.

Vice-President Margaritis Schinas said today the bloc cannot have similar scenes to those seen five years ago, when more than a million exiles fleeing wars, persecution or poverty flooded the continent.

The huge influx caused significant political rifts within the European Union with some states in the border-free Schengen area putting up fences and reimposing frontier controls.

Migrants disembark from a vessel after their arrival from the Turkish coast to the northeastern Greek island of Lesbos, in November 2015, when around 5,000 a day were reaching Europe along the so-called Balkan migrant route

‘Europe cannot fail twice on migration,’ Schinas said at a press conference after a meeting of ministers from 18 EU and Western Balkan nations.

‘This is the moment, now,’ Schinas said, referring to a long-awaited and repeatedly postponed proposal for the reform of EU migration and asylum policy, which the European Commission is expected to unveil in September.

Schinas said the fact that the bloc had this week signed off on a giant coronavirus economic recovery plan had cleared the way for progress on other issues.

‘We didn’t want to contaminate the discussions on the recovery plan with another difficult file on migration,’ Schinas said.

However, at the end of the two-day conference held in Vienna it was clear that many aspects of any future deal remain contentious.

Greek representatives had made clear before the meeting that they and other southern European states wanted compulsory distribution of refugees across the EU to be on the agenda.

Countries such as Poland, Hungary, the Czech Republic and Slovakia have been vehemently opposed to this.

German Interior Minister Horst Seehofer, whose country currently holds the EU’s rotating presidency, stressed the need for tighter procedures to decide at the EU’s external borders who was eligible for refugee status. 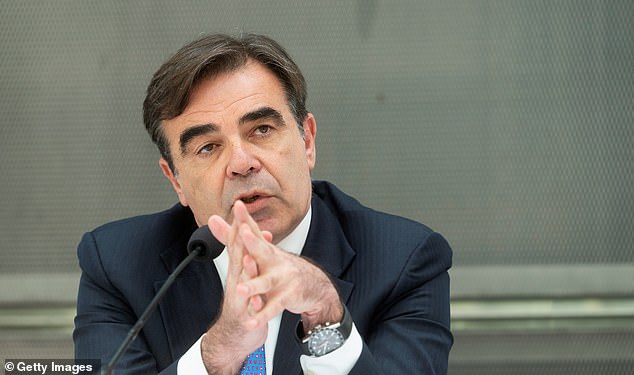 Vice-President Margaritis Schinas, pictured in Vienna today, said the bloc cannot have similar scenes to those seen five years ago, when more than a million exiles fleeing fleeing wars, persecution or poverty flooded the continent

Seehofer also underscored higher levels of returns to countries of origin for those who do not get refugee status.

When asked directly whether Germany would rule out a system of compulsory distribution, Seehofer said: ‘Let’s introduce these other measures first.’

‘If we’re able to achieve a lot, then this question of distribution will retreat into the background,’ he said.

Seehofer said Germany was now registering between 300 and 400 arrivals per day of people seeking to stay, the same level as before the novel coronavirus pandemic caused a drop.

The meeting decided to set up a ‘coordination platform’ in Vienna to facilitate the exchange of information between EU states and those in the Western Balkans on migration.

Seehofer said he hoped the new platform would act as a sort of ‘early warning system’ to indicate when additional measures might be required to deal with migration issues.