Europe is at risk of a deadly tropical disease outbreak, experts have warned.

The recent heatwave is responsible for the increased threat, which has allowed virus-carrying mosquitoes to breed faster and spread disease more easily.

As a result, researchers predict a potential boom in the numbers of Zika, encephalitis, dengue fever and Chikungunya cases as high temperatures and global travel create the perfect storm.

The alert comes after 22 people died from the West Nile virus, which affected more than 400 people across Italy, Greece, Hungary, Serbia and Romania.

Indigenous to Africa, the Middle East, Asia and Australia, its unusually-large European presence, this year, means other fatal outbreaks could easily follow suit.

‘We have never seen so many cases of West Nile fever so early in the season. This is a dramatic increase,’ Jan Semenza, from the European Centre for Disease Prevention and Control, told The Guardian.

‘At higher temperatures, mosquitos replicate faster. Pathogens in the mosquito also replicate faster. Everything is speeded up and you get higher turnover, bigger populations of mosquitoes and a growing epidemic potential for viruses.

‘What it means in public health terms is we need to become more concerned about blood safety. If someone returns from abroad to Europe and has a virus in their blood, the Aedes mosquito can bite them, take up the pathogen and then bite someone else.’

Typically, tropical diseases are carried by the Aedes aegypti mosquito, but they can also be borne by the Tiger mosquito, which is found in Italy and Spain.

Last year, both Southern France and Italy experienced an outbreak of Chikungunya, but – fortunately – it was contained. 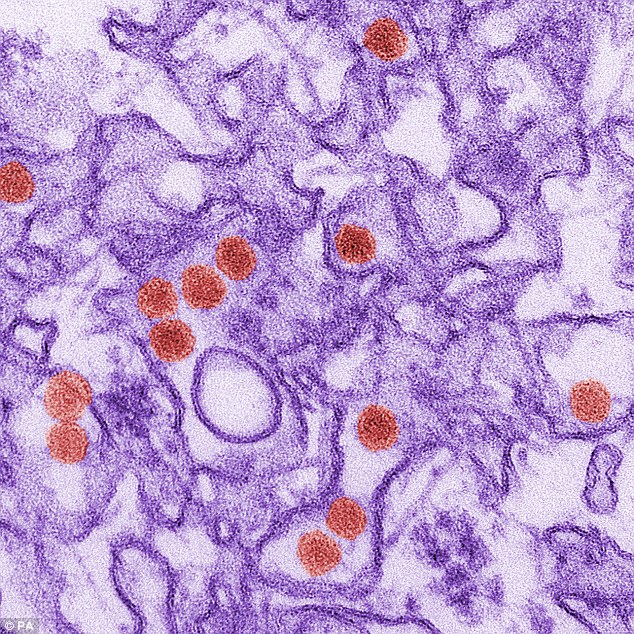 Deadly: The Zika virus (pictured) could easily be spread throughout Europe, experts warn

Tellingly, the prediction comes as health officials confirm a patient from the Middle East is being treated for the killer MERS virus in the UK.

Public Health England said the unidentified patient was diagnosed at a hospital in Leeds, before being moved to a specialist centre in Liverpool.

The Government-run body is now scrambling to contact passengers who were on the same plane from Saudi Arabia to Manchester as the patient, amid fears they may also be infected.

MERS, caused by the Middle East Respiratory Syndrome coronavirus, kills a third of those it strikes. It is considered one of the 10 most urgent threats to humanity by the World Health Organization, as it has no cure.

As a precautionary measure, NHS staff have been advised on how to control the deadly virus, which can be spread through close contact.

MERS often leaves patients battling symptoms of a common cold – but it can lead to pneumonia and kidney failure, which can both prove deadly.

It can be spread by touching infected camels or other humans struck down by the bug, although it is poorly understood by virologists.

The patient is now receiving treatment at the Royal Liverpool Hospital, a specialist centre for respiratory infectious diseases.