Austria has ordered an EU-wide manhunt for a suspected Russian spy accused of wiring military secrets from a Salzburg army base to Moscow for three decades.

Igor Egorovich Zaytsev, 65, is believed to have gathered sensitive information from a corrupt 70-year-old now retired colonel since the 1990s.

The alleged GRU agent reportedly paid the unnamed military officer hundreds of thousands of pounds in exchange for intelligence which he would then relay to the Kremlin.

An Austrian court has now issued an arrest warrant for Zaytsev after unearthed evidence suggested that he had been the main contact point for the colonel.

Wanted: Igor Egorovich Zaytsev, 65, is believed to have gathered sensitive information from a corrupt 70-year-old now retired colonel since the 1990

Defence Minister Mario Kunasek revealed last year that the crooked colonel had been arrested following a tip off from a fellow European intelligence agency.

Operatives reportedly witnessed a meeting between Zaytsev and the colonel who traded state secrets for £26,800.

Over 30 years, the Austrian army officer is believed to have given Zaytsev information relating to the country’s armed forces and details of its weapons system. 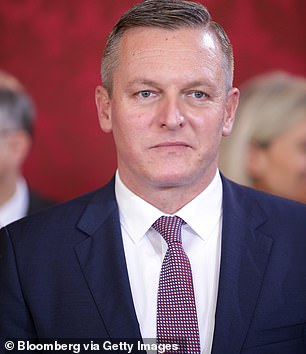 The investigation is being carried out in Salzburg because that is where he worked in the army’s control centre, and since it started, high-tech satellite communications equipment has also been found.

The colonel remains in custody and, although he initially cooperated with police, is now refusing to speak.

Diplomatic tensions between Austria and Russia have been strained since the allegations of spying came to light.

The colonel’s lawyer, Michael Hofer, said that the officer was not a spy, and had certainly never had any contact with Zaytsev.