A planetary rover that could be blasted into space for missions on the moon and Mars is being tested at a quarry in Milton Keynes.

The Sample Fetch Rover (SFR), affectionately known as Anon, was intended to collect sample tubes left on the surface of Mars by NASA’s rover Perseverance.

But, earlier this year, NASA and the European Space Agency (ESA) announced the rover would no longer be needed for this work.

This is because Perseverance – which landed on the red planet in February 2021 – is able to pick up its sample tubes and transport them by itself.

However, Airbus engineers who have been working on the SFR since 2018 are still putting the machine through its paces in case it is needed for another mission.

Ben Dobke, project manager at Airbus, said: ‘Even though the mission may have faded away, the core technology is still ready and able to go and this is the kind of the final step in proving that it works.’

The Sample Fetch Rover (SFR), affectionately known as Anon, was intended to collect sample tubes left on the surface of Mars by NASA’s rover Perseverance. It is still being tested on rocky terrains at a quarry in Milton Keynes, to prepare it for other missions 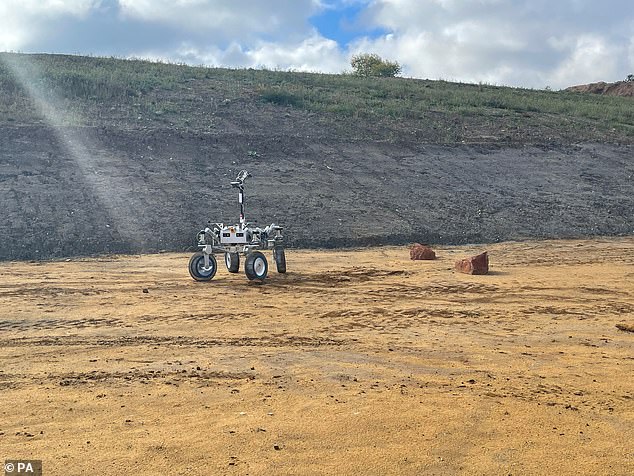 Quarries provide a unique, dynamic terrain that are used for preparing planetary rovers for the Martian landscape. The site in Milton Keynes is used as a similar landscape cannot be replicated within the Mars Yard test facility at Stevenage

WHAT IS THE SAMPLE FETCH ROVER?

The Sample Fetch Rover (SFR), or ‘Anon’ is a planetary rover that was originally designed to collect sample tubes and take them to a stationary spacecraft that will deliver them back to Earth.

It was initially intended to perform this function with NASA’s Perseverance rover, which is currently collecting samples on Mars, in 2026.

However this plan was scrapped in August this year, as Perseverance is able to take its sample tubes to the launch vehicle itself.

Quarries provide a unique, dynamic terrain that are used for preparing planetary rovers for the Martian landscape.

The site in Milton Keynes is used because a similar landscape cannot be replicated within the Mars Yard test facility at Stevenage.

SFR’s drive about the quarry marks the first time all its systems are being tested simultaneously.

Airbus is looking to ensure its surface mobility capability is maintained for the UK space sector, particularly with NASA’s approaching Artemis lunar mission.

Artemis is a moon exploration program to send people, including the first woman and first person of colour, to the moon by 2025, which the UK is contributing to.

Mr Dobke said: ‘With the Artemis programme happening at the end of the decade, the focus has started shifting towards the moon.

‘So any rovers or autonomous vehicles on the moon, this software can certainly be applied to that in the future.’

Further work is required to ensure SFR is able to function in the extreme temperatures and scant atmosphere of the lunar surface if it is to make it to the moon.

Engineers also have to find a way to power up the rover after spending 14 nights essentially in sleep mode because of the cold temperatures when it is in darkness.

The four-wheeled rover is designed to operate six times faster than the ESA’s other Mars rover ExoMars, however this will involve greatly enhanced autonomous navigation capability.

This ability to perceive its environment while not being operated is what is being tested in the outdoor environment at Milton Keynes. 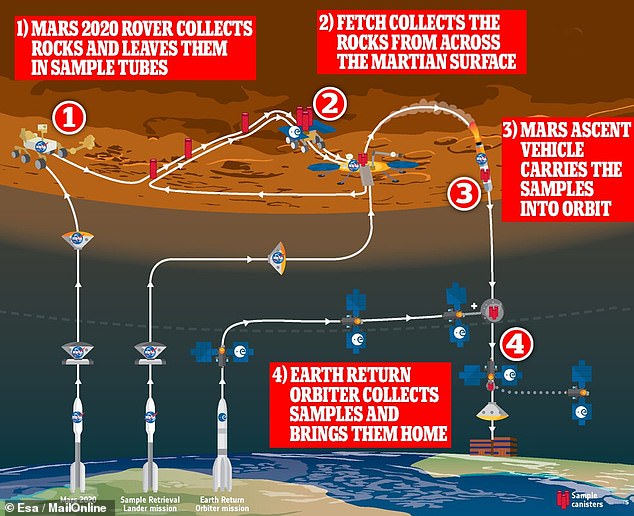 The Sample Fetch Rover (SFR), or ‘Anon’ is a planetary rover that was originally designed to collect sample tubes dropped by Perseverance on Mars and take them to a stationary spacecraft that will deliver them back to Earth. However this plan was scrapped this year. Pictured: The original plan for SFR, then known as ‘Fetch’

Despite these challenges, the Airbus team are still optimistic about SFR’s future proespects, which could include helping to build habitats on the moon.

Mr Dobke said: ‘There’s various avenues of investigation so it could be scientific, going into places where there’s lunar ice.

‘It could be in support of human habitats, whether it be autonomously building habitats or whether it’s supporting driving astronauts around on the surface.

‘So there’s a number of different applications that we could have autonomy on the moon.’

However, a possible focus on moon missions does not mean all hope is lost for the SFR visiting Mars.

Dr Adam Camilletti, space systems lead at the UK Space Agency, said: ‘All the technology that’s been developed for Sample Fetch Rover is still really, really useful because we’ve developed a huge amount of expertise and know-how in the UK.