Europe’s press has reacted to a delay in the Brexit deadline by declaring the ‘battle for fisheries is now on,’ with neither side ‘willing to bear the responsibility of failure’.

Sunday’s deadline to reach a deal on the free trade agreement between Britain and the European Union was extended until the end of the month yesterday, with Boris Johnson warning the two sides were still ‘very far apart’.

Europeans awoke to the news in today’s papers as Le Courrier Picard in France asked: ‘To Deal or Not to Deal?’

The paper said negotiations were set to ‘drag on,’ between both sides with ‘no one willing to bear the responsibility for the failure,’ of not reaching an agreement.

An extension was broadly welcomed in papers on the Continent this morning, hours before there was added hope a deal could be reached. 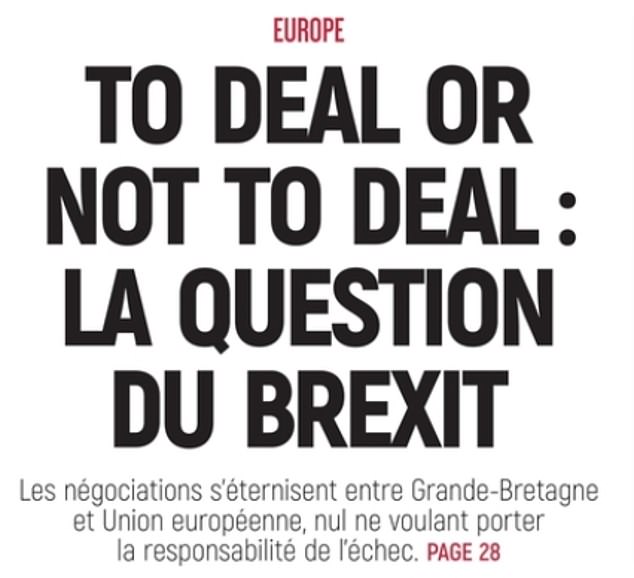 La Vanguardia in Spain ran the headline: ‘The EU and the UK avoid the break-up and give themselves more time to negotiate.’

Downing Street offered another glimmer of light that an agreement could be reached as as the PM’s spokesman declined to repeat that No Deal is ‘very likely’ – saying it was only a ‘potential outcome’.

EU commission president Ursula von der Leyen said the discussions were in the ‘very last mile’ amid claims that both sides have given ground on so-called ‘level playing field’ rules. 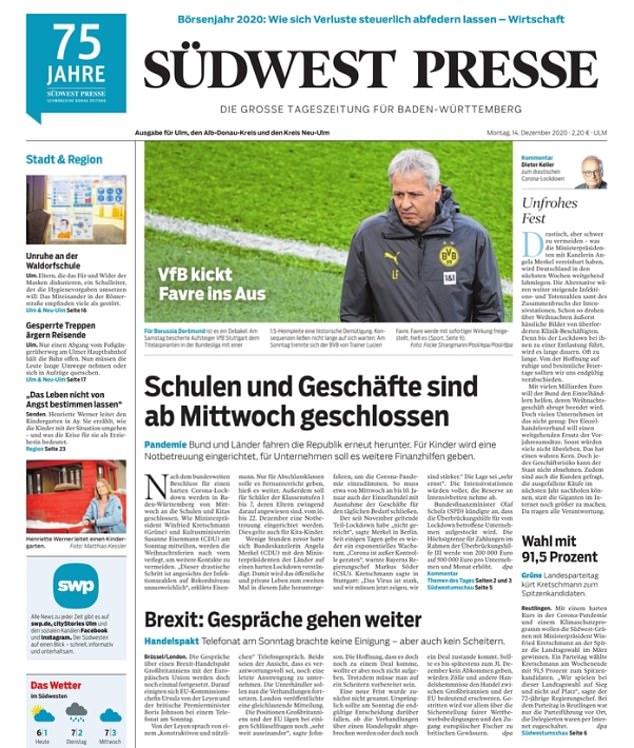 Sudwest Presse in Germany said there had been ‘no progress in the dramatic struggle,’ for Britain and EU to reach an agreement – althought today offered a glimmer of hope as the PM’s spokesman declined to repeat that No Deal is ‘very likely’ – saying it was only a ‘potential outcome’ 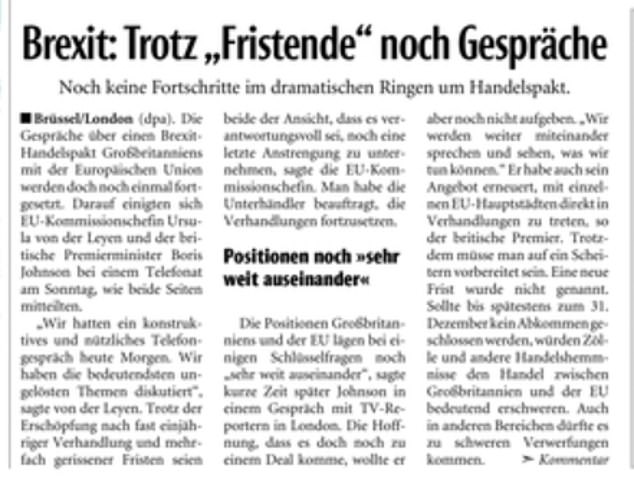 ‘We are talking about a new beginning with old friends,’ she said. ‘We are on the very last mile to go. But it is an essential one.

‘We want a level playing field, not only at the start, but also over time.’

Danish paper Politiken said the ‘battle for fisheries is now on,’ as fishing rights remain one of the key stumbling points toward reaching a deal.

Last night the paper spoke to fishermen in the villages of Thyborn and Hanstholm, with locals expressing frustration over delay and anger over threats to send British gunboats towards EU fishermen.

It comes as French fishermen warned they will set up blockades to stop British vessels from ‘supplying the French market’ in the event of a No Deal Brexit.

They said they would respond to having ‘zero access’ to UK waters by blocking ships carrying vital goods from entering major ports such as Calais.

Dimitri Rogoff, President of the Normandy regional fisheries committee, told radio station France Info: ‘If we are deprived of our fishing grounds, we will not watch the British supply the French market.’

Speaking about attempts to reach a deal, Mr Johnson said yesterday: ‘We’re going to continue to try and we’re going to try with all our hearts and be as creative as we possibly can, but what we can’t do is compromise on that fundamental nature of what Brexit is all about which is us being able to control our laws, control our fisheries, it’s very, very simple.

‘I think our friends get it, and we remain willing to talk and will continue to do so.’ 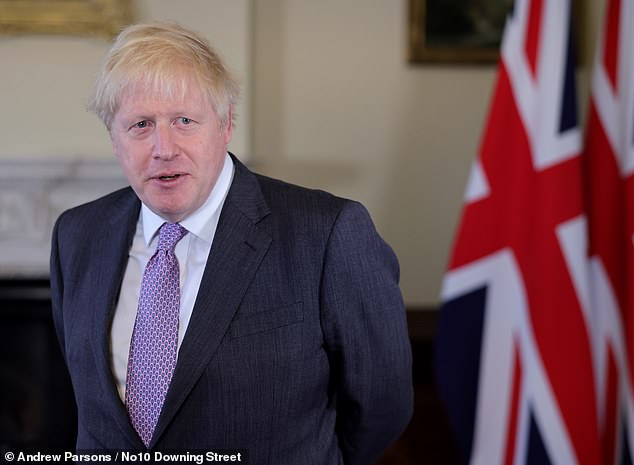 Boris Johnson said the country could not compromise on control of its fisheries in order to get a deal, as Danish paper Politiken spoke to angry fishermen who are growing impatient for an agreement to be reached

The Irish Examiner warned talks were on a ‘cliff-edge,’ following last night’s extension.

Ireland’s foreign affairs minister Simon Coveney told the paper: ‘If this is to fail, we can’t allow failure to happen with 24 hours to go before a cliff edge.’ 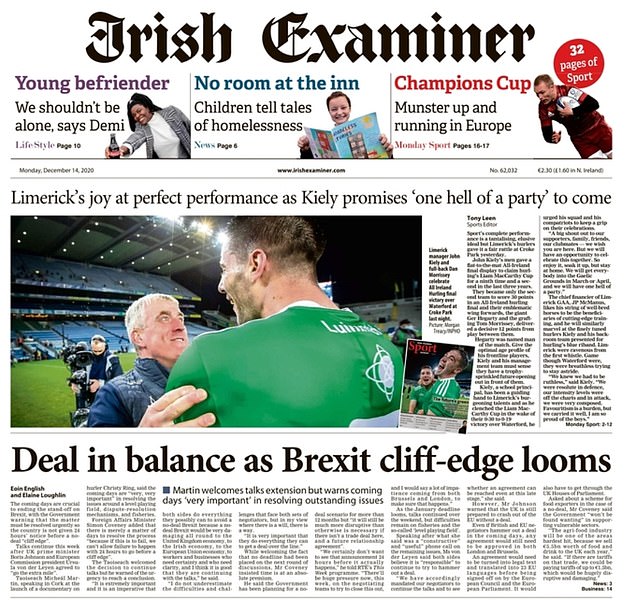 Ireland’s foreign minister warned talks remain on a ‘cliff edge,’ as taoiseach Michael Martin said it was ‘imperative,’ a deal was reached

But in the UK, senior cabinet members believe a deal could be back on the cards following last night’s extension.

One senior minister told The Telegraph: ‘It all boils down to making sure any arbiter gives us the freedoms we need and the reassurances they need. It must be independent and both sides must have confidence in it.

‘It’s possible that any deal could be accompanied by political assurances about the two sides’ behaviour.

‘It’s also worth remembering that if Britain decides at any point in the future that a deal is no longer working, it can cancel the deal, which would be a lot more straightforward than leaving the EU in the first place.’