This is Slovenia — sitting prettily between Italy (to the west), Croatia (to the south and east) and Austria (to the north) — an often overlooked country, which until 1991 was part of Yugoslavia and is now a thriving EU democracy.

In summer, its contrast with the cheek-by-jowl fleshpots of southern Europe is evident as soon as you step off the plane at the capital, Ljubljana.

Vibrant: Hugo Brown’s tour of Slovenia begins in the small capital, Ljubljana, which is ‘packed with Baroque architecture’. Pictured is the Ljubljanica river running through the city

This small city (population 300,000) is packed with Baroque architecture and is largely pedestrianised — more of which later.

I’m here with my parents in late spring, returning a lifetime of favours and taking them on holiday. We’re exploring the outdoors of this country, where everything seems to have been herded together like a florist creating a bouquet.

But first, we leave the capital and head 40 minutes south-east to Hisa Ida, a seven-room family-run hotel in Ivancna Gorica, where my parents and I have a lesson in Slovenian directness after asking how to turn the heating down — ‘Open the window.’ 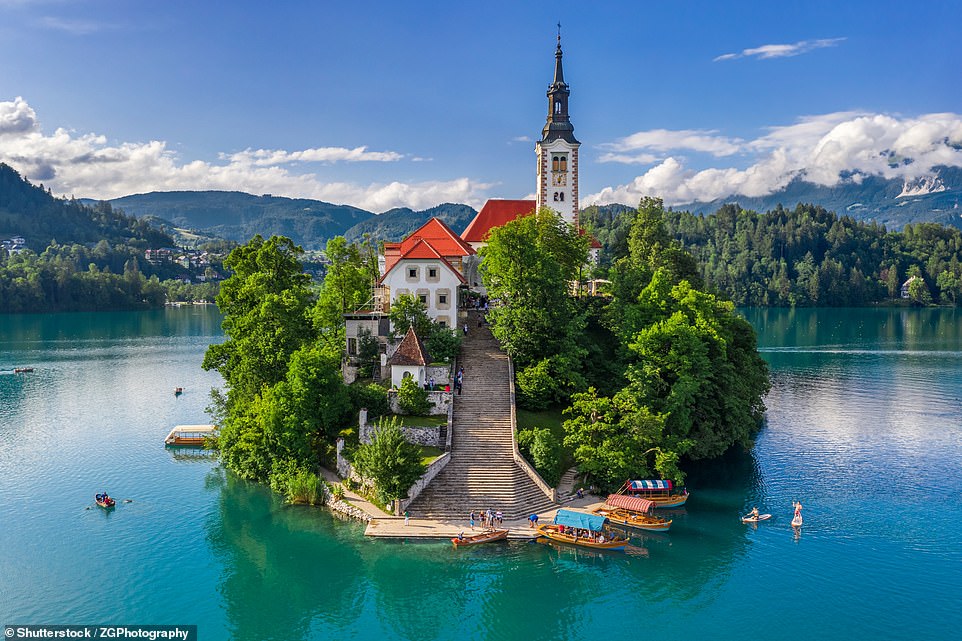 Refreshing: Hugo swoops over Lake Bled, in the country’s north-west corner, on a half-hour helicopter flight. Above is the Assumption of Maria Church on the lake’s Bled Island 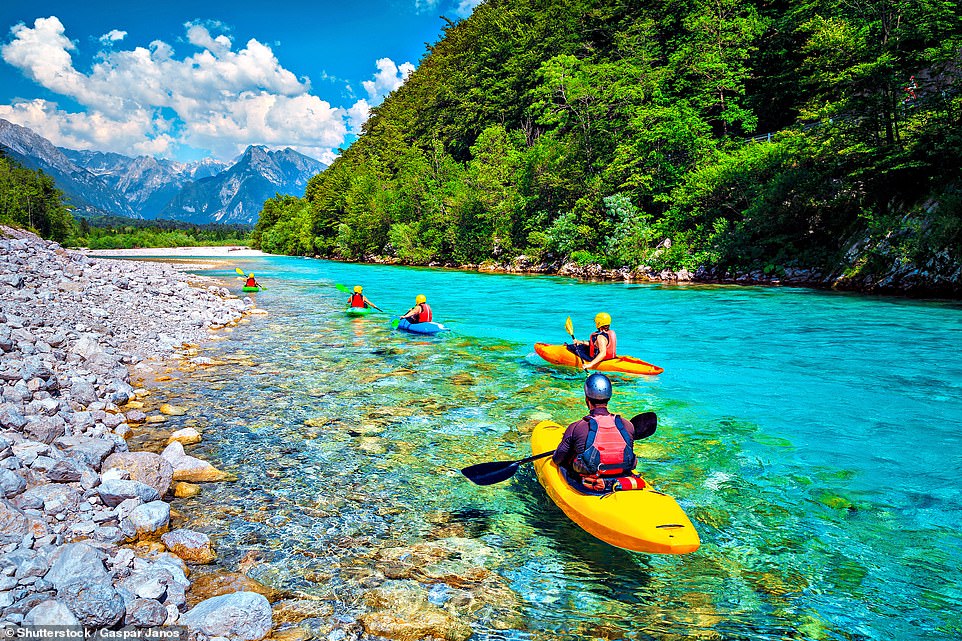 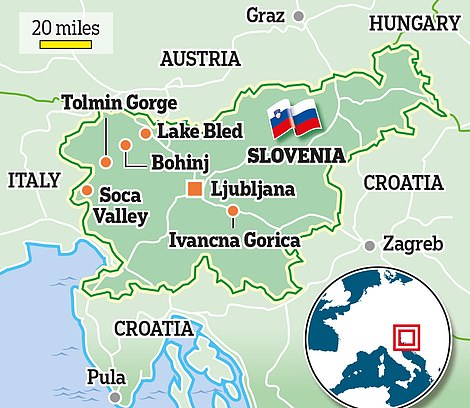 ‘It’s the density and availability of outdoor activities that attracts many to this country,’ writes Hugo

We’re served generous portions in the mornings and evenings — at one breakfast we stand up to leave after the arrival of meats, cheese, eggs, fruit, toast, jam and pancakes, only to see another course appearing through the kitchen door.

This sets us up well for a day of fly fishing with Green Adventures on the moss-laden River Krka. We are surrounded by wide green pastures, red-roofed storybook houses, churches with tolling bells and steep hills.

It’s the density and availability of outdoor activities that attracts many to this country. Hiking, kayaking, cycling (or e-biking), skiing and fishing are all on offer pretty much year-round. The summer is popular, with average temperatures in the mid-20s, and it is cheaper here than in most European destinations — about €2 for a pint is a good barometer.

Many of Slovenia’s alpine wonders are herded into the country’s north-west corner, so the next day we drive for about an hour, back past the capital, for a half-hour helicopter flight with Flycom Aviation. Circular aerial tours are common and can be as cheap as €50 per person, but somewhere around €150 is more likely. We see the Julian Alps, the Karawanks mountains, Lake Bled, Lake Bohinj, the Valley of the Seven Lakes and the Soca Valley. 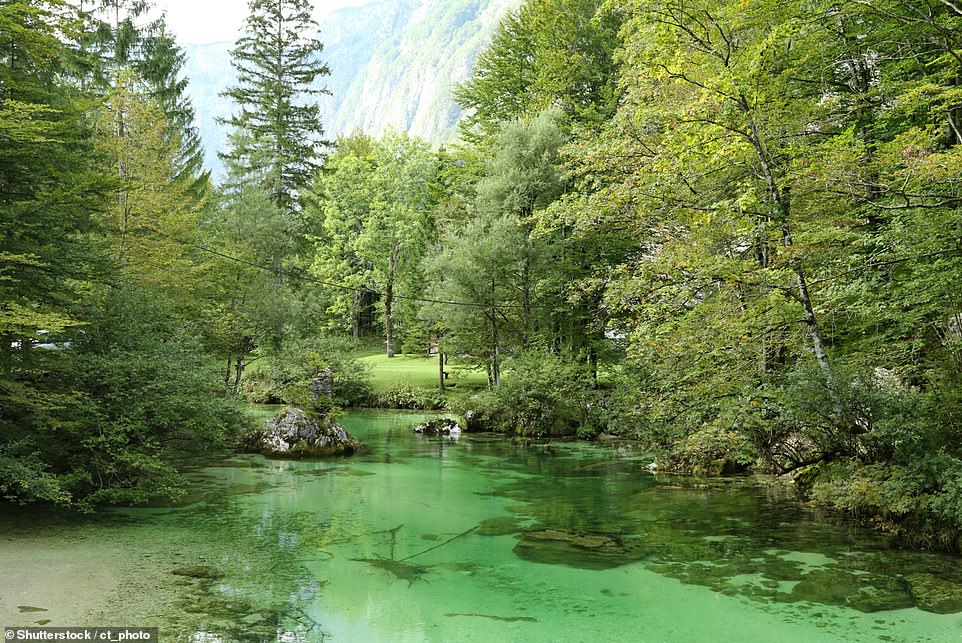 Hugo spends an afternoon fishing on the Sava Bohinjka river (above) in Bohinj, ‘among the country’s many calling cards — pine forest; steep, snow-covered peaks [and] clear, turquoise, icy water’ 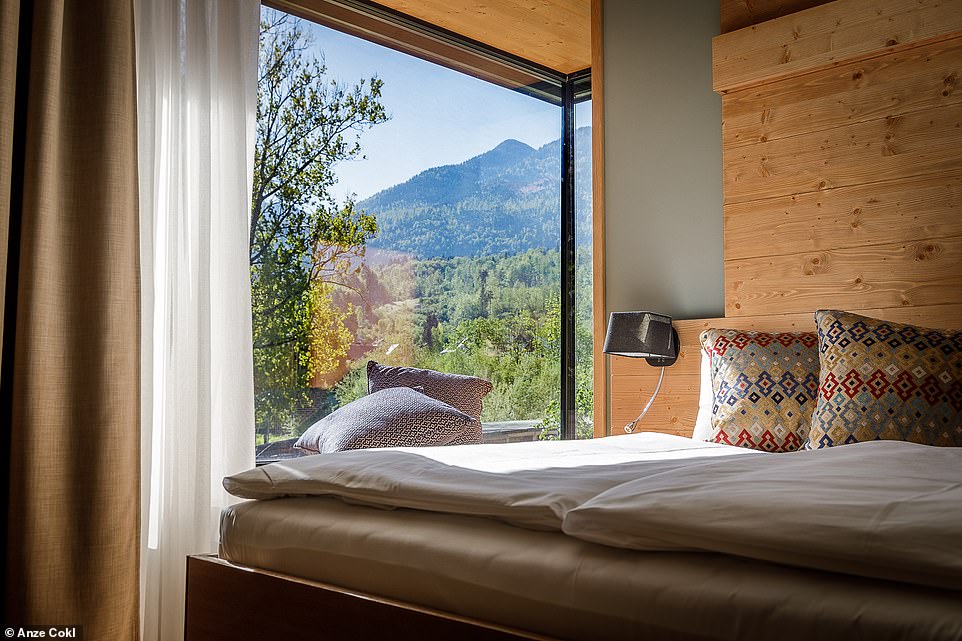 Above is one of the guest rooms at Sunrose 7, a small boutique hotel in Bohinjska Bistrica, where Hugo finds that the ‘hyper-modern tasting menus jostle with hearty stews, sausages and sauerkraut’ 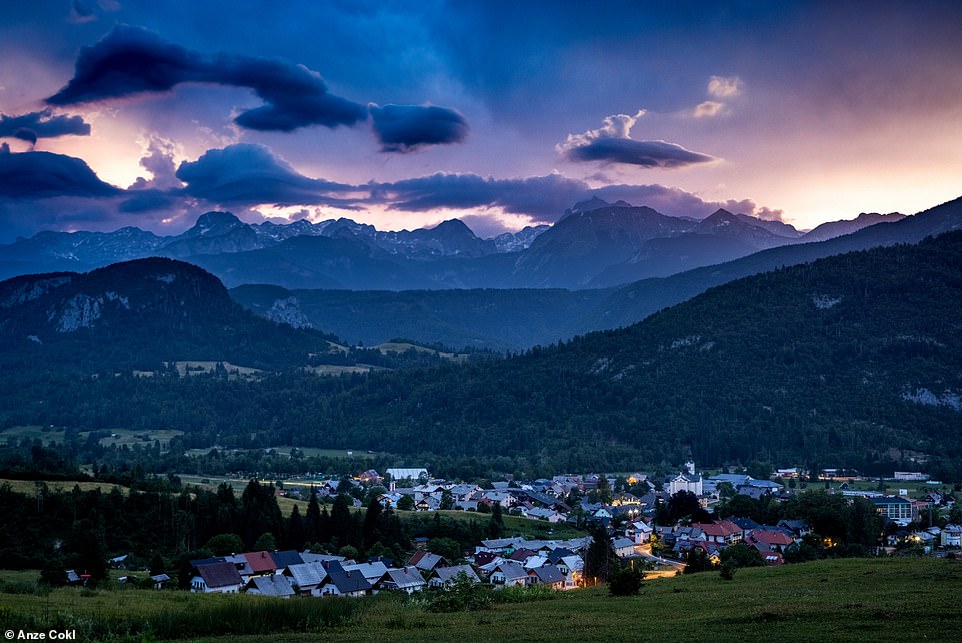 The landscape surrounding Sunrose 7 hotel. ‘A ten-minute drive can take you from a busy town centre deep into the mountains,’ says Hugo

The highest peak, Triglav (9,396 ft), is surrounded by farms and smallholdings. Our pilot proudly tells us about climbing the mountain last summer with his eight-year-old daughter. My mother tells him how beautiful the country is — ‘Yes, but it does get boring after 12 or 14 flights a day,’ he replies.

After another hour’s drive further north-west, we spend the rest of the day fishing on the Sava Bohinjka river in Bohinj, which places us among this country’s many calling cards — pine forest; steep, snow-covered peaks; clear, turquoise, icy water; and a guide, Matjaz, who spends the afternoon picking up litter from the riverbank.

It seems most Slovenians would probably shrug their shoulders at the kinds of eco pledges the Leonardo DiCaprios or Emma Watsons of this world make so publicly.

The environment is important here, with a commitment to sustainability seen through a disinterest in oversaturation, devotion to home-grown produce and the popularity of electric cars. 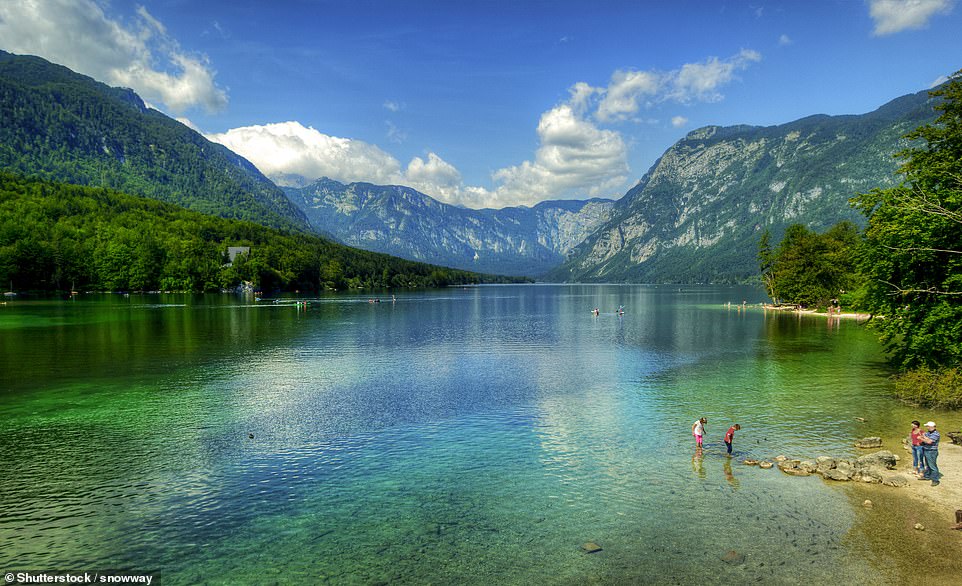 Go with the flow: Hugo sets off on an e-bike tour that brings him to Lake Bohinj, above, the largest lake in Slovenia

That evening, another side of the country is revealed at nearby Sunrose 7, a small boutique hotel with remote control-powered Velux windows and a gleaming coffee machine at reception. Juxtaposition is everywhere here. In restaurants, light, hyper-modern tasting menus jostle with hearty stews, sausages and sauerkraut. A ten-minute drive can take you from a busy town centre deep into the mountains.

An e-bike tour the next morning brings us to Lake Bohinj which, at just over two miles long, is the largest lake in the country and sits in a green valley.

On this drizzly day it’s stripped of the picnickers and bathers who usually flock here in summer and is even more befitting of the tale that God created Bohinj Valley for Himself and emptied it of people. But a few people were left behind and that’s how the Slovenians came to live here. We encounter rain in Tolmin Gorge — the lowest point of the Triglav National Park at 590 ft above sea level — where our guide seems to emerge out of the bushes like Narnia’s Mr Tumnus. He leads us along sheer cliffs, above clear-blue water and points out black and yellow salamanders slinking out from bushes, encouraged by the wet weather. 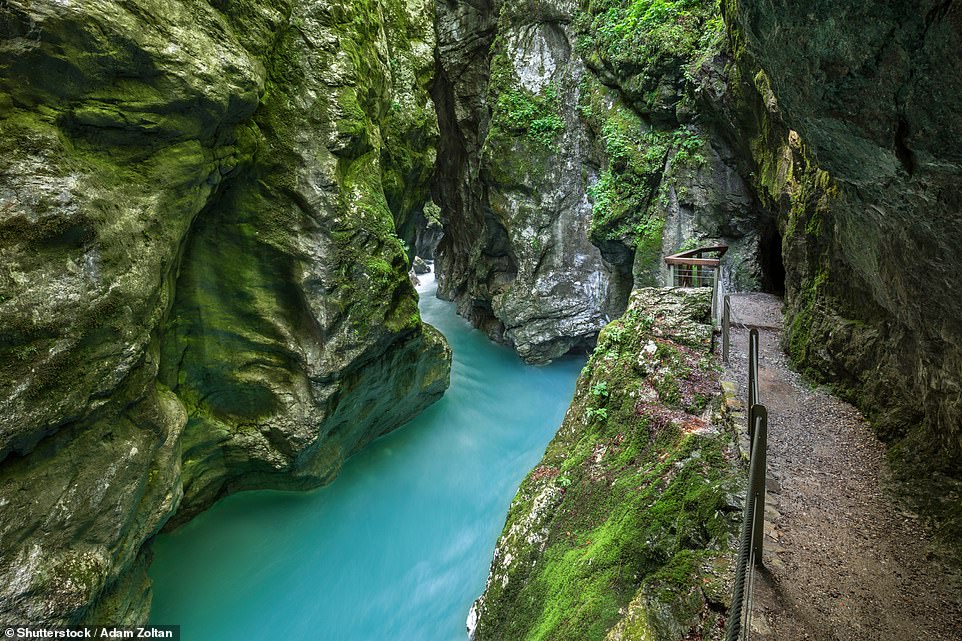 Hugo encounters rain in the Tolmin Gorge (above), the lowest point of the Triglav National Park at 590ft above sea level. He writes: ‘Our guide seems to emerge out of the bushes like Narnia’s Mr Tumnus. He leads us along sheer cliffs, above clear-blue water and points out black and yellow salamanders slinking out from bushes, encouraged by the wet weather’ 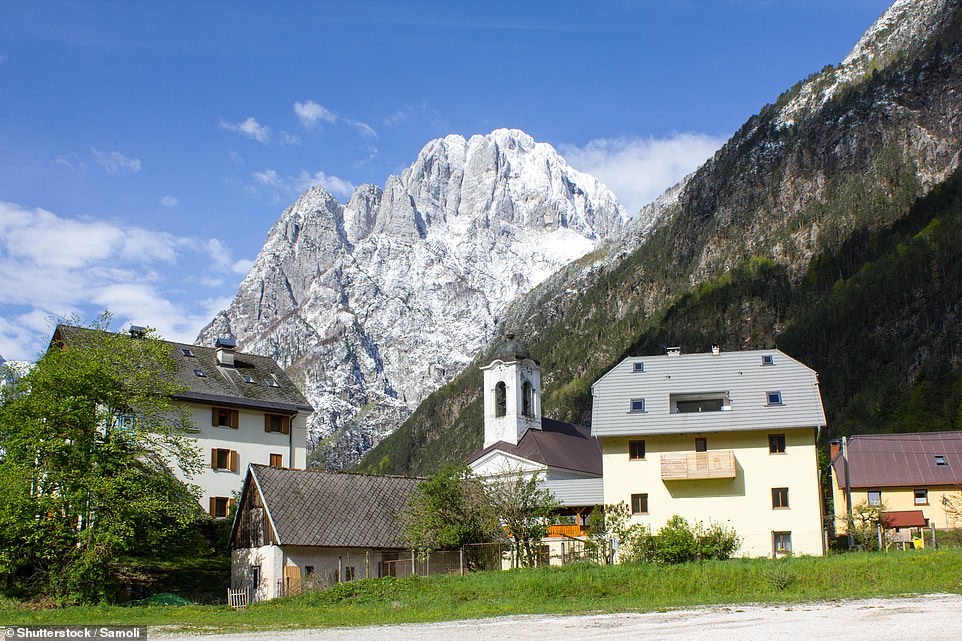 In the isolated village of Log pod Mangartom, pictured, Hugo dines on a seven-course tasting menu at the mountainside restaurant of Mangrt

He reminds us that, because of the rain, ‘this is a lucky day for nature’, and finishes our tour on a plea for world peace.

Slovenians have good reason to be interested in peace. It took a ten-day war with Yugoslavia to gain independence. Italian occupation between the World Wars meant this was one of the first anti-fascist enclaves. The Soca Front (in this valley) saw brutal action from 1915 to 1917 and was described by Ernest Hemingway in A Farewell To Arms as ‘the silly front but very beautiful’. It’s hard to imagine boots and mud and gunfire tearing up this quiet place now.

We reach our terminus that evening in the isolated village of Log pod Mangartom and dine at Mangrt, a mountainside restaurant which emerges out of the pitch black around a mile from the Italian border. 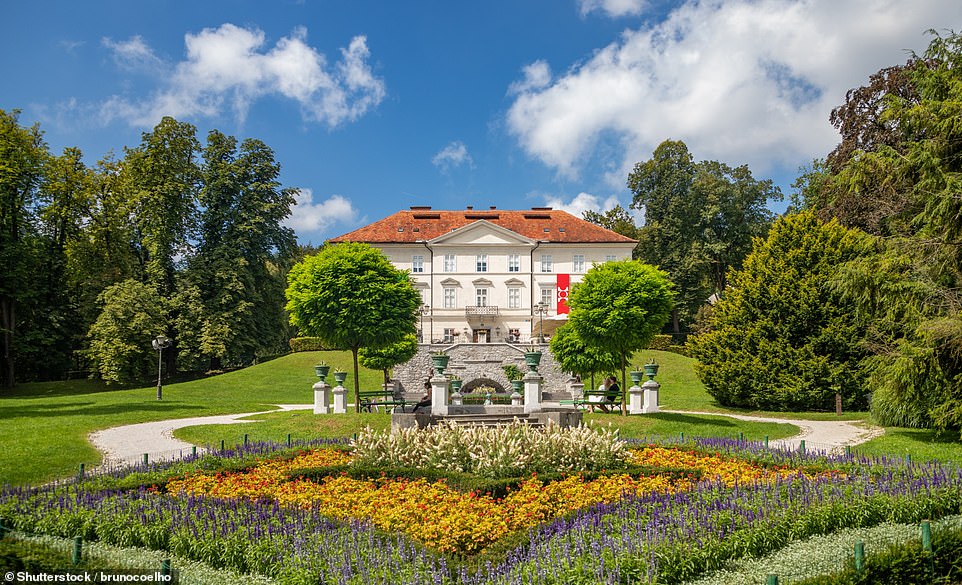 Hugo ends his trip back in Ljubljana, where he pays a visit to the ‘spectacular’ Tivoli Park (above) 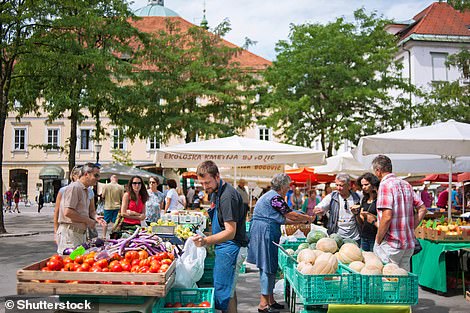 Above is one of the open-air markets in Ljubljana

It has the look of a humble village pub, albeit one serving a seven-course tasting menu. Everything is prepared by husband-and-wife team Tomaz and Yuki Sovdat. That is ox tongue palate cleansers, trout dumplings, cheeses, shrimp broths, venison, duck and wine — all locally produced. The miracle of a grated egg yolk, charred ginger dust, dehydrated this, oil of that and a juniper ice cream like gin disarmed; crisp and cold.

And, then, back to Ljubljana just a couple of hours’ drive away the next morning. Everything here centres on the Ljubljanica River — the castle, spectacular Tivoli Park, open-air markets, churches, pretty squares and restaurants serving endless varieties of natural wine.

At the Museum of Modern Art, which is packed with students, I’m transported back to East London, particularly by a man in deep conversation with the bartender about coffee beans. 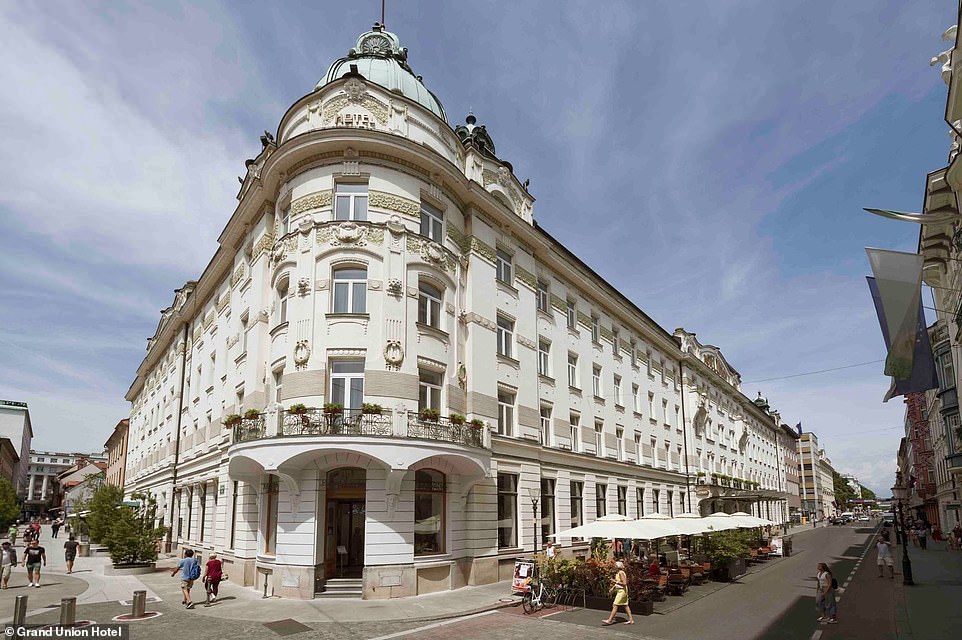 Hugo stays at the Grand Union Hotel, a hotel that was ‘good enough for the Queen (even at just £78 per night), when she checked in on a visit in 2008’ 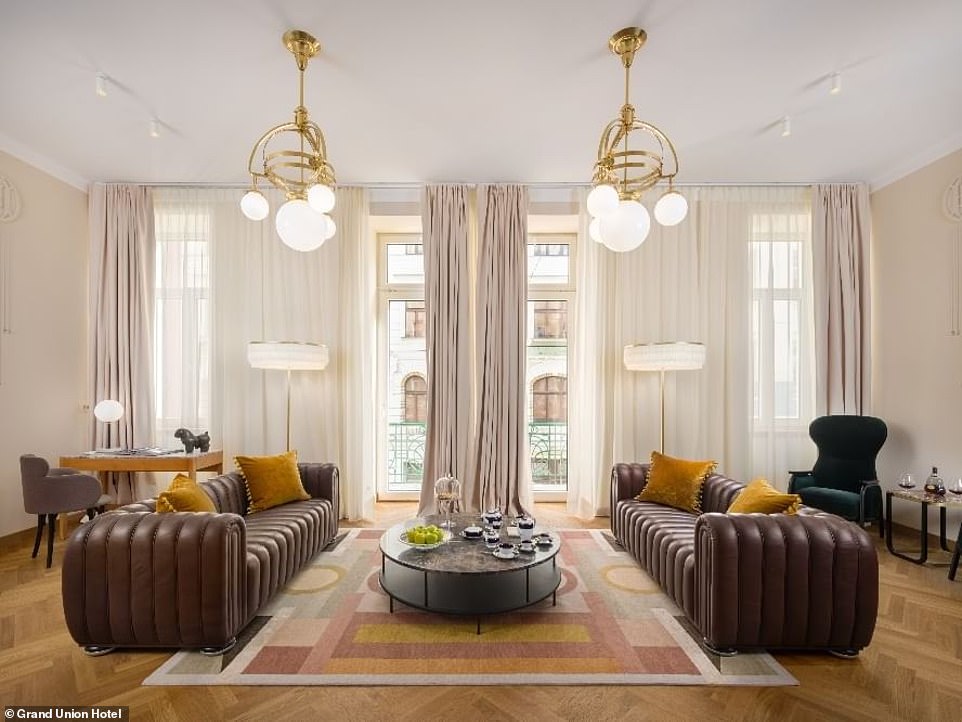 Describing the Grand Union Hotel, Hugo says: ‘There’s a wall with letters signed by famous guests. They might want to remove Prince Andrew’s, but I’m pleased to see those of chess grandmaster Garry Kasparov and singer Nick Cave.’  Above is the hotel’s Grand Union Suite

Our guide, Ksenija, explains the story of the capital’s flag, on which a dragon sits — slayed by Jason and the Argonauts on their return to Greece. ‘Why are people always killing dragons?’ asks my father as we walk the streets and admire the small electric buggies which dart around offering a free rides for the elderly and those struggling with heavy bags.

We stay at the Grand Union Hotel, which was good enough for the Queen (even at just £78 per night), when she checked in on a visit in 2008. There’s a wall with letters signed by famous guests. They might want to remove Prince Andrew’s, but I’m pleased to see those of chess grandmaster Garry Kasparov and singer Nick Cave.

Slovenia is irresistible. There is so much crammed into a tight space. The landscape inspires a natural numinous, there’s exciting gastronomy, more good wine than anyone could hope to sample in one trip and a delighted and delightful people all surrounding one of Europe’s most underrated cities.