Eurostar vs plane: KLM is pitted against a high-speed train in a race to Amsterdam from London

Eurostar vs plane: Travel experts film a riveting race to Amsterdam from London, pitting KLM against a high-speed train service

Eurostar has announced a fourth direct train service from London St Pancras to Amsterdam, meaning more people can reach the Dutch capital conveniently and in comfort.

It’s a greener way to travel, too, when compared to flying. A Eurostar journey emits up to 93 per cent less CO2 than a plane journey, with the carbon footprint of one flight the equivalent of up to 13 Eurostar journeys. But is it quicker? That’s the key question for many travellers.

Two travel experts from The Points Guy UK (TPG) filmed a fascinating race between said Eurostar and a KLM flight from London City Airport to the famously canal-riddled citadel to find out, with the plane beating the train to the ‘finish line’ – Dam Square – by a mere 15 minutes.

Nicky Kelvin and Liam Spencer from The Points Guy UK filmed a fascinating race to Amsterdam between a Eurostar and a KLM flight from London City Airport. Nicky and Liam are pictured above at London Bridge, the start line

The hopper flight option was put to the test by Liam Spencer, who paid £270 for his trip to Amsterdam’s Schiphol Airport, plus £3.60 for a Docklands Light Railway (DLR) journey to London City Airport and £4.87 for a train from Schiphol to the centre of Amsterdam.

The race starting point was London Bridge and Liam walked from there to Bank to catch the DLR.

He described reaching City Airport as ‘super easy’ and declared that it’s ‘by far the most convenient airport to fly out of if you’re near London city centre’. 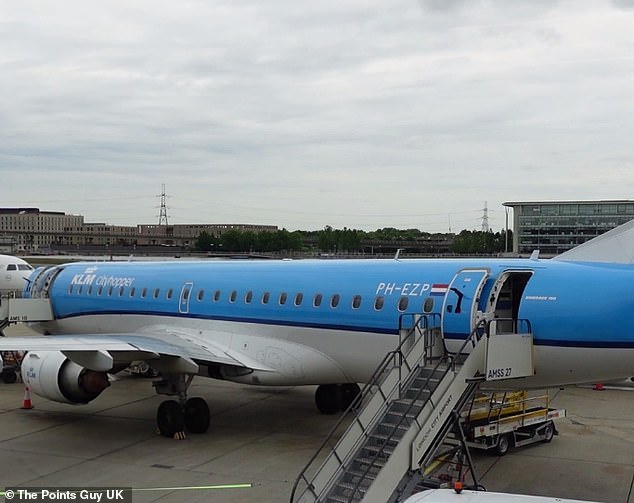 The hopper flight option was put to the test by Liam Spencer, who paid £270 for his trip to Amsterdam’s Schiphol Airport. His plane is pictured above at London City Airport 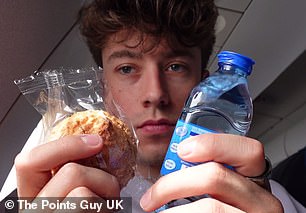 Liam described the flight as ‘extremely quick and comfortable’

He said the flight itself was ‘extremely quick and comfortable’ and that despite being in the air for only 45 minutes, ‘the crew still found time to bring round a drink and a snack for every passenger’.

After touchdown, the final leg of his journey was helped by Schiphol Airport leading directly into Schiphol train station.

From there he took a sprinter train service to Amsterdam Centraal, a five-to-10-minute dash from Dam Square.

Any downsides to the journey?

Liam described £270 as being ‘fairly expensive for such a short one-way flight’ – and revealed that the flight took off around 15 minutes after the scheduled departure time. ‘I was fortunate that this didn’t lead to me losing the race,’ he said. 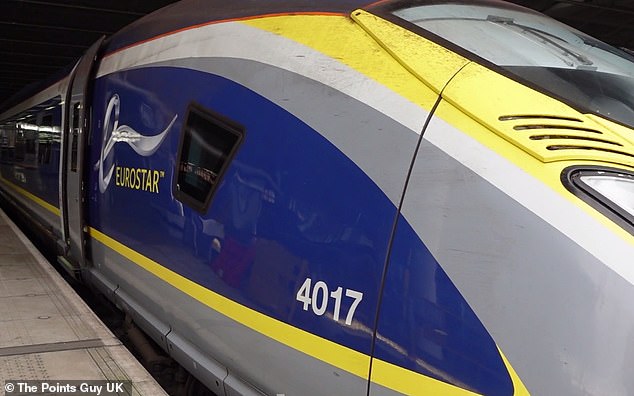 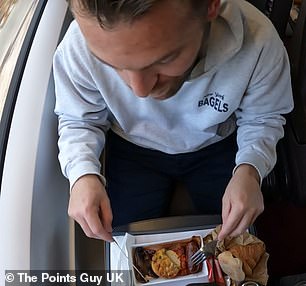 Racing the plane with a high-speed Eurostar service to Amsterdam Centraal was Head of The Points Guy UK, Nicky Kelvin.

He paid £299 for a top-tier Business Premier ticket and £2.50 for a Tube ride to King’s Cross St Pancras.

He appreciated being able to relax in the lounge in the Eurostar terminal and described the train as ‘incredibly comfortable’, adding that it was ‘spacious and the food and beverage offering solid’.

Another upside was arriving ‘smack bang in the middle of Amsterdam having already cleared customs and immigration in London’. It was ‘wonderfully efficient and convenient’, he added.

Nicky said: ‘The train to Amsterdam routes via Brussels and at three hours 55m is rather long, especially in comparison to flight times that clock in at well under one hour.

‘And there are limited direct train options between London and Amsterdam.’

Though from September, with the extra train, Eurostar will have capacity to carry up to 3,600 people per day between London and the Netherlands, the equivalent of 18 aeroplane journeys.

The competition is hotting up for the likes of KLM.

To see the full TPG UK video click here. For more information on travel tips and tricks, sign up to The Points Guy UK. 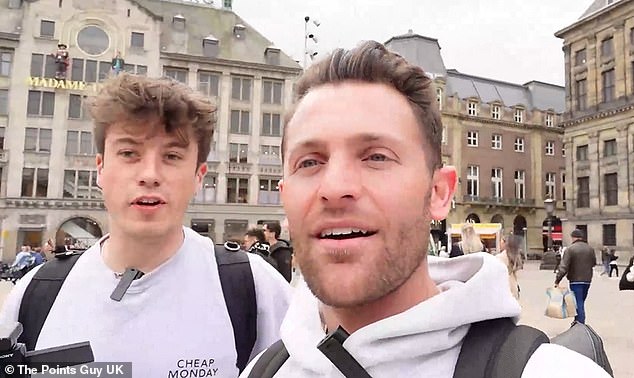