Eurovision 2023 will be held in UK on behalf of Ukraine

Britain will host the Eurovision Song Contest next year on behalf of Ukraine, organisers confirmed today after concluding that the war-torn country could not hold the event for ‘safety and security reasons’.

The Ukrainian entry, Kalush Orchestra, won the annual competition just over two months ago in an emotional victory in Turin, Italy, on May 14 and it is traditional that the winning country hosts the event the following year.

But the European Broadcasting Union said last month that it had concluded after a study that the ‘security and operational guarantees’ required to host the event could not be fulfilled by Ukraine’s public broadcaster UA:PBC.

The decision to rule out Ukraine as the 2023 host prompted its culture minister Oleksandr Tkachenko to issue a statement ‘demanding to change the decision’, while UA:PBC also expressed its ‘disappointment’ at the time.

The BBC, as national broadcaster of the UK, which was the runner-up this year with Sam Ryder’s Space Man, was invited to act as host – and the corporation confirmed today that it would hold what will be the 67th contest. The event normally draws a television audience of about 200million and was last held in Britain in Birmingham in 1998.

That contest came after Katrina and the Waves won with ‘Love Shine a Light’ in Dublin the previous year, which remains the last time Britain was victorious. The UK has won Eurovision a total of five times since it began in 1956.

The event is mostly funded by contributions from the participating broadcasters, which adds up to £5.3million combined and varies for each country. There is also a payment by the host broadcaster – in this case the BBC – of between £8million and £17million, which organisers say depends on ‘local circumstances and available resources’.

There is also a contribution from the host city, either financially or ‘in kind’ such as covering expenses; and then funding through commercial revenue from sponsorship agreements, ticket sales, voting and merchandise.

The location in the UK for 2023 is set to be chosen in the coming months, with a bidding process expected to be launched this week. Organisers said the date for the event will also be revealed ‘in due course’, as will the logo.

The Ukrainian entry, Kalush Orchestra, won the most recent Eurovision Song Contest in Turin on May 14 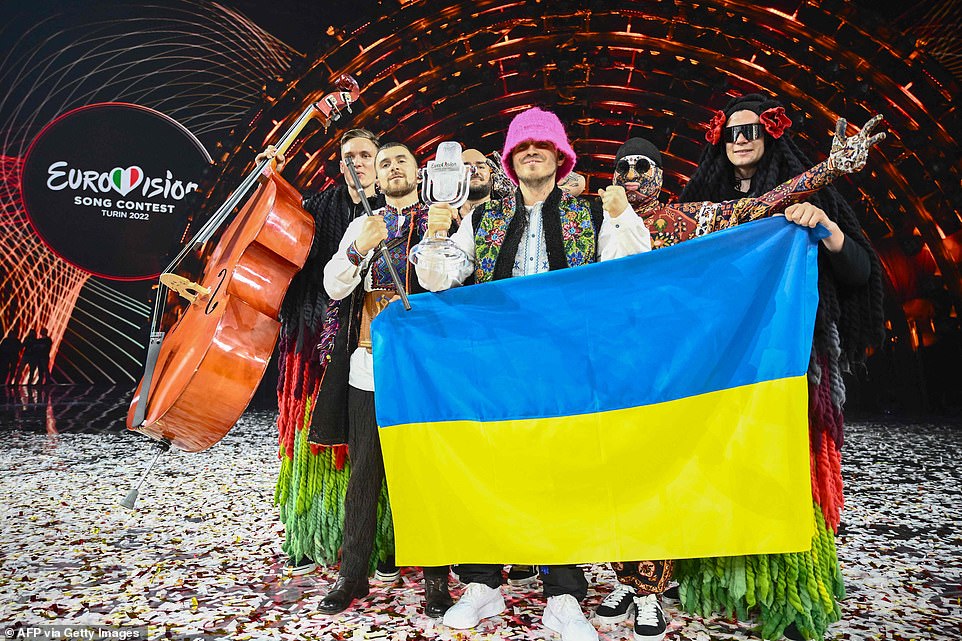 Ukraine will automatically qualify for the grand final alongside the so-called ‘Big Five’ – the UK, France, Germany, Italy and Spain – who each get a free pass because of their financial contributions.

The UK has staged the Eurovision Song Contest more times than any other country, in the following cities:

Prime Minister Boris Johnson said the UK would ‘put on a fantastic contest on behalf of our Ukrainian friends’, adding that in talks with Ukrainian President Volodymyr Zelensky last week they ‘agreed that wherever Eurovision 2023 is held, it must celebrate the country and people of Ukraine’.

He continued: ‘As we are now hosts, the UK will honour that pledge directly – and put on a fantastic contest on behalf of our Ukrainian friends.’

Downing Street said it had been Boris Johnson’s ‘strong wish’ for Ukraine to host the Eurovision Song Contest.

The Prime Minister’s official spokesman said: ‘It’s deeply regrettable that a Ukraine-hosted Eurovision will not be possible. But we are confident the BBC and UK will pull out all the stops to make sure it is an event that celebrates and honours the country, the people and the creativity of Ukraine.’

Asked if Britons should fly Ukraine flags to mark the event, the spokesman said: ‘Absolutely. As we saw, a number of countries and the people of the UK (were) supporting both our UK entry and the Ukrainian entry.

‘I’m sure the Prime Minister would encourage the public to get behind this opportunity to really demonstrate how the UK is supporting the people of Ukraine.’

‘London is ready and willing to step in. We would be honoured to put on a contest that celebrates the people of Ukraine and shows off the very best of Britain.’ 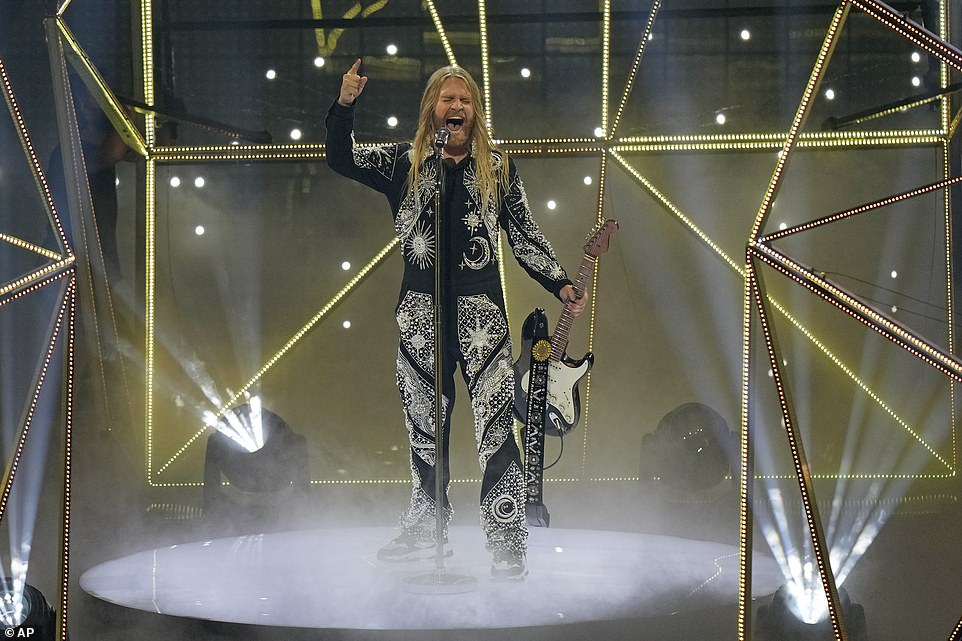 Sheffield is also among the cities that has announced a bid to host Eurovision 2023.

Which UK cities have expressed an interest in hosting Eurovision 2023?

The city’s council said it has told Eurovision organisers that Sheffield would ‘love’ to hold the contest after the EBU and BBC confirmed the UK will host in place of Ukraine. ‘We’ve told Eurovision we’d love to host… watch this space,’ Sheffield City Council tweeted.

Bev Craig, leader of Manchester City Council, also said the city would be applying to host Eurovision in 2023.

She tweeted: ‘Manchester will be bidding to host @Eurovision @bbceurovision.

‘A world class music city, brilliant venues, experience in hosting major events, and of course one of the UK’s largest Ukrainian populations – we are confident we will make it a Eurovision to remember. More to follow.’

Glasgow also previously expressed an interest in hosting the contest with the city’s OVO Hydro arena saying it would be ‘delighted’ to be involved in discussions.

In June, Scotland’s First Minister Nicola Sturgeon also backed the city to host, tweeting: ‘I can think of a perfect venue on banks of the River Clyde!!’

‘The BBC has taken on hosting duties for other winning countries on four previous occasions.

‘Continuing in this tradition of solidarity, we know that next year’s contest will showcase the creativity and skill of one of Europe’s most experienced public broadcasters whilst ensuring this year’s winners, Ukraine, are celebrated and represented throughout the event.’

‘Following a request from the European Broadcasting Union and the Ukrainian authorities, I’m delighted that the BBC has agreed to step in and host next year’s contest.

‘I’m just sorry that, due to Russia’s continued acts of bloodshed, it has not been possible to host the event in Ukraine, where it should be. 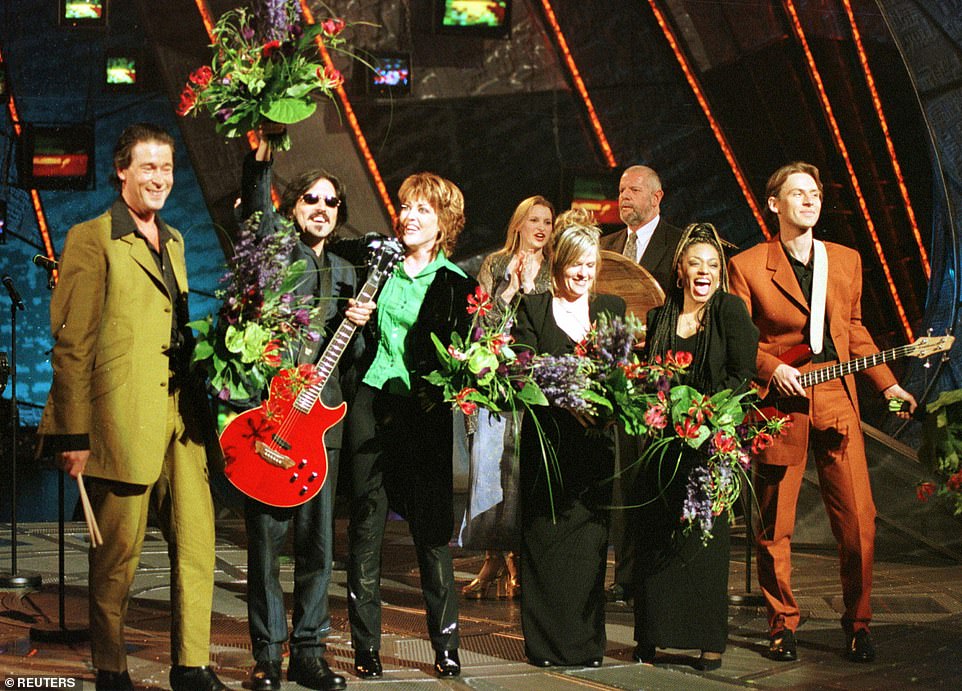 The 1998 Eurovision Song Contest was held in Birmingham after Katrina and the Waves won with ‘Love Shine a Light’ in Dublin the previous year (pictured posing in May 1997 following their win), which remains the last time Britain was victorious

‘As hosts, the UK will honour the competition’s spirit and diversity, and, most importantly, ensure it reflects Ukraine’s recent Eurovision victory and Ukrainian creativity.’ 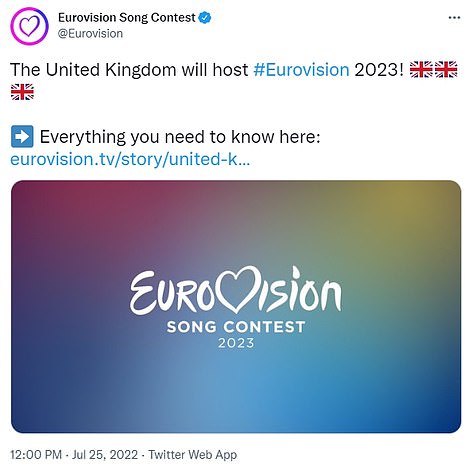 Mykola Chernotytskyi, head of the managing board of UA:PBC, said: ‘The 2023 Eurovision Song Contest will not be in Ukraine but in support of Ukraine. We are grateful to our BBC partners for showing solidarity with us.

‘I am confident that together we will be able to add Ukrainian spirit to this event and once again unite the whole of Europe around our common values of peace, support, celebrating diversity and talent.’

And Tim Davie, director-general of the BBC, added: ‘It is a matter of great regret that our colleagues and friends in Ukraine are not able to host the 2023 Eurovision Song Contest.

‘Being asked to host the largest and most complex music competition in the world is a great privilege. The BBC is committed to making the event a true reflection of Ukrainian culture alongside showcasing the diversity of British music and creativity.

‘The BBC will now begin the process to find a Host City to partner with us on delivering one of the most exciting events to come to the UK in 2023.’

This year’s contest in May saw Ryder top the jury vote before Kalush Orchestra went on to win overall following a symbolic show of public support which saw them soar to first place with 631 points.

They had been the frontrunners since Russia’s invasion of Ukraine in February – which prompted organisers to ban the Russian entrant from competing.

Eurovision Song Contest 2023: How will the bidding process work and which UK city could host the event?

The European Broadcasting Union  and the BBC have announced that next year’s Eurovision Song Contest will be held in the UK on behalf of Ukraine. The BBC will act as host broadcaster of the 67th annual competition after the UK’s Sam Ryder came second this year. Here are answers to a few of the key questions surrounding the process:

– How will the bidding process work?

The BBC has confirmed that the process to select the host city for the 2023 contest will begin this week.

It will manage the bidding along with the EBU and expects it to be completed by the autumn.

The BBC said relevant information for prospective hosts will be issued shortly and host cities wanting information packs should make contact via an allocated email address.

– Where has the contest previously been hosted in the UK?

It last hosted the Eurovision Song Contest in 1998 in Birmingham following Katrina And The Waves’ victory in Dublin with Love Shine A Light.

Hosting it in 2023 will make it the ninth time the competition has taken place in the UK – more than any other country.

– How has the UK fared in Eurovision previously?

This year, British hopeful Ryder won over the audience with his uplifting pop song Space Man, taking second place in the competition in Turin, Italy.

It was a stark contrast to 2021 UK entry James Newman, who scored zero points and came bottom of the leader board.

The UK holds the record for the longest run of consecutive appearances in the Grand Final – 59 – and has also finished second a record 15 times.

– How much would hosting it cost?

Hosting Eurovision can be expensive.

Azerbaijan spent a reported £48 million on hosting the event in 2012, and Hungary withdrew from competing in the 2010 contest in part due to the global financial crisis.

It is not clear whether the BBC will have to pay to host the contest from its current licence fee allocation or if it will be given further money.

It comes as the BBC needs to save a further £285 million in response to Culture Secretary Nadine Dorries’ announcement in January that the licence fee will be frozen for the next two years.

The UK already spends more on Eurovision than most participants.

It is part of the so-called big five alongside France, Germany, Italy and Spain, who each get a free pass to the Grand Final because of their financial contributions.

Ukraine will automatically qualify for the Grand Final in 2023 alongside the Big Five.

London’s O2 is a strong contender as the largest indoor arena in the capital.

The 20,000-capacity venue has hosted some of the biggest stars in the world, including Adele, Queen + Adam Lambert, Billie Eilish, The Rolling Stones, as well as events like the Brit Awards.

The OVO Arena Wembley could also be in contention as the second largest in London, with a capacity of 12,500.

A return to Brighton would be a nice homage to when the Brighton Dome hosted the event in 1974, when Abba won with Waterloo.

Venues within major UK cities such as Liverpool, Manchester or Newcastle could be considered in line with the Government’s ‘levelling up’ plan.

The OVO Hydro in Glasgow could also host the contest for the UK as the largest entertainment venue in Scotland with a maximum capacity of 14,300.

A tweet from Sheffield City Council said it has told Eurovision organisers the city would ‘love’ to stage the contest.

And Bev Craig, leader of Manchester City Council, tweeted: ‘Manchester will be bidding to host @Eurovision @bbceurovision. A world class music city, brilliant venues, experience in hosting major events, and of course one of the UK’s largest Ukrainian populations – we are confident we will make it a £eurovision to remember. More to follow.’