There’s one very cheeky question that everybody at the BBC wants to ask Evan Davis. It’s not about politics or Newsnight or whether Deborah Meaden is as scary on Dragons’ Den as she looks. It’s about his nickname around the Beeb – Tinsel T*** – and whether the rumours really are true that under his business suits he has nipple rings and a more intimate piercing?

Davis laughs like a good sport. ‘I’m not going to answer it. But it was mildly helpful when people asked, because it became the most exotic and interesting thing about me, to be honest. I think it’s better to maintain an allure of mystery than to actually answer!’

As the host of PM Evan Davis will now face the daily challenge of trying to steer us all through the bewilderments of Brexit, whatever happens next

I can’t see any signs of anything under his thin white T-shirt so we’ll move on. Davis has just quit as host of Newsnight to take over at PM, Radio 4’s flagship early evening current affairs show, which is hugely respected but not nearly so glamorous. Why has he done that?

‘Radio is a medium that suits me better and I enjoy it more,’ says the 56-year-old, who has grown a salt-and-pepper beard since he came off the television.

Is he trying to say he has a face for radio? ‘Yeah, I was,’ says Davis, grinning. ‘Actually it’s not about the looks: it’s about having to think about how you’re presenting yourself. I find that takes quite a lot of energy. You can’t think straight. So if I’m interviewing you on TV, I have to be like this…’

He sits up straight, adjusts an imaginary tie and tries to look interested. ‘If I’m interviewing on radio, I can be like this [leaning back], scrawling little things on a piece of paper…’

Davis looks relaxed enough today, padding around his beautiful, modernised Victorian home in Kennington, south London, in his socks, black skinny jeans and a slightly punky white Diesel T-shirt, but he gives long, serious answers to every question (as long as it is not about his nipples).

‘I didn’t want to do Newsnight for ever, because it’s an intense job and unsociable due to the hours. I would have liked to have gone on, but if something like PM comes up and you say no then someone else gets it, and there’ll be no vacancy for another ten years.’

At this point his partner Guillaume, a landscape architect from France, walks into the room with an elegant, streamlined whippet called Mr Whippy. ‘He’s so handsome,’ says Davis, talking about the dog rather than his partner. ‘He’s got a face for television!’

The couple met in a bar in 2002 and have been together ever since, entering a civil partnership in 2013. They celebrated with a party at their holiday home in Normandy.

Davis graduated from Oxford with a first in politics, philosophy and economics and took a masters at Harvard before joining the BBC as an economics reporter, then editor. He has been the host of Dragons’ Den for 16 seasons.

The most-listened to radio station in the UK is Asda FM, which reaches 18 million people a week (Radio 2 manages 14.6 million).

‘I’m on screen in Dragons’ Den for maybe a minute a programme. My voice is over the rest of it. My face should be better known as a news person, yet on the streets a lot more people still say, “Oh, you’re the guy from Dragons’ Den”.’

Four years ago he began presenting Newsnight, replacing the combative Jeremy Paxman with a gentler approach. ‘If you take the view, as I do, that politicians are trying to do something quite difficult, you don’t only want the accusing style of interview,’ he says. ‘You want some warmth and curiosity.’

He was brought in by Ian Katz, a former Guardian editor, who was accused of dumbing down the programme with stunts such as Kirsty Wark dancing to Michael Jackson’s Thriller at the end of a Halloween edition. ‘I didn’t really notice it dumbing down,’ says Davis. ‘People put too much weight on one or two moments like that or Emily Maitlis interviewing the Honey Monster. I don’t think that by appointing me they were dumbing down. I think you want it to look like it’s dumbing down while actually being deeply intelligent.’

There was outrage when it was revealed that Davis earned up to £299,000 a year, while his fellow Newsnight presenter Emily Maitlis didn’t even make the list of those making £150,000, but he kept a discreet silence during the scandal and only said afterwards: ‘I think you’ll find that’s now been rectified.’

He must have had a pay rise now, too, because his predecessor at PM, Eddie Mair, was listed as earning £300,000-£350,000 a year before joining LBC last summer. Davis joked on Twitter: ‘Enjoyed four years of being told I’m not as good as Paxman. I look forward to people saying I’m not as good as Eddie Mair.’

How has PM changed? ‘It’s not as funny. I’m not trying to live up to Eddie’s wit. I remember he was interviewing Boris Johnson and Boris said, “If I can just come back to the other question you asked before…” And Eddie said, “No, this isn’t a Two Ronnies sketch where you answer the question before last.” It was just so quick.’ 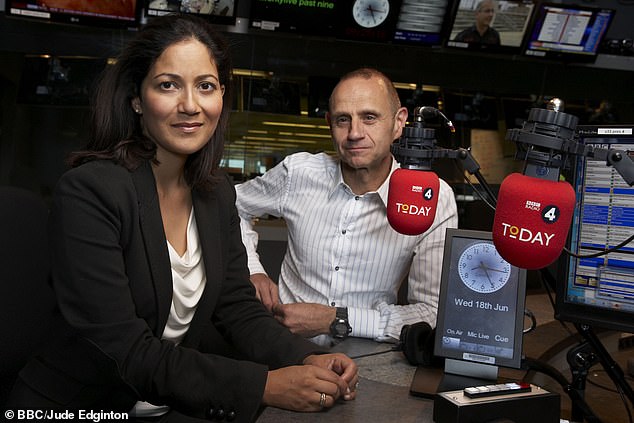 Was he tempted to go for Question Time when David Dimbleby announced his retirement? ‘I was thinking I should put my name into the ring. But PM came up at about the same time and it became apparent you could put your name in for one but not both.’

Nick Robinson was the only man to be auditioned for Question Time; Fiona Bruce got the job. Jeremy Clarkson this week blasted the BBC, saying it was ‘suffocating the life out of everything with its nonsense need to be politically correct’, adding: ‘Poor old Nick Robinson going for an interview – what a waste of petrol that was. No chance he was going to get it.’

It’s pretty clear the BBC bosses wanted a woman. Does he resent that? ‘I can’t take a public position on this,’ he says, laughing. ‘But it was obviously going to go to a woman. The BBC has quite rightly decided to make sure we have a more gender-balanced portfolio of presenters in main roles.’

Davis will now face the daily challenge of trying to steer us all through the bewilderments of Brexit, whatever happens next. ‘I’ve got a holiday booked in early February. I’m just thinking, “Oh crumbs, are we going to get that week off?” We might want to be trying to claim that one on insurance.’

Does he agree that our politicians have made a right mess of this? ‘I’m slightly more in the camp that says, “Give the politicians a break, they’re doing their best to execute some really difficult and not terribly clear instructions.” ’

The BBC is accused of bias by people on all sides, so does that mean that it must be doing something right? ‘It is absolutely essential that the BBC sees its job as trying to be fair to both sides. That doesn’t mean allowing lies on either side to go through unchallenged.’

That can be hard in the midst of Brexit. ‘It’s very easy to get stuck in the weeds of a conversation about border controls and trading rules and what’s possible and what’s not. And I think it has thus been difficult to hold politicians to account when they make claims about these things that may or may not be true. That can get you stuck in a very detailed conversation that is either over the heads of the listeners or sometimes over the heads of most of us presenters. We’re in complicated terrain.’

Fairness is needed now more than ever from presenters too, he says. ‘There’s polarisation on economics. There’s a generational and cultural polarisation too, whether it is focused on same-sex marriage or transgender rights. These are issues that are more ferociously dividing the country than at any time since I’ve been alive.’

One of them is an issue personal to him as a gay man who came out in his mid-20s, deciding to tell his parents over Christmas lunch. ‘It came completely out of the blue to them. They were clearly taken aback but the next morning they were totally supportive about it and have been ever since.’

Something Davis has had to learn to deal with is an interest in the way he looks – mainly because of the contrast between his suits on TV and paparazzi snaps of him in jeans, biker boots and T-shirt with a chain dangling from his belt. ‘We get paid very handsome salaries and we put ourselves in the public eye. I think taking shots of people across a road is impolite. But it wasn’t through a bedroom window or something.’

Has he had to modify his dress sense? ‘A little bit but I don’t make a big deal of it.’ We’re back to the subject of nipples, so let’s jump back to calmer waters for a last question. It’s about Brexit, inevitably. Davis must be one of the best-informed people in Britain. Has he any idea where this country is heading?