Even HEALTHY people may be sickened by the weekend inferno, doctors warn

A brutal heat wave is set to sweep the East Coast and Midwest of the US, with the capitol, New York and Cincinnati expected to hit dangerous temperatures above 100 degrees.

Temperatures that hot will put even healthy people at risk of heat stroke, prompting the mayors of Washington, DC, Philadelphia and New York City to declare heat emergencies and activate cooling stations.

On average, 658 people die in the US each year, making high temperatures the top weather-related cause of death.

This year is set to be the hottest the world has ever seen, and as the planet’s temperature rises, heat waves getting hotter, longer and deadlier.

And even relatively healthy people on blood pressure medication need to take steps to protect themselves from developing heat stroke and suffering its potential, lasting brain effects.

It’s more critical than ever to keep cool, and two experts shared their best advice on the signs of heat stroke and life-saving steps to take in the coming, sweltering days.

The heat wave sweeping the US is set to hit its zenith on Saturday, with temperatures reaching their highest numbers since the 1930s in some states – putting even healthy Americans at risk for heat-related illnesses, doctors warn

Meteorologists expect temperatures in Washington, DC, to get as high as those in California’s infamous inferno, Death Valley.

And that puts 185 million people at risk for heat illnesses, including the more obvious groups, like the sick and elderly, as well as people who are relatively healthy and just taking blood pressure medication preventatively.

Dr Alison Huffstetler, a family practitioner and professor at Georgetown University told DailyMail.com that ‘people who are on diuretics that get rid of extra fluid are kind of dehydrated – that’s how [the medications] work to lower blood pressure – are also at risk.’

Over 55 million people in the US take some form of blood pressure medication.

She adds: ‘They don’t have to be sick, they just have to be on this blood pressure medication to be at-risk.’

The capitol is just one of many US cities that will suffer the heat wave hitting the East Coast and Midwest this week.

Cities will be the hardest hit, as concrete and asphalt surfaces hold heat and radiate it back into the air even after the sun has gone down.

The other category is ‘younger, fitter people [who are] either working outside or in confined spaces without A/C and people doing athletics,’ explains Dr Robert Shesser, chair of the department of emergency medicine at George Washington University.

The latter group are ‘people who tend to be really active, they’re weekend warriors, and they’re more acclimated to that kind of exertion, but any kind of prolonged activity in extreme heat’ can become dangerous, says Dr Huffstetler.

‘There’s no reason to say don’t do it, just do it in smaller chunks.’

Fit, workout-aholics are not likely to get life-threateningly sick from heat, but if they don’t listen to their bodies, their symptoms could progress to heat stroke, which can do lasting brain damage.

Most heat-related deaths occur among those who are 65 and older or have multiple chronic illneses.

‘They may have a perceptual impairment, so they don’t realize they’re getting hot, and a lot of medications they’re on – like those for heart failure and neurological disease – make them less tolerant to heat,’ Dr Shesser told DailyMail.com.

In his emergency department, ‘we see a lot of very sick people, and they heat is playing a very serious factor in their disease…a lot of people have a lot of chronic medical problems out there. 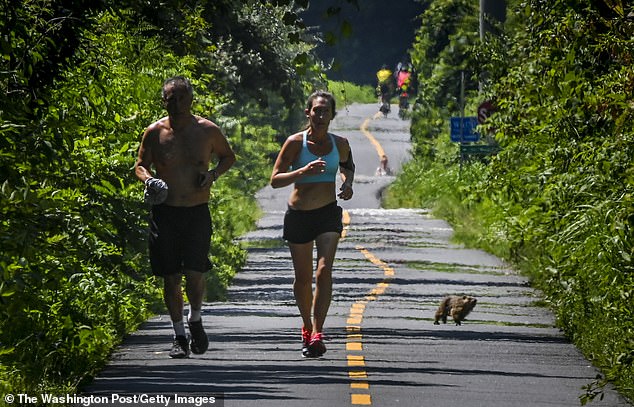 Active young people, like these Washington, DC, runners (and a groundhog) may think they’re acclimated to the heat, but high humidity keeps more heat trapped in the air, rendering sweating, which cools us, insufficient

THE SPECTRUM OF HEAT ILLNESSES: FROM RASH TO STROKE

Heat sickness starts simple, but can ramp up to become devastating.

‘People can get anything from a rash, which goes away pretty quickly, to heat stroke, which is most severe.

Heat rash is fairly simple to recognize, causing raised, reddened bumps. It isn’t dangerous, but might be a good sign that you should get out of the heat as soon as possible.

HOW TO DRINK AND EAT IN THE HEAT

Make sure to drink plenty of water, but not so much that you waterlog yourself and upset your balance of water and sodium.

While you need some sodium to stimulate your thirst and keep your muscles from cramping, extra salt will just deplete the water you need to sweat and cool down.

Certain fruits and veggies are great sources of water as well as nutrients that keep your body functioning as well as possible in overbearing heat.

It’s important to avoid diuretic foods and drinks in the heat wave because these encourage your body to purge excess water and salt, which you need to stay cool.

And, of course, consuming alcohol will dehydrate you, buy depressing anti-diuretic hormones that tell the body to reabsorb water

DO DRINK AND EAT: Hydrating Foods and beverages

DO NOT DRINK OR EAT: Diuretics, salty foods or alcohol dehydrate you

From heat rash, you might next notice sunburn, which makes it more difficult for the body to cool itself, then spectrum progresses to heat cramps, heat syncope – or fainting – heat exhaustion and, finally, heat stroke.

‘But you don’t have to go through each step to get to the next,’ Dr Huffstetler notes.

Heat illnesses happen when the body’s normal mechanisms for cooling itself fail against the heat and humidity, which make sit harder for heat to move from your body into the atmosphere.

If your body is failing to cool, you’ll start sweating excessively, but body temperature will keep rising.

As someone reaches heat exhaustion, they’ll develop ‘heavy sweating and cold, pale skin, they’ll get a weaker pulse so it might be faster but not very strong.’ Dr Huffstetler says.

WHEN TO BE WORRIED: CONFUSION MEANS IT’S A HEAT EMERGENCY

Symptoms of milder forms of heat illness – all the way up the spectrum until heat stroke – will typically subside within an hour, once you get out of the heat.

But there are a few clear signs that heat stroke is coming on.

Dr Huffstetler advises that if someone’s temperature stays above 104 degrees for over an hour – for 30 minutes if they have a heart condition –  they need medical attention.

‘The person would either not be responding or in a totally bizarre way…like somebody on drugs,’ says Dr Shesser.

When heat stroke strikes and an altered mental status sets in, ‘their neurons are not functioning properly,’ he says.

‘They can have diffuse swelling of the brain tissue and can get a condition where the brain doesn’t clot and they have a variety of things going on.’

Heat stroke this severe is rare in younger people, but it does happen and can prove fatal or life-changing.

‘Some people lose consciousness but are completely fine the next day, but in others, it looks like a regular stroke, and they have difficulty walking or talking,’ Dr Huffstetler adds.

If someone becomes confused and is suffering heat stroke they need to be seen by a doctor as soon as possible to get IV fluids and have their bodies cooled carefully with supervision.

‘It’s probably unnecessary to say you’re not going to go outside on a hot sunny day,’ says Dr Huffstetler, but you should monitor just how much time you spend out in the scorching sun.

‘Take frequent rests where you get out of the heat and go to a cool place,’ says Dr Shesser.

‘Like how firefighters work in shifts – they might rotate every 30 minutes, but in a heat wave they’d do it every 10 or 15 minutes, so if your normal work interval is an hour, make your breaks more frequent.

When you get to a cool, shady place, be sure to sip, not gulp down, cool, not cold water, because your body will actually be able to absorb this more efficiently.

You can use a damp cloth to cool your skin, and Dr Shesser says you can even use slightly warm water to ‘lead heat away from your skin.’ 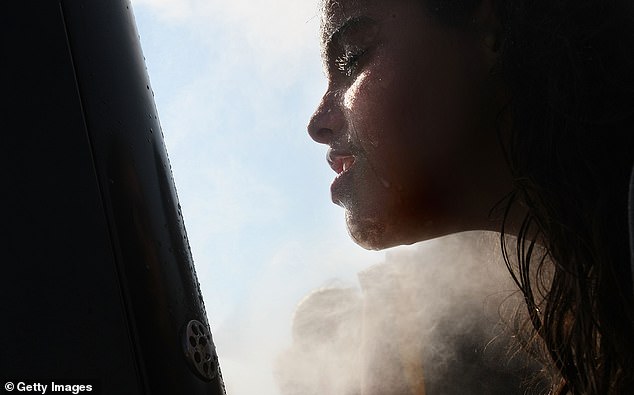 If the situation is really dire, an ice bath might be necessary to bring body temperature down.

Especially for those living in urban areas or who are under-housed, getting somewhere cool might not be as simple as walking inside from the backyard.

But Dr Huffstetler shared some tips for free places most cities have to get cool.

Cities like New York have activated their cooling stations where misters and shade can provide welcome relief to hot city dwellers, and ‘most big cities release maps that have lists of public pools, public cooling centers and indoor cooling places you can go to for free.’

And if those aren’t an option, ‘go to a mall or a library,’ she adds.

She also reminded DailyMail.com that ‘leaving kids in cars, even with the windows cracked for a short period of time, the temperature still rises exceedingly quickly.’

There’s no safe amount of time to leave a child in a hot car and, in fact, it can be considered neglect or abuse.

She also stresses that air conditioning and cool water are key if heatstroke is oncoming.

‘Just using an electric fan is really not effective if the temperature is over 90 degrees,’ she says.

‘It may make you feel better, but they don’t prevent heat-related illnesses.’